By Adnan Khan In our last article, one of the top 10 global issues of 2013 we have mentioned was the invasion of Mali by the West. As soon as 2013 started, French military forces started Operation Serval and began pounding targets in Mali backed by air support and a multilateral African force. French Foreign Minister Laurent Fabius said the deployment was necessary to “stop the advance of criminal and terrorist groups,” with President Francois...
18th January 20135 min 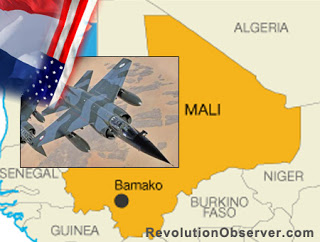 By Adnan Khan
In our last article, one of the top 10 global issues of 2013 we have mentioned was the invasion of Mali by the West. As soon as 2013 started, French military forces started Operation Serval and began pounding targets in Mali backed by air support and a multilateral African force. French Foreign Minister Laurent Fabius said the deployment was necessary to “stop the advance of criminal and terrorist groups,” with President Francois Hollande adding that the troops would stay “as long as necessary” to halt the nations slide into the hands of extremists.[1] Irrespective of the statements coming from the West there are four issues that need to be addressed in order to understand why Mali is the latest nation on the West’s radar.
Firstly, Mali was thrown into turmoil when junior military officers overthrew the civilian government a month before general elections were to take place in April 2012. Under Mali’s constitution a President cannot seek a third term and the ousted President did not express any intention in seeking it neither, nevertheless a coup still ensued. The coup that took place was with the help of the US, US diplomats confirmed that: “The coup leader Captain Omedua Ahmedou Haia Sanogo had been chosen from among elite officers by the U.S. Embassy to receive military training to combat terrorism in the United States.” He added that “Sanogo travelled several times to America on special missions …“[2] The US had only recently expanded ties with Mali signing a number of deals, including agreements to train Malian forces through hand picking officers that would travel to the US for training.
Secondly, as a result of the coup carried out by junior officers against their senior officers, security in the country fell apart and the whole North of Mali was taken over by the Tuaregs and a number of Islamic groups in the region. The Tuaregs eventually lost out to the Ansar Deen faction, which continues to rule the north of Mali and calls for the Shari’ah to be implemented in all of Mali. The junior officers who undertook the coup have failed to halt the expansion of the Ansar Deen southwards and have capitulated in the face of this onslaught, as a result losing a number of key towns in central Mali. Amongst them the recent loss of Konna, a strategic town in the center of the country, was a big blow to the coup officers.[3]
Thirdly, the French have, ever since the coup, been busy in constructing a coalition force to intervene in the country in order to win the country back. Mali is central to French plans in Africa and reinstalling a civilian government from the French constructed political class is now its aim. The French have accused the whole North of Mali to be under the control of extremists linked to al-Qaeda who will expand their way of life thus making intervention a necessity. The French plan is to intervene in the country using the extremist threat in the North in order to reverse the gains by the Ansar Deen and then regain control from the army who ousted the civilian ruler. The military coup in March 2012 threatened to shift Mali from the French sphere of influence into the American. The French intervention in northern Mali is a pretext for regaining Mali.
Fourthly, the French intervened well before a multilateral coalition was fully constructed and hurried in its intervention of the country. This is because the French are extremely worried about US actions in West Africa. The US, since the Mali coup, increased its contacts with Algeria and signed a number of strategic deals. Algeria is extremely important to Europe and not just France due to its energy as well as its strategic location in the African continent. Hillary Clinton confirmed after her meeting with Algerian President Abdelaziz Bouteflika In October 2012: “We discussed our very strong bilateral relations, and we have indicated that we had just finished an excellent strategic dialogue hosted by Washington last week. We had very deep talks on the situation in the region, especially in Mali.“[4]
Mali is now the latest nation in the scramble for Africa. The recent history of foreign interference in Africa has seen many setbacks for the West, especially in Somalia. The initial French intervention has been given much airtime, what hasn’t been given much airtime is the response by the rebel groups, one French official highlighted: “At the start, we thought they would be just a load of guys with guns driving about in their pickups, but the reality is that they are well-trained, well-equipped, and well-armed, from Libya they have got hold of a lot of up-to-date, sophisticated equipment which is much more robust and effective than we could have imagined.“[5]
The invasion of Mali has taken place as the Western world continues to turn a blind eye to the slaughter being committed by Bashar al-Assad in Syria. Throughout, the Western powers used their usual slogans of ‘war on terror’ and ‘extremism’ as a pretext for this invasion. All of this was possible because countries neighboring Mali joined the French effort facilitating logistical support, provided bases and supply lines. Without this the Western objectives would not be possible. The events in Mali are just another Western military intervention aimed at maintaining their interests within the region.

Syria: Assad on the Defensive