By Abu Anas There was a lot of buzz in the media, this past August, due to the retirement order of the top two military leaders of Egypt’s army, Defense Minister Field Marshal Hussien Tantawi and Chief of Army Staff Lt. General Sami Annan.[1] The astonishment was due to the fact that the newly elected president who has set the order, Mohammed Morsi, was from an Islamist movement, The Muslim Brotherhood, which had lots of...
7th September 20125 min 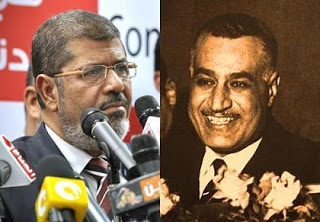 By Abu Anas
There was a lot of buzz in the media, this past August, due to the retirement order of the top two military leaders of Egypt’s army, Defense Minister Field Marshal Hussien Tantawi and Chief of Army Staff Lt. General Sami Annan.[1] The astonishment was due to the fact that the newly elected president who has set the order, Mohammed Morsi, was from an Islamist movement, The Muslim Brotherhood, which had lots of friction with the military since Nasser’s time and was thought to be incapable of such radical change.
During most of Egypt’s modern history, since the coup by Gamal Abdel Nasser in 1952, the country has been in control and directly ruled by military personnel. First it was Nasser, then Anwar El-Sadat who was finally followed by the recently deposed Hosni Mubarak, all being from the military. The power resided within the military institution that controlled every aspect of state affairs, as such simple elections would not transfer power automatically to a civilian leadership overnight. It is well understood within the circles of think tanks and policy makers that such a move of removing the heads of the military in a situation like Egypt cannot be done without the consent of the military junta represented by the Supreme Council of the Armed Forces (SCAF).[2] That’s why some military analysts have concurred that the new appointment of the defense minister is such that it “reflects the staying power of Mr. Mubarak’s old military order.“[3]
Nasser, even though outwardly was anti-West, was actually a US ally that helped spread American influence in the Middle East, as has been confirmed by the CIA and its covert operatives later on.[4] The US has been always in-sync with the Egyptian administrations since then so they secure their interests in the region. The US would be aware of any move that might destabilize the current regime and status quo inside Egypt. Surely enough, the State Department knew about the changes within the military establishment before they happened as has been reported by its spokeswoman saying, “Hilary Clinton knew of ongoing discussions about a new defense team and was told during talks with President Morsi in Cairo last month that the change would be made ‘at an appropriate moment.’“[5] Commenting on the new appointed personnel for the defense ministry and army, the US administration said that, “Egypt’s new top military officer is a known commodity in Washington.“[3]
After around 30 years of tyrannical rule by Mr. Mubarak, as was the case in many Middle Eastern countries, people were fed up due to the political, economical and social repression, which created major instability towards the regime and to US foreign policy in the region. Political Islam was on the rise due to its natural affinity with the majority Muslim populace and due to the essence of Islam’s call to justice, mercy and ruler accountability which were all missing in people’s lives.[6] The US had to come up with an alternative in such a volatile situation by cooperating with “liberal” Islamists, like the Muslim Brotherhood, and help them get to power as long as they serve US interests. The secular US-allied military leadership would continue to be America’s insurance policy against any Brotherhood misbehavior, and the secular political parties would act as a check and balance upon them.
The last regime under Mubarak was busy dealing with internal strife against militants after the assassination of El-Sadat and during the tourism killings in the 1990’s, which rendered it unable to continue playing its important strategic role in the region. Egypt was transformed from being the centerpiece of the Arab world during Nasser to a deteriorating police state spending most of its resources wrestling with its own people. Ever since the internal stability has been secured, the US is now trying to revive that lost Egyptian “Nasser” role within the Arab world through the Muslim Brotherhood. Morsi has mentioned “Gamal Abdel Nasser” in his speech during his participation in the Non-Aligned Movement meeting in Tehran, August 30th, and said that “The new Egypt … is seeking a … real participation in the international affairs.“[7]
This pragmatic approach instituted by the Brotherhood comes at a time where their interests have intersected with those of the US resulting in this new marriage between America and the Islamist (though liberal) movement. To be clear, Morsi does not hold power in Egypt since the real power brokers are the military junta who have retreated behind the scene and left the daily running of the state to the Brotherhood. The Brotherhood’s foreign policy, just like any other satellite country, revolves around and is directly tied to a global power, in this case the US. If indeed, the Brotherhood are promising a “new” Egypt that can really play an independent and active role in the world, then it is imperative that US hegemony over Egypt is stopped, otherwise, Morsi will indeed become a Nasser, just another pawn within the US grand strategy.

US Ties To Syrian Rebels

Egypt: Enemy or an Ally?