By Abu Anas The goal of mainstream media outlets is the shaping of people’s viewpoints based on the agendas of governments and multinational corporations. Therefore, the Muslim political observer, without an official media outlet to reflect his strategic and vital interests, is left to be bombarded by anti-Islamic propaganda that purposefully misinforms and distorts reality. This has led to the misconception that the relationship between the United States and Syria is filled with animosity. This...
21st August 20125 min 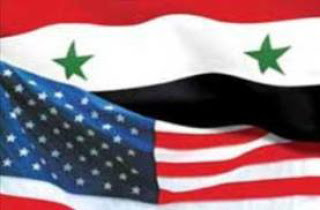 The goal of mainstream media outlets is the shaping of people’s viewpoints based on the agendas of governments and multinational corporations. Therefore, the Muslim political observer, without an official media outlet to reflect his strategic and vital interests, is left to be bombarded by anti-Islamic propaganda that purposefully misinforms and distorts reality. This has led to the misconception that the relationship between the United States and Syria is filled with animosity. This article will be the first of a two part series discussing this topic.

For anyone to be able to explain the relationship between different countries one must understand the interests of these countries and their political actions must be analyzed so one can define what type of relationship they have. The media has suggested that the Syrian regime is part of the Iranian “axis of evil” which jeopardizes the US interests in the region. Iran has a strategic depth extending through Iraq, Syria, Lebanon and even Bahrain, Yemen and Gaza. The Syrian regime, of all of these players, stands out as the strongest ally to Iran and is a pillar in its ability to project power into the Arab world. Based on this assumption, analysts have said that it is the strategic interest of the US to bring down the regime to undermine the Iranian influence in the region. They add that eliminating Syria from the Iranian sphere of influence will deal a great blow to Iran’s expansionist strategy.

The political observer realizes that such an assumption is false through the examination of the political actions by the US towards the Syrian regime since the beginning of the revolution. One would be assured that if the above understanding of the US-Syrian relations were true then the US would have nurtured relationships with the Syrian opposition inside Syria from day one and even before the revolution. The first fact is that the US has left the regime to crack down upon the peaceful protests for months despite raw footage showing inhumane and totally savage behavior of the Assad militias (“shabiha”) towards innocent civilians. Aside from empty rhetoric and lip service from the US administration, nothing concrete was applied to support the rebels. Even the US ambassador to Syria stayed in Damascus under the guise of trying to collect information on the ground. The political cover that the US has provided to the regime, through the Arab League and the UN, cannot go unnoticed to even the amateur political observer and certainly not to the Syrian rebels.

The second fact, which is of greater importance, is the US not providing any military support to the Free Syrian Army (FSA), and until just recently giving a green light to Saudi Arabia and Qatar to fund the smuggling of meager weapons to the rebels. The US administration refused to  support the FSA with weapons under the excuse of not wanting to further militarize the conflict and just recently under the guise of Islamist composition of the FSA. It is of paramount importance to know that what is needed to bring down the regime in a relatively short period of time is to provide portable anti-tank and anti-aircraft weapons. The FSA has specifically requested RPG-29 and SAM-7 supplies, something which is very easy for the US to provide. The US has given more sophisticated weaponry to the Afghan freedom fighters during the invasion in the 1970s which brought the Soviet Union to its knees. That kind of support can be used as the benchmark for when the US wants to bring down a regime. It is very clear that the US has behaved in a totally different fashion with the Syrian rebels.

A couple of issues that can be brought up by skeptics are the mistrust of some FSA factions and not having a unified and clear command for the FSA overall. First, if the Syrian regime was that much of a threat to the US, then supporting its enemies to cause its demise would be a priority. Second, the US could have from early on signaled that it will militarily support the opposition and it would have been very easy to connect with one of the defectors that would fulfill the US interests. When the US publicly supports that FSA personnel and its faction with the needed weapons, all future defectors will naturally fall in line under its leadership. This fact was confirmed by a Syrian financier to the rebels who was quoted as saying: “The number of fighters each commander can summon wax and wane with his ability to arm and pay them and their families, so there is no particular leader with enough clout to bring the brigades together.“[1] So both questions can be easily resolved when you supply such a contact with the needed weapons and the rest is a trickle down effect.

It can be seen clearly from the above analysis of the US relationship with the Syrian regime that the US prefers this regime to continue and that there is no hostilities, at least not to the level the mainstream media would like to propose is the case. The Syrian regime has secured the US interests in the region, specifically toward Israel, and the US is very happy to continue such a relationship, if possible, for the future. The Syrian people in general, and the rebels in specific, have to realize that the real support to the regime is coming from Washington first and foremost and not only from Moscow and Tehran!
[1] http://www.guardian.co.uk/world/2012/aug/13/syria-opposition-groups-national-council
previous