By Abu Anas The United States’ strategy employed on the Syrian political theater has been outlined in detail in a prior article we have posted. We have summarized the current US strategy in thwarting the revolution using the proverb, “if you can’t beat them, join them.” It is important to understand the different plans that the US could utilize to achieve the implementation of this strategy. Keeping in mind that the power elements on the...
16th August 20125 min 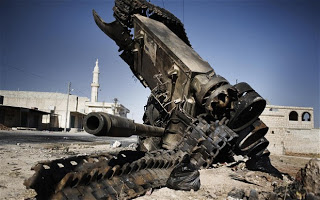 The United States’ strategy employed on the Syrian political theater has been outlined in detail in a prior article we have posted. We have summarized the current US strategy in thwarting the revolution using the proverb, “if you can’t beat them, join them.” It is important to understand the different plans that the US could utilize to achieve the implementation of this strategy. Keeping in mind that the power elements on the ground are two: the rebels (through the FSA) and the regime (through the military institution), the US has three methods to reach its goals.

The first option is infiltrating and influencing the FSA to obey a chain of command that is loyal and controlled by the US. The purpose of such a plan is to steer the rebels away from their goal of bringing down the regime and to sit down at a negotiation table with some of its “acceptable” elements to reach a compromise solution and to form a unity transitional government. The US could encourage some of the loyal military officers to defect from the army and to act as an inside agent to influence the rebels. Many different types of carrots and sticks can be used to make the rebels comply. Offering bribes, weapons, promising prestigious positions in future Syria, and many others can be used to seduce some rebels. Psychological warfare, for example the rumors about the regime’s plan to use chemical weapons against the rebels, and the regime’s military warfare left by a watching world to massacre civilians are two examples of using the stick to subdue the rebels and to destroy their hopes and crush their morale.
The second option is to advise the military to conduct a pseudo-coup against Bashar al-Assad and to “publicly” defect and side with the revolution. This tactic was employed in Egypt, Tunisia and certainly in Yemen where the half-brother of Ali Abdullah Saleh defected and appeared to side with the revolution. The goal of such a move is to maintain the old regime by preserving what is left from the military institution. In such a scenario, after this far in the revolution, one would expect a defection followed by some carefully managed fight between some factions close to the al-Assad regime, like the 4th Army Division or the Republican Guard, and even the killing or arresting of Bashar al-Assad himself. This way, the rebels will not have any reason to fight, and a request to disarm the rebels under the guise of rebuilding the state and its institutions and national security will be more acceptable to the Syrian public opinion.
The third option is the US last resort, employed if all other options fail, which is the direct military invasion of Syria to secure its interests in that country. That invasion can take two forms, either through a United Nation’s military mission under the 7th chapter of the UN charter or a NATO ground invasion by Turkey and an air-cover conducted mainly by the US. The invasion will be conducted under the guise of saving the civilians from a human tragedy in a similar fashion as in Libya and to protect Syria from chaos and civil war during the transitional period after the demolition of the regime. In this scenario, one would expect the cooperation of the Syrian military in instigating the necessary steps that leads to international intervention and to be part of a war play that might have some parts of the army as scapegoats. The military campaign should seem friendly to the Syrian people and not as an occupying force.
The first option has failed miserably and the US seems to have lost hope in unifying the FSA under its preferred umbrella, the SNC.[1] Due to the rebels’ success in shaking the regime without any international help, a sense of urgency to directly try to affect the outcome of the revolution is surfacing in US talks. This is noticed in the meeting between Secretary of State Hillary Clinton and Turkish Foreign Minister Ahmet Davutoglu, last Saturday August 11st, where both parties decided to setup a bilateral team to prepare for the worst-case scenario and to “perform ‘intense analysis’ of all options [that] could be a precursor to more direct assistance.“[2] In addition, yesterday, the defected Syrian Prime Minister, Riad Hijab, has given a speech in Jordan where he called the military institution to defect from al-Assad, which could be a precursor to a pseudo-coup. Mr. Hijab was quoted to say, “I urge the army to follow the example of Egypt’s and Tunisia’s armies – take the side of the people.“[3]
The goals of the revolution, which are to bring down the regime and to clean Syria from the criminal mobs of al-Assad, must be protected. The rebels should not accept the defection of the military institution without guarantees. If the military is sincere, then the rebels should be allowed to keep their weapons until the transitional period is over, by which a just and public revolutionary court is immediately established and all of the military officers who were involved in the bloodshed are tried through this tribunal, especially those high-ranking officers that gave orders and forced soldiers to shoot at innocent civilians. If the army refuses such tribunal, then they fail the litmus test and it becomes clear that the military wants to protect the criminals that are still within its institutions and the rebels would ascertain that the revolution did not yet end!

Sinai, Israel and the Game of Nations

The Agency of the Assad Regime