It’s been a difficult couple of weeks for Russia’s war in Ukraine. Russia started its invasion of Ukraine back in February and everything that could go wrong went horribly wrong. The long convoy of trucks and tanks from Belarus to Kyiv ran out of petrol, the Ukrainians put up stiff resistance and all the assumptions of a quick and easy war went up in smoke in the first two weeks. Whilst Russia was able to readjust and get into a dominant position this came apart last week in the north-east of Ukraine. Ukrainian forces routed Russia’s forces in Kharkiv, forcing Russian forces to flee leaving behind significant military equipment. Vladimir Putin responded to the humiliating loss on Wednesday 22nd September by declaring a partial mobilisation that will call up 300,000 reservists and warned Western countries that Moscow will use nuclear weapons to defend its territory.

When Russia launched the invasion of Ukraine six months ago it believed it had overwhelming power to conquer Ukraine and believed the Ukrainian wouldn’t put up much resistance and Kyiv would fall within a week. So confident were the Russians, soldiers who entered Ukraine from Belarus to conquer the capital Kyiv, they took their parade uniforms with them. In order to ensure domestic public opinion in Russia didn’t turn against the war, Putin has from the beginning called the Ukraine operation a ‘special operation’ that aims to de-Nazify Ukraine. As a result, Putin didn’t call for a full mobilisation and believed a force of 100,000+ troops would be sufficient to pacify the country. But as the war raged on and as Russian troop deaths have increased Putin has come to rely on militia groups, veterans, Chechen brigades and Syrian militia groups to replenish troops. Last week this all caught up with Putin. 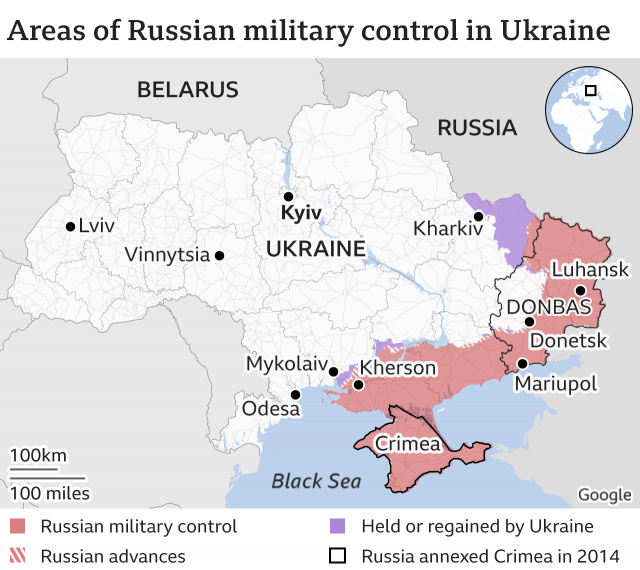 Ukrainian forces spent most of the summer announcing an impending operation in south Ukraine for the strategically important city of Kherson. Russian forces were moved from Kharkiv to supplement troops in the south of Ukraine. Russian troops were caught out with the main thrust of Ukraine’s offensive coming in the northeast, where its lightning strike saw Russian resistance collapse. What has been more worrying was how Ukrainian forces rolled through Russian lines of defences conducting one of the fastest advances since the opening weeks of the invasion. Capturing around 1000 square miles in just three days. Whilst Ukraine executed it’s offensive with skill it also succeeded because of Russian inadequacies. Throughout swathes of the Kharkiv region, Russian units were poorly organised and equipped – and many offered little resistance. Their failures, and their disorderly retreat to the east, has made the goal of President Vladimir Putin’s special military operation to take all of Luhansk and Donetsk regions considerably harder to attain.

Putin has responded to this tactical defeat by calling for a partial mobilisation, threatening the use of nuclear weapons and announcing referendums in annexed territories. The rotating of troops who have been fighting for over six months by itself won’t change the situation on the ground. This is because the 300,000 reservists are an insufficient increase in manpower to significantly alter the battlefield because Ukraine has mobilised around 600,000 personnel, with the possibility to move several thousand more, into military service. Russia has also suffered from logistical challenges – a problem that goes back in history. It’s very unlikely the new rotated troops can succeed where their fellow troops failed when Russia continues to suffer from a logistics problem.

Kremlin sources in June, July and August suggested the Kremlin intended to conduct annexation referendums on Ukrainian territories in mid-September, reports from early September suggested the Kremlin decided to delay the referendums until November or December in hopes of capturing more of the Donbas by then. But the Kremlin’s plan changed suddenly after Ukraine’s successful counterattack in the Kharkiv region. Putin is relying on the fact that annexing these territories to Russia will mean any attacks or deaths in these areas by Ukraine will be seen as an attack on Russia itself. The prospects of Russian reprisals, Putin hopes, will push the West to begin peace talks and reduce its weapons transfers to Ukraine.

The threat of using nuclear weapons is to show ultra-nationalists that Russia will do what it takes to conquer Ukraine. But there are some real-world practical limits to any use of nuclear weapons in Ukraine

The retreat of the Russian armed forces from Ukraine’s Kharkiv region sowed panic, disenchantment and bewilderment among pro-war activists. Their channels on the Telegram messaging app are brimming with anger at the authorities and questions about how such a setback came about. This is one of the most serious political challenges to the Kremlin and Putin has responded to this with nuclear rhetoric. The threat of using nuclear weapons is to show ultra-nationalists that Russia will do what it takes to conquer Ukraine. But there are some real-world practical limits to any use of nuclear weapons in Ukraine. Using a strategic nuclear warhead or a tactical nuclear weapon, in say eastern Ukraine would likely see the winds push the radioactive fallout into Russia, thus a large strategic nuclear strike could affect Russian territory even more. There is also the possibility the West might take a Russian strike on Ukraine as a potential threat to themselves, triggering an exchange. Russia wants to conquer Ukraine to achieve strategic depth and radioactive Ukraine will not achieve that for the Russians.

The mobilisation of new troops and at the level announced would suggest Russia’s measures are instead intended to hold the territory it currently occupies rather than seize significantly more. The amount therefore will not give Russia a manpower advantage, but it will likely be sufficient to deny Ukraine the advantage it needs to successfully conduct surprise and major counterattacks similar to that seen in Kharkiv. Russia now faces the same challenge the US faced in both Iraq and Afghanistan: the initial invasion was based on assumptions that have proven to be completely wrong and there are no clear cut new options for success and therefore the longer the war goes on the more it will drain resources, cash and impact the economy. This in turn will lead to the general public turning against the war. The strategy used by Putin of having a small number of troops go to war is now causing the very problem Putin was trying to avoid.

PODCAST: Iranian Rage Against the Regime