Contrary to the opinion of the US intelligence community, Hypersonic weapon systems bring back equilibrium to an unstable world

In a case more akin to a Sherlock Holmes novel the case of the missing rocket launch was solved with a surprising conclusion. There was an announced launch on 19th July 2021 of a Long March 2C rocket which constituted the 77th launch of this particular rocket. Subsequently on 24th August 2021 there was an announced launch of another Long March 2C rocket which was officially stated as the 79th launch.[1] This left many seasoned observers of the Chinese space program wondering what happened to the 78th launch. Although the launch of a rocket is difficult to conceal, the oversight in numbering detracts from the major issue at play here.

Unlike Russia, their more bombastic strategic competitor, both China and the US are fairly coy about their development of Hypersonic weapons, with little information available in the public domain analysts and interested observers search for snippets in academic journals and launch logs.

Whether feigned or genuine, the US displayed a great deal of surprise and consternation at this launch and despite its own astronomical defence budget reiterated its opposition to Chinese militarism.  The Chinese on the other hand initially denied any such launch had taken place but Zhao Lijian the foreign ministry spokesman, later stated that the launch was a routine test of a space vehicle to verify technology for reusable space vehicles.[2]

Individuals familiar with the launch said that the test consisted of a combination of different systems working together to produce a system with the capability to evade US Missile defences. A conventional rocket placed what is known as a fractional orbital bombardment system into low earth orbit which orbited the earth twice before releasing a hypersonic glide vehicle which delivered its payload to a predesignated target.

Fractional Orbital Bombardment systems (FOBS) were initially developed by the Soviet Union and were designed to offer several advantages over early ICBMs. FOBS effectively offered unlimited range as the payload was placed in orbit rather than on a parabolic trajectory, it could evade US early warning systems which were mainly north facing and the launch vehicle and or site would not be connected to the missile by a parabolic trajectory  making counter strikes more difficult.

Although as a concept hypersonic glide vehicles are nothing new, the decades-old space shuttle in essence constitutes such a system.  It’s weaponisation, however is unique and signifies a paradigm shift in weapons developments. Ballistic missiles, although traveling much faster, have predictable trajectories from launch to impact making interception relatively easy. But hypersonic glide vehicles follow pre-programed and unpredictable flight paths making interception significantly harder. 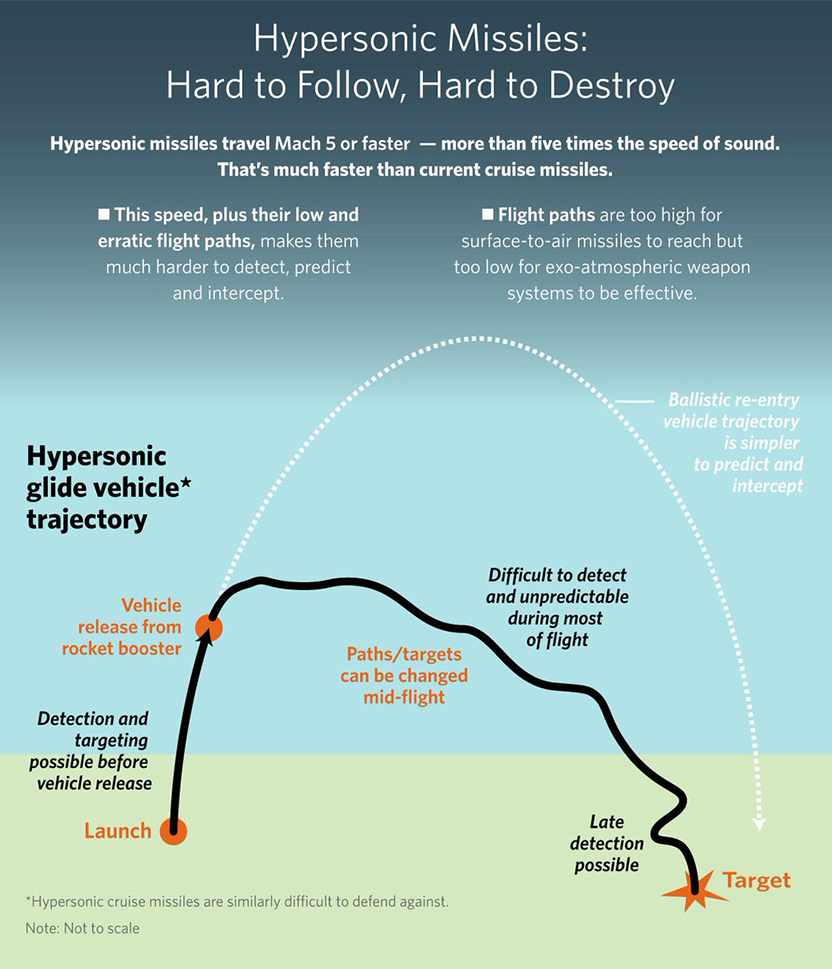 Hypersonic flight poses immense challenges to airframes and engines especially leading edges and air frame skins which can reach temperatures far beyond the endurance of current materials. When China announced in late 2019 that it had developed new materials for possible use in hypersonic vehicles, western  commentators  assumed it was simply bravado and bluster. But contrary to expert opinion, China has indeed made noteworthy  progress in deploying a working system.

The hypersonic glide vehicle purportedly missed its target by a few dozen miles, indicating that an inertial guidance system rather than GPS was used for course correction. This indicates that intractable guidance issues which hinder all competitor hypersonic programs, have not been solved by China. Hence a working system is still some distance away.

Many independent experts however urge caution. The US military industrial complex with its proponents in politics and the media have been known to overstate the risk posed by Russian and now Chinese strategic weapons.[3]  Many of the advantages offered by hypersonic glide vehicles are tempered by their relatively slow speeds compared to ICBMS, and multiple independent reentry vehicles with terminal maneuvering capabilities offering most of the benefits that glide vehicles offer.[4]  The benefits of their development and deployment are hardly justified by the cost.

Risk assessments and cost benefit analysis aside, the world has indeed moved on. The US no longer enjoys a technological superiority over its foes,[5] and the unilateral scrapping of the anti-ballistic missile treaty (ABM) will precipitate unintended consequences. The treaty ensured that in the event of an escalation to nuclear weapons by either the US or the USSR lacking anti-ballistic missile defences neither side would emerge unscathed.

But this particular cloud does have a silver lining: contrary to the opinion of the US intelligence community, these systems conversely bring back equilibrium to an unstable world. They maintain the deterrence that mutually assured destruction offers and focus minds on averting war rather than prosecuting it.