President Biden and the leaders of Australia and the UK announced a new military agreement on Wednesday 16 September. The pact, known as AUKUS, is aimed at countering China. It will focus on the sharing of sensitive military technologies with the first initiative focusing  on manufacturing  Australian nuclear-powered submarines. US officials speaking to CNN described the effort to share nuclear propulsion with another country as an “exceedingly rare step” due to the sensitivity of the technology. “This technology is extremely sensitive. This is, frankly, an exception to our policy in many respects,” one unnamed official said.[1]

The presence of submarines in naval theatres of operation significantly constrain an adversary’s freedom of choices when engaging in naval operations.  The probable presence of an undetected foe, with the ability to destroy or disable one’s capital vessels, forces naval commanders to adopt a more conservative approach to naval warfare especially in littoral waters where submarines are significantly harder to detect.

There have been three major paradigm shifts in development of naval warfare with a fourth now appearing upon the horizon. The first was the development of large capacity, Steam powered ships carrying cannon which led to the rapid expansion and modernisation of European navies. Subsequently Submarines were then developed during the American civil war but due to technological constraints proved ineffective.

The development of the internal combustion engine and powerful lead acid batteries in the late 19th century spurred the development of militarily effective submarines and  by the end of World War I they had proven to be a militarily significant arm of naval warfare.

Submarines proved their worth  during World War II, the German Navy’s fleet of U-boats although technologically deficient almost starved the British Empire into submission and inflicted tremendous losses on US coastal shipping. It was only the development of the cavity magnetron and sea surveillance radar that staved off a complete UK capitulation.

Unlike previous iterations modern Submarines are capable of operating completely submerged, they are designed around a pressure hull which is a sealed metal vessel  strong enough to withstand water depths of around 100 meters with nuclear submarines generally capable of descending to around 300 meters. Submarines have ballast tanks that are filled and emptied to lower and raise the sub whilst under water.

The two main categories of submarines are attack and ballistic missile submarines. Attack submarines come in either diesel electric or nuclear forms whilst the latter due to the necessity to remain submerged until they are required are exclusively nuclear.

Although many nations have the ability to manufacture a diesel electric submarine, the manufacture of its nuclear sister is considered one of the most complex engineering tasks accomplished by developed nations. The ability to miniaturize a nuclear reactor with the capability to power a small town together with its power generating equipment has only been accomplished by a select group of nations as the requisite skill and experience are difficult and expensive to develop and that’s why this exclusive club is restricted US, Russia, UK, France and China 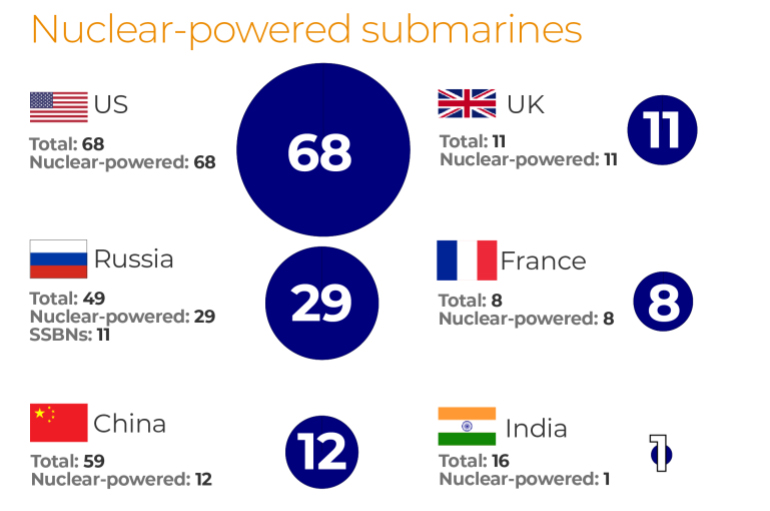 The US, Russia and China maintain the largest stock of submarines, but presently around 43 countries operate around 600 submarines. Diesel electric submarines combust diesel fuel to charge batteries which are used to power ancillary equipment.  The necessity of oxygen for combustion hampers the operational ability of these vessels, batteries are normally exhausted after 8 hours and snorkels are easy to detect. Nuclear submarines are only constrained by the exhaustion of their food supply but with the development of Air Independent Propulsion (AIP) systems which have the capacity to run silently underwater for several weeks.[3] The ability of conventional submarines to wage war is significantly increased and at a fraction of the cost of a nuclear submarine.

Submarines use both active and passive sonar (SOund NAvigation and Ranging) to detect enemy vessels.  Sonar consists of an array of  powerful microphones used to detect enemy submarines and vessels. Similar to radar, Active sonar broadcasts a signal (a sound) and listens for the signal to reflect off of objects. Whilst passive sonar relies on detecting the sounds emissions from enemy vessels. Sonar systems are also extremely expensive and complex systems, requiring powerful signal processing to differentiate useful signals from clutter.

The world’s oceans constitute the primary means of raw material and manufactured goods supply routes and mastery of the oceans is essential to protect china’s  interests from the Taiwanese to the Malacca straits china is surrounded by choke points, which potential adversaries may use to their advantage.