The peace deal over the Nagorno-Karabakh enclave is a major victory for Azerbaijan and its supporters. The outcome now places not just Armenia but the Russian strategic position on the back foot in the Caucuses.

Several thousand protesters defied martial law on November 12 to gather in central Yerevan, the Armenian Capital, demanding the resignation of Armenian Prime Minister Nikol Pashinian for “traitorous actions” in signing a Russian brokered ceasefire deal. This brought an end to the six-week Nagorno-Karabakh war that has seen Armenia cede territory to Azerbaijan. The victory in the Nagorno-Karabakh is a major victory for Azerbaijan and Turkey who played a major role in the Azeri victory. Russia and Armenia were forced to concede as Azheri troops with Turkish weapons closed in on the enclave’s key areas. This now places not just Armenia but the Russian strategic position on the back foot in the Caucuses.

This is a stunning reversal of fortunes for Armenia, who with Russian help, occupied most of the enclave and its surrounding areas for the last three decades. Azerbaijan has been to war with Armenia twice previously and lost. But on this occasion the Azeris prevailed gaining a stunning victory over their staunch rival. The Azeris with Turkish military help and guidance utilised conventional tactics assembling a small coalition of ground forces to neutralise the Armenian positions from different flanks and forcing them to constantly retreat. The Azeris also utilised rapid-tempo operations by small groups of specialized teams of commandos, who went on search and destroy missions. This was a huge departure from previous wars where the Azeris utilised lightening strike missions to catch the enemy off guard. These tactics, on this occasion proved to be extremely useful for the Azeris against the Armenians. The Jamestown foundation highlighted: “Azerbaijan adopted a new war strategy: instead of a traditional blitzkrieg, its forces have relied on intensive and accurate artillery strikes targeting Armenian fortified defense lines. This approach reduces human casualties and overcomes the vulnerability of extended supply lines.” The extensive training, equipment and tactics from Turkey proved to be the difference, on this occasion, for the Azeris. 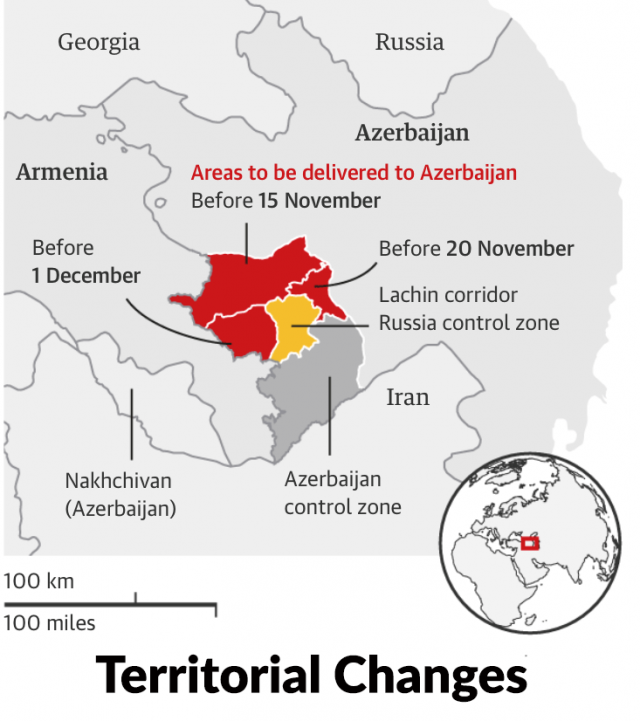 Moreover, the military capability of the Azeris was simply more superior. Due to Azerbaijan’s oil profits it has been able to purchase numerous Western military platforms. This includes radar-jamming systems from Spain, self-propelled DANA howitzer artillery from the Czech Republic and very recently, Turkish-made Bayraktar drones. Can Kasapoglu from the Azeri Times explained Azerbaijan’s military planning and operations “mimicked the Turkish Armed Forces’ way of warfighting during Operation Spring Shield.” Whilst Fuad Shahbazov, of the Baku-based Center For Strategic Communications, explained: “The Bayraktar drones carry four missiles that are also produced by Turkey — MAM laser-guided ‘smart micro munition’ missiles. These drones have been used in Libya and Syria where they’ve proved to be very effective against all Russian-made weapons. In Syria, these drones very easily destroyed Russian air defense systems like the S-300 and S-400 surface-to-air missiles (SAMs).”

The training and support from Turkey proved invaluable for Azerbaijan as it allowed it to utilise tactics in order to achieve the objective of regaining the strategic enclave of Nagorno-Karabakh. More importantly, Russia’s defense system, the S-400 (the Russian jewel) has been exposed by Turkish military drone attacks in Syria and now in the Caucuses. The Armenians stood little  chance against the Azeris in terms of technological military edge as most of their weapons are Russian made, with a considerable quantity of the arsenal from the Soviet era. This left Russia exposed as it was unable to quickly increase support to the Armenian forces in the enclave and thwart the pressure from Azerbaijan. Russia as a result turned to brokering a ceasefire deal and imposed this upon the Armenian Prime Minister Nikol Pashinyan, who called the deal “incredibly painful both for me and both for our people.” Instead, Russia ensured its peacekeepers will resource 16 observational posts in the region after Armenian withdrawals are complete.

Nagorno-Karabakh is a mountainous enclave which Azerbaijan lost to ethnic Armenians back in 1994. This victory now reverses much of this and is seen as correcting a historical wrong for the Azeris. The Nagorno-Karabakh conflict disrupted Azerbaijan’s oil flows from Baku to the international markets and capturing this region from Armenia finally brings an end to the painful geopolitical chapter.

Nagorno-Karabakh and its surrounding areas retain much strategic value. Armenia backed the separatist government when the Soviet Union was collapsing in 1991 as they were ethnic Armenians. But Armenia never had the capability to support the ethnic Armenians there. As Russia began to secure its former republics when Vladamir Putin emerged as leader in 1999 Russia supplied the Armenaians with diplomatic, economic and military help in order to safeguard Russian interests. For Russia this area became even more important as Azerbaijan received recognition and support from the West who were also looking to gain influence within the former Soviet territory.

There are a number of ramifications both for the regional and international powers with this new geopolitical development.

Firstly, for Azerbaijan this victory gives it the strategic space to secure its oil profits from the Caspian Sea since there would be no more conflict spilling from the enclave into the narrow 60 mile choke point called the “Ganja gap.” 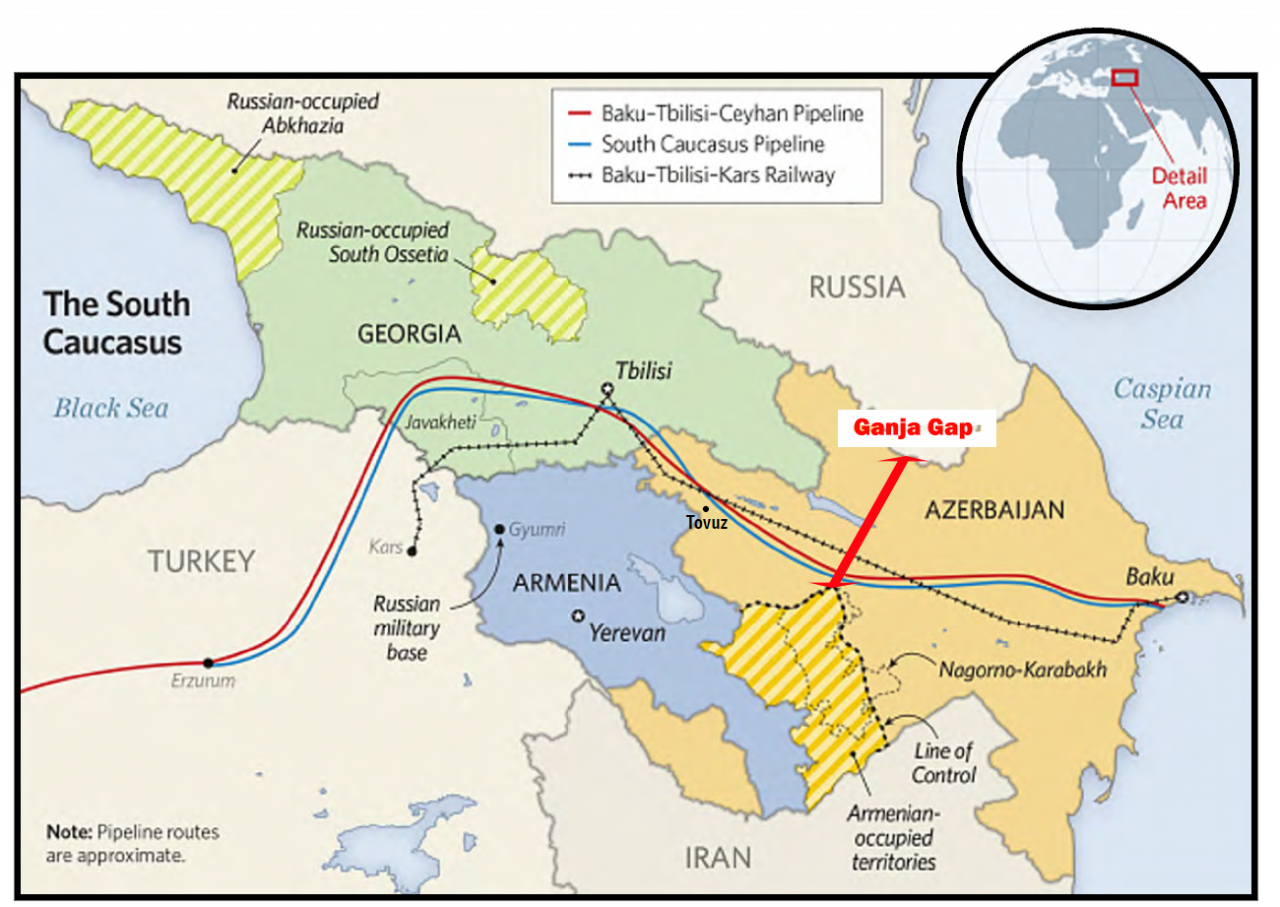 Secondly, for Turkey this victory helped it to increase it neo-ottoman footprint and now becomes the latest international issue Turkey has played a central role in resolving.  After the Azeris triumph Turkey can increase its commitment and influence over the Baku-Tbilisi-Ceyhan pipeline.

Thirdly, this is a major victory for Europe who has for long been looking to reduce its dependency on Russian energy. With the Azeri victory, energy from Caspian can now easily flow to European markets without disruptions.

Fourthly, for Russia, the whole debacle is a major setback since it would reduce its monopoly of energy towards Europe. It also means, due to Azerbaijan’s victory, western interference will increase in the region which has long been the US strategy since the collapse of the Soviet Union. The Armenian public reacted with dismay at the ceasefire deal calling the Prime Minister a traitor for agreeing to such an agreement. It is very likely the US will  try to exploit the fragile political situation in Armenia and try to weaken Russia’s control over Armenia.

Fifthly, for Iran the Azeri victory spells trouble as the Azeri separatist groups in Northern Iran can now be exploited by mainland Azerbaijan. Northern Iran is a geopolitical breaking point for the Iranian regime. For years the Iranians supported the Armenian position in the Nagorno-Karabakh whenever it saw the opportunity to do so. The Azeri victory creates a major problem for the Clerical regime now.

Sixthly, the US may have remained relatively silent during the duration of the conflict, but she has long been strategically involved in the Caucasus. The US supported Azerbaijan in the late 1990s when the neoconservatives came to office, President George W Bush waived Section 907, which banned direct aid from the US government to Azerbaijan to facilitate economic and political stability. This was at the behest of the US Armenian lobby in the 1990s. The Obama administration also waived the Act, and it still remains waived today. The episode in the Caucasus also reveals the strategic relationship between Turkey and the US. Despite US threats of sanctions on Turkey, the US did not criticise Turkey’s actions in the Nagorno-Karabakh. A similar scenario played out in both Syria and recently Libya where both nations have been on the same page strategically, despite their differences over less strategic issues.

The Nagorno-Karabakh conflict has now firmly moved in the direction of Azerbaijan and this now opens the door to Turkish, US and Western meddling in the important Caucasus region. Russia now faces serious problems in its periphery and the Nagorno-Karabakh is just the latest setback. In Belarus the Russian backed political system is fighting for its life as the October 2020 election result is being disputed and demonstrations continue two months since the election. In Kyrgyzstan the October Presidential election saw the state lose control of the country for a short period as people took to the streets due to the electoral result. In Georgia the November election result is being contested, all of this now means Russia’s periphery is under siege. This shows that the issue of Nagorno-Karabakh is related to American-Russian rivalry and it also illustrates Mackinder’s maxim of dominating the heartland is still alive within the policy circles of the US, which they continue to pursue for pre-eminence in Eurasia.

Mapped: The Top Export in Every Country