The shadow war between Israel and Iran takes place from the mountains of Lebanon, to the jungles in Latin America, from the edge of Europe to the deserts of Africa, sometimes it spills out into the public view. Iran has come to represent the most strategic threat to Israel’s survival.

The Israeli and Iranian rivalry is one of the defining features of the Middle East. Israel views Iran as a hostile regional actor, a state sponsor of terrorism who wishes to wipe Israel off the map. For Iran, Israel is an artificial creation who is looking to expand its influence and borders in the region and must be stopped. The battleground between both nations is global, from the mountains of Lebanon, to the jungles in Latin America, from the edges of Europe to the deserts of Africa, the shadow war between both nations sometimes spills out into the public view. As both nations have regional agendas that are incompatible with each other. Iran has come to represent the most strategic threat to Israel’s survival.

It may be shocking to many, but Israel and Iran were once allies, who collaborated with each other in the region. Tehran is well over a thousand miles from Tel Aviv. The two countries do not border each other. There were no bilateral claims toward one another. As a result, the two countries were united in their fears of Nasserite pan-Arabism and Soviet influence in the Middle East. Israel viewed Iran as an important part of its periphery doctrine, which was meant to offset Arab states through military, intelligence, and economic cooperation with such non-Arab states as Iran. The Shah saw Israel as a useful counterweight to the Arab world and also believed that Israel’s influence in Washington would benefit Iran as an aspiring great power. Various types of diplomatic, military and trade ties endured for some three decades; Iran was an important source of oil for Israel when none of the other oil-rich states in the region would export oil to her. During the 1960s and 1970s, Israel had many contractors and military advisers’ resident in Tehran, a Hebrew-language school was opened there for Israeli children and El Al operated regular flights between Tel Aviv and Tehran. The Mossad and the SAVAK, Israel’s and Iran’s intelligence organisations, joined forces in aiding the Kurds in their struggle against the Iraqi regime and in 1977 both even cooperated on “Project Flower,” a joint plan to develop a missile that could carry a nuclear warhead.

Non-Arab countries such as Iran, Turkey and Ethiopia shared a common fear of Nasser’s Pan-Arabism and Soviet influence, facilitating the emergence of the periphery alliance. Iran was the “jewel in the crown of the alliance of the periphery”.[1] But this all changed in 1979 when the Shah was overthrown, and the clerics took power in Iran. The new revolutionary regime immediately severed diplomatic ties with Israel, turning over the Israeli Embassy to the Palestine Liberation Organization (PLO). Iraq’s 1980 invasion of Iran delayed the fraying of relations as Iran’s desperate military, decimated by purges and the loss of Western military assistance, forced the regime to turn to Israel for crucial supplies. Weapons, munitions, aircraft spare parts and combat engineering equipment were transferred to Iran in an extensive covert operation that later meshed with the Iran-Contra conspiracy. But it was becoming clear to Israel that weapons sales were not going to renew the Israeli-Iranian alliance.

In the 1990s as Iran moved forward with its missile and nuclear programs Israeli woke up to the Iranian threat. When the clerical regime began offering military support and training in order to expand its influence in the region this further elevated the Iranian threat in Israeli strategic analyses. Israeli leaders no longer viewed the broader peace process as a central component to curbing Iranian influence; they now believed that curbing Iranian regional influence would be key to resolving Israel’s dispute with its Arab neighbours. Iran’s continued pursuit of nuclear capabilities only further fuelled the threat perceptions of Iran as Israel’s most dangerous regional opponent. Israel’s strategy against its biggest enemy came to be the need to cripple its capabilities short of a full-scale war.

The clerical regime when it took power in 1979 carried out an extensive purge of the former Shah regime and those it saw as a threat. Due to this many dissidents left Iran and were given asylum by the US, Iraq and Israel. Israel saw these anti-regime rebels as tools that could be used to create instability in Iran for the clerical regime. US officials have confirmed that the Mujahideen-e-Khalq (MEK) was financed, trained, and armed by Israel.[2] The MEK fell foul of the clerical regime and was able to gain training in the US and Israeli funding for their operations against the Iranian government.[3] Jundallah, another anti-regime group that operated in the province of Sistan-Balochistan of Iran and engaged in numerous attacks resulting in the death and maiming of scores of Iranian civilians and government officials. Israel’s Mossad recruited members of Jundallah group to fight against Tehran.[4]

Israel has utilised assassinations against key individuals such as senior IRGC commanders and those involved in Iran’s nuclear programme. From 2010 Israel began carrying out assassinations.  Particle physicist Masoud Alimohammadi was assassinated in 2010 when a booby-trapped motorcycle parked near his car exploded. In November 2010, two senior Iranian nuclear scientists, Majid Shahriari and Fereydoon Abbasi, were targeted by hitmen on motorcycles, who attached bombs to their cars and detonated them from a distance. Shahriari was killed, while Abbasi was severely wounded. On 11 January 2012, the deputy of the Natanz nuclear power plant, Mostafa Ahmadi Roshan and his driver were killed by a bomb attached to their car from a motorcycle. Israel has regularly targeted Iranian revolutionary Guard Corps (IRGC) commanders. On 12 October 2010, an explosion occurred at an IRGC military base near the city of Khorramabad, killing 18 soldiers. Israel has neither confirmed nor denied its involvement in such assassinations, but Israeli defence minister Moshe Ya’alon said: “We will act in any way and are not willing to tolerate a nuclear-armed Iran. We prefer that this be done by means of sanctions, but in the end, Israel should be able to defend itself.”[5]

Israel also engaged in cyber warfare to halt Iran’s nuclear programme. In 2010 Stuxnet, an advanced computer worm was discovered. It is believed that it had been developed by the US and Israel to attack Iran’s nuclear facilities. In a study conducted by Institute for Science and International Security it is estimated that Stuxnet might have damaged as many as 1,000 centrifuges (10% of all installed) in the Natanz enrichment plant. Other computer viruses and malware, including Duqu and Flame, were reportedly related to Stuxnet. Iran claims that its adversaries regularly engineer sales of faulty equipment and attacks by computer viruses to sabotage its nuclear program.

Israel carried out a widespread wave of air strikes on Iranian targets across Syria as the uprising was in full swing. The strikes regularly targeted Iranian and Hezbollah weapons sites. They included development, storage, and transfer facilities, some of which appear to have been embedded in Syrian regime military bases. Targets around Damascus, Homs, and western Syria were all also hit, resulting in a number of casualties. Using advanced intelligence coupled with precision firepower, Israel prioritised the objective of disrupting the construction of an Iranian war machine in Syria. Israel also acted on many occasions to prevent Iran from using Syria as a transit and production zone for advanced weapons, such as guided missiles, for the benefit of Hezbollah in Lebanon.

Israel has pushed for a military strike against Iranian nuclear facilities. Since 2010 it aggressively pushed for strikes, but has been unable to see this through. This is because a successful Israeli strike would require up to 1,000 flights by military aircraft, which is a high number and alone would stress the capabilities of Israel’s air force. Any attack on Iran would require a surprise attack (not the very public statements constantly coming from Tel Aviv), cover a large area and circumvent Iranian reprisals. An Israeli airstrike on the Iranian nuclear program would be a complicated and an operationally demanding task, a strike package of fighter-bombers and associated support aircraft would be needed to carry out most of the attack.

The most formidable challenge is how Israel would get to Iranian territory with enough fire power. A successful Israeli attack would require up to 1000 sorties, which would need over 100 military aircraft. That high number alone would stress the capabilities of Israel’s air force. Alongside this Israel’s military would face several logistical problems; the Israeli military would need to locate Iran’s nuclear facilities, which have been spread out all over the country. Iran’s nuclear complex is large, carefully concealed, and spread extensively throughout the country, with multiple pathways. Several nuclear sites are believed to be buried deep underground, making them hard to spot. 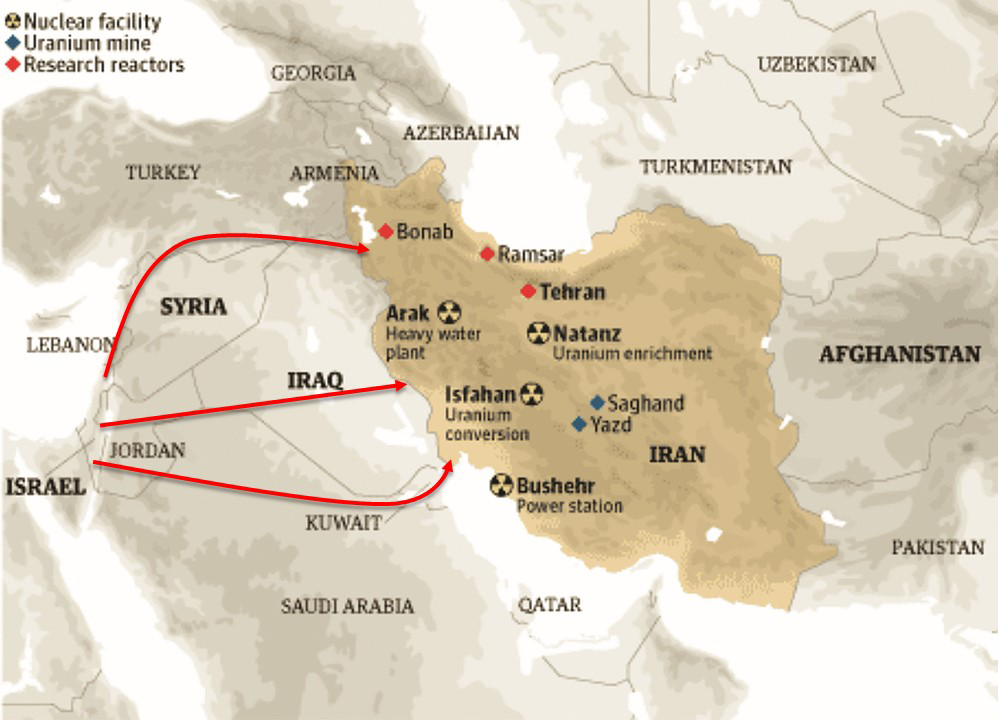 Iran is around 1000 miles from Israel, each jet would have a 2000 mile round trip. Israel’s 300  combat-capable aircraft would need aerial refuelling to make it home. Fuel use will be affected by altitude, speed and payload, to effectively strike Iran’s nuclear facilities each jet would need large payloads to make a difference, which means more fuel use, more demand on aerial refuelling assets. Israel’s 13 air refuelling tankers would need to service aircraft flying vast distances and it’s not clear they are all in operation. These would not be enough for the 100 plus fighter jets making trips of 2000 miles. Israel will also need the participation of numerous Muslim rulers as it does not share a border with Iran. It could go north from Israel, along the Syria-Turkey border. It could fly over Jordan and Iraq – the more direct route, or it can go south and fly over Northern Saudi Arabia. Without the active participation of the rulers in these countries, Israel will not be able to traverse the airspace of these countries.

Israel’s military capability is not strong enough to completely end Iran’s nuclear programme through an airstrike. This is why it will need US participation in any strikes. For Israel, the image that it will and can launch an attack achieves a propaganda goal though in practice it lacks the capabilities and utilises more asymmetric tactics to deal with its arch enemy. Many Israeli analysts argue that Israel would not likely attack Iran without US support no matter what the United States was doing on other fronts because Israel knows that on its own it cannot do more than postpone Iran’s program. Indeed, although Israel has defied US preferences numerous times on other policy issues such as settlement activity, it would be far more difficult politically and operationally to launch a military attack on Iran without US knowledge and assistance.[6]

Israel has spent seven decades dealing with strategic threats on its borders, but its greatest threat has turned out to be a nation who shares no borders with it and is over 1000 miles away. This distance represents the biggest challenge for Israel, and this is why the war between Israel and Iran takes place in the shadows, so it doesn’t spill out into a full blown war, something both Iran and Israel don’t want. Despite Israel’s numerous strategic dilemmas, for the moment the normalisation strategy with the Arab nations is something that will not work with Iran.

From Inconvenient Partners to Frenemies

The Geopolitics of China