By Adnan Khan There was never any doubt who would win this week’s Egyptian presidential election. After the regime arrested, silenced or assaulted all potential opponents, including the former army chief of staff, Sami Anan, it was clear the incumbent was going to win the Egyptian presidential election by hook or by crook [1]. After his coup back in 2013 Abdel Fatteh al-Sisi promised Egyptians that their nation would become “larger than the world itself”....
29th March 20184 min 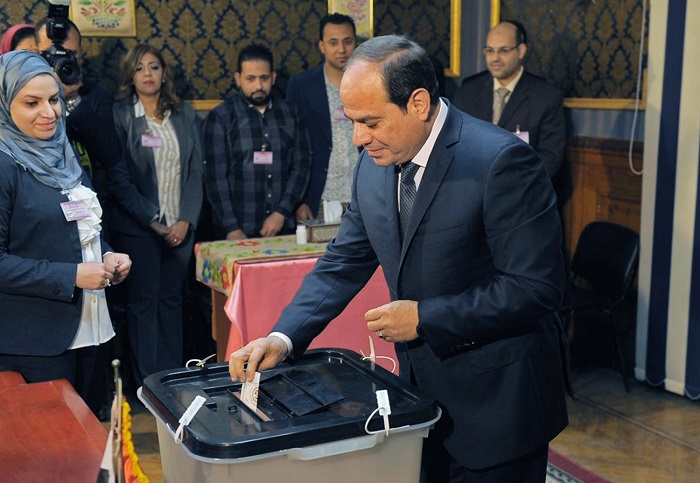 There was never any doubt who would win this week’s Egyptian presidential election. After the regime arrested, silenced or assaulted all potential opponents, including the former army chief of staff, Sami Anan, it was clear the incumbent was going to win the Egyptian presidential election by hook or by crook [1]. After his coup back in 2013 Abdel Fatteh al-Sisi promised Egyptians that their nation would become “larger than the world itself”. After becoming President in 2014, Sisi promised economic revival and the improvement of the nation’s education system and infrastructure. But despite the electoral result Sisi has failed on all counts.

During his four years as President, Sisi has cracked down on everyone under the guise of terrorism or being members of the Muslim Brotherhood (MB). This was in order to bring the country’s political system squarely under his grip. In the same month back in June 2013, when Sisi undertook a coup against the MB government, the Egyptian army — at Sisi’s direction — killed almost 1,000 pro-Morsi protesters in one day, in what became known as the Rabaa Massacre [2]. Sisi presented himself as a steady hand in the midst of all the chaos. As security forces cracked down on all areas of public life in Egypt, he imposed military law. Sisi has used his presidency to crack down on all dissent and political opposition. In its annual 2017 report, Human Rights Watch wrote that Sisi’s government has ‘maintained its zero tolerance policy toward dissent’ [3]. Alongside this, Egypt’s National Security Agency has engaged in systematic, widespread torture and extrajudicial killings. Thousands of civilians, including children, have been tried in military courts. The Sisi government, Human Rights Watch highlighted, was operating with ‘near-absolute impunity for abuses by security forces under the pretext of fighting terrorism’ [4].

[perfectpullquote align=”full” cite=”” link=”” color=”” class=”” size=””]Sisi promised economic revival and the improvement of the nation’s education system and infrastructure. But today he has failed on all counts[/perfectpullquote]

Sisi’s violent and military methods all stem from his utter failure with the economy. After the 2011 uprising and increase in terror attacks, Egypt’s tourism industry, which was a major source of revenue for the country, took a nosedive. In November 2016, the Egyptian government took emergency measures to avoid bankruptcy and enacted harsh economic reforms to receive a $12 billion loan from the International Monetary Fund; they cut subsidies, and inflation skyrocketed. Food prices rose by 30% [5]. Zeinab Abul-Magd, a history professor at Oberlin College who focuses on Egypt’s economy, highlighted: “Sisi’s popularity has tremendously decreased because of incompetent economic policies” [6]. Moreover, Sisi’s much publicised Suez Canal project – which went ahead without a public feasibility study and against the advice of economists – has failed to generate anything close to the revenue increase Sisi promised. Unemployment has been Sisi’s biggest failure, especially youth unemployment. This was one of the key factors that led to the ‘Arab Spring’ uprisings and it still remains very high. Almost 80% of people without jobs are young people. A 2016 Brookings report argued that if the Egyptian government does not deal with youth unemployment soon “it will likely face instability — and perhaps another uprising — in the years to come” [7].

The crisis in the Sinai has also exposed his macho man image and undermined brand Sisi. The Sinai Peninsula is home to several Bedouin tribes and has historically been neglected and as a result poverty is rife there. Since Mubarak’s era, the region was comparatively lawless but the bad situation there became exponentially worse when Sisi rose to power in 2013. There were waves of attacks carried out from North Sinai in 2014 and 2015 on security directorates in Cairo, and an assassination attempt on the Interior Minister. In December 2016, a suicide bombing at a Coptic church left 25 people dead. Last November, militants struck a Sufi mosque in the region, killing 305 people. The attackers used automatic machine guns and explosives, and 27 children were among the dead. Sisi has responded to the Sinai attacks by increasing the numbers of troops, arrests, and executions, but as attacks have increased, his methods haven’t worked. One of the problems is the Egyptian army is using traditional military methods to fight a highly mobile and adaptable guerrilla force.

Sisi’s popularity has declined due to a mix of severe austerity measures, repressive tactics, and an unpopular decision to cede two islands under Egyptian control to Saudi Arabia [8]. His expensive and prolonged anti-terror campaign in the Sinai is also failing. The mass arrests and the exploding hegemony of state institutions reveals a weak hand by Sisi. He is today an unbridled despot ruling over the most important country in the region, his oppression merely conceals how weak Sisi’s real position is. Hosni Mubarak was in power for nearly 30 years and never saw the uprising coming. Sisi in all likelihood will survive a mere fraction of that time.

The Slow Death of the Nation State

After Seven Years: What Has Gone Wrong in Syria?