All the research in the last few decades accepted that the world was facing a severe population explosion. Uncontrolled population growth would outstrip scarce resources and devastate the environment. More people would require more resources in the form of food and energy, which in turn would lead to a rise in global warming and other ecological catastrophes. There was no disagreement on the basic premise that population was growing. But in the 21st century growth...
23rd July 20166 min

All the research in the last few decades accepted that the world was facing a severe population explosion. Uncontrolled population growth would outstrip scarce resources and devastate the environment. More people would require more resources in the form of food and energy, which in turn would lead to a rise in global warming and other ecological catastrophes. There was no disagreement on the basic premise that population was growing. But in the 21st century growth rates are not accelerating but falling

Modern research on the genetic structure of human population suggests that nearly 15,000 years ago the world population was 15 million (the present population of Delhi, India). The population by the time of Isa (عليه السلام) over 2000 years ago had increased to 250 million (about the same as present day Indonesia). On the eve of the industrial revolution in the 18th century world population had tripled to about 700 million (double the size of present day America). In the two centuries that followed the global population increased at an annual rate of 6% reaching 2.5 billion by 1950. Between 1950 and 2000, global population doubled, from three billion to six billion. 71 million people were added annually between this period. Not only has the population of the world been growing, but the growth rate has been accelerating at a colossal rate. In the first 15 years of the 21st century the world’s population reached 7.3 billion. 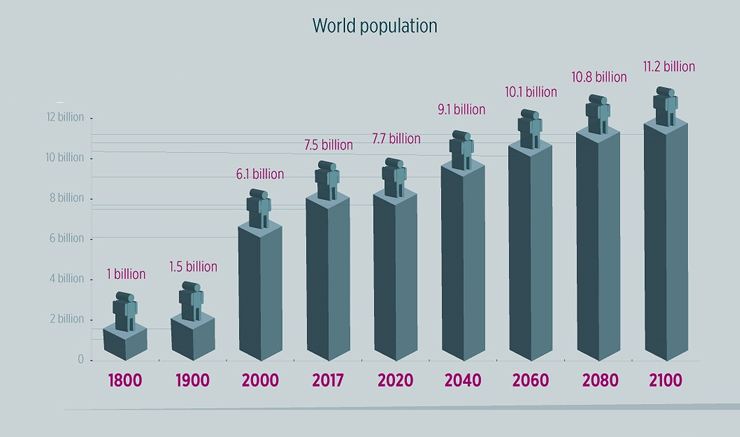 But in the 21st century growth rates are not accelerating but falling. According to the UN, between 2000 and 2050 the population will continue to grow, but only by about 50%, halving the growth rate of the previous fifty years. In the second half of the century, growth rates are anything between 0-10%. The annual increase in world population is expected to be 57 million a year on average between 2000 and 2050. This is smaller than the 71 million people added annually between 1950 and 2000. So at some point in the 21st century or soon after the colossal growth rates seen in global population will cease to exist.

We already see change taking place in the first world or developed nations. The declining birth rates have led to fewer younger workers to support the vast increase in pensioners. Europe and Japan are experiencing this problem already. Many also assumed population growth might be slowing down in Europe, but the world’s total population will continue to grow because of high birth rates in the third world. But birth rates are plunging everywhere. The first world nations are on the cutting edge of the decline, but the rest of the world is following right behind them. And this demographic shift will help shape the remainder of the 21st century.

Some of the world’s powers, like Germany and Russia, are going to lose large percentages of their population. Europe’s population today, is 742 million people. The UN forecasts that by 2050 it will drop to somewhere between 557 and 653 million. The lower number assumes that women will average 1.6 children each. The second number assumes 2.1 children. In Europe today, the fertility rate per woman is 1.4 children.

The critical number for fertility is 2.1 births per woman. This is the number of children that each woman must have, on average, in order to maintain a generally stable world population. Anything above that number and the population grows; anything below, the population declines. According to the UN, women had an average of 4.5 children in 1970. In 2000, that number had dropped to 2.7 children. This is a dramatic drop. The UN forecasts that in 2050, the global fertility rate will decline to an average of 2.05 births per woman. That is just below the 2.1 needed for a stable world population. The UN has another forecast, based on different assumptions, where the rate is 1.6 babies per woman. So the UN, which has the best data available, is predicting that by the year 2050, population growth will be either stable or declining dramatically.

The developed nations of the world consist of 44 countries. In these countries women currently have an average of 1.6 babies each, which means that populations are already decreasing. Birth rates in the middle tier of countries such as Mexico or Turkey are down to 2.9 and falling. Even the least developed countries are down from 6.6 children per mother to 5.0 today, and expected to drop to 3.0 by 2050. In the poorest countries, such as Bangladesh or Bolivia, the birth rate is also falling, but it will take most of this century to reach 2.1 births per women. There is no doubt that birth rates are plunging. The stunning collapse in fertility rates across the world is the biggest and least reported demographic story of the past few decades. The developed world is no stranger to falling fertility. With the exception of the postwar baby boom, birth rates have been in almost uninterrupted decline for more than a century. More recently, however, fertility has also declined throughout the developing world and at an extremely rapid pace. Iran, a country that evokes images of traditional family values, has undergone one of the fastest fertility declines on record. According to UN estimates, the average number of children born to each Iranian woman has fallen from 6.6 to 2.1 over the past 25 years.

The population of each nation affects all aspects of national life. A lower population affects everything from the number of troops that can fight in a war to how many people there are in the workforce. The population of a nation affects how people live, and therefore how those countries behave. Even the US has a birth rate for white women of around 1.9, meaning that the Caucasian population is contracting, but the African-American and Hispanic populations compensate for that. This means the US can maintain its population only if the white population becomes a minority in the long run. While Europe is on track to lose roughly 65 million people by 2050, the US is on track to gain 100 million. Accompanying this growth gap will be a widening generation gap. By mid-century, the median age of Japan and most European countries could be well over 50, while the median age in the US will be 41. Going forward demography is increasingly leaning against the developed world. Back in 1950, all the major developed countries – Russia, Japan, Germany, the UK, Italy, and France – were among the world’s 10 most populous nations. In 2050, only the US will remain.

Whilst growth rates are dropping across the world, in the Muslim world fertility rates have reduced over the past decades, but remain well above the replacement rate and this is why the Muslim world, from Indonesia to Morocco will continue to grow for the remainder of the 21st century. Muslims have more children than members of the other major religious groups. Each Muslim woman has an average of 3.1 children, significantly above the next-highest group (Christians at 2.7) and the average of all non-Muslims (2.3). In all major regions where there is a sizable Muslim population, Muslim fertility exceeds non-Muslim fertility.

The growth of the Muslim population is also helped by the fact that Muslims have the youngest median age (23 in 2010) of all major religious groups, seven years younger than the median age of non-Muslims (30). A larger share of Muslims will soon be at the point in their lives when people begin having children. This, combined with high fertility rates, will accelerate Muslim population growth.

After a century of explosive growth fertility rates have slowed and are projected to slow further from 2020. The population in the Muslim world until 2050 is only going in one direction and this is up, although the rate of growth is expected to slow. What this means, going forward, there is few places in the world that will be subject to as much pressure from growing numbers of people as the Muslim world. This rising population will need to be watered, housed; they will need new and modern transportation systems and labour markets. Competition for jobs, especially government jobs, and housing and the poor quality and inadequate provision of public services are prime causes of the deep dissatisfaction with the status quo that marks so many of these societies. The stress these demographic pressures exert—and regional governments’ ability to mitigate them—will play a major role in determining the future trajectory of the Muslim world.

The Death of Political Islam?

Can the EU Survive?