By Adnan Khan Egyptian President Abdel Fattah al-Sisi inaugurated the opening of a major expansion of the Suez Canal with much fanfare and pageantry on August 6th 2015. Aboard a historic yacht and in front of foreign leaders and as helicopters and fighter jets flew by, Sisi made numerous lofty predictions and outlined a grandiose vision for Egypt’s economic future. The new Suez Canal saw the completion of a new part of the existing canal...
11th August 20156 min 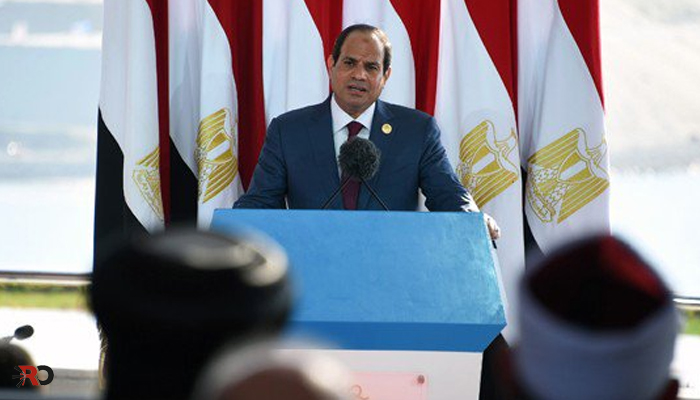 Egyptian President Abdel Fattah al-Sisi inaugurated the opening of a major expansion of the Suez Canal with much fanfare and pageantry on August 6th 2015. Aboard a historic yacht and in front of foreign leaders and as helicopters and fighter jets flew by, Sisi made numerous lofty predictions and outlined a grandiose vision for Egypt’s economic future. The new Suez Canal saw the completion of a new part of the existing canal which doubles the canal’s capacity and cuts waiting time for vessels transiting the canal. The Suez Canal extension will see increased revenue for the central government, but the waterway will do little to alter Egypt’s economic reality. Egypt faces numerous strategic challenges with its economy, which successive leaders circumvented, rather than resolve. As a result the new Canal will do little to alleviate Egypt’s economic woes.

The structure of the Egyptian economy means it is not built upon its strengths and advantages. The Egyptian economy is primarily stimulated by economic activity in food production, petroleum exports, media and tourism. The service sector constitutes 50% of the economy. Having so few sectors dominate the economy means a narrow set of economic activities drive the economy and those not directly engaged in such sectors would not participate in wealth acquisition. This explains why 48% of the Egyptian population, some 39 million people, live in poverty.[4] Successive governments dealt with the prospects of social instability caused by a select few controlling the economy and the high levels of poverty through subsidies.  Successive governments have used an extensive system of subsidies to support consumer goods, including fuels and food. These now account for over 30% of public spending, or 13 percent of the country’s gross domestic product (GDP). Egypt’s energy bill, is a whopping $17 billion![5] The Egyptian leadership never had the money to finance this and resorted debt in order to maintain subsidies and in turn maintain social stability. This explains why the country’s debt stands at $261 billion.[6]

Mismanagement and the demands of IMF and World Bank turned Egypt from an agricultural self-sufficient nation to an importer of food today.  In the 1960’s Egypt was self-sufficient in wheat, grains etc. In the 1990’s under IMF and World Bank pressure Egypt was forced to restructure its economy through increasing exports and reducing the reliance on agriculture. Since 2000 Egypt has suffered from numerous food riots as the nation once self-sufficient in food became dependent on food imports. Today Egypt remains largely self-sufficient in the production of most agricultural products except for wheat, oil, and sugar. But despite this Egypt imports nearly half of its food, including about 60% of its wheat. The country’s agricultural yield for rice is among the highest in the world; throughout the past six years, Egypt’s rice yields have consistently surpassed those of the other leading producers, China, India, and Indonesia. The underlying, strategic problem with feeding Egypt’s 82 million population is that half of the nation’s agricultural production is exported abroad to gain currency reserves, which was one of the conditions for the country to receive IMF loans. Egypt is a major food producer and exporter, with some 6,000 registered companies Food and drinks manufacturing represents an estimated 20% of Egypt’s overall GDP. Annual sales from the entire sector exceed $18 billion. With half of Egypt’s food production going abroad, the shortfall is met with food imports.

A major obstacle to reviving the Egyptian economy is the political considerations of the military and civilian leadership. The civilian leadership has used the economy to enrich themselves and fund subsidies to ensure no uprising ever develops. The Egyptian military has used the economy to enrich itself and to purchase US military equipment. Both these institutions have protected US interests in the region and that’s as far as the political ambitions of the civil-military leadership go. Despite being the largest nation in the region, possessing the largest military and historically and culturally being the regional leader, the political ambitions of the country’s leadership is restricted to being a lynchpin for the US in the wider region. The aid Egypt receives from the US is in effect bribe money for selling the country short of its capabilities.  Unless this pro-US civil-military elite is removed the economy will never work for the people as it’s designed for a tiny elite.

Beyond Sisi’s showboating and grandiose promises, he is doing exactly what his predecessors did. In the ancient world, Egypt constructed the colossal pyramids that to this day is Egypt’s defining image. In the modern era Nasser nationalized the Suez Canal and built the Aswan dam and industrialization followed. Sisi is attempting the same strategy to show that he can navigate the Egyptian people through building to impress and the rest will follow. The absurdity of this project can be seen when one considers the following – $8 billion has been spent for simply reducing the waiting time in the Canal by a few hours at a time when ships using the canal is on a downward trajectory.