by Muhammad Ubaid On Friday 31st July 2015, Egypt and Saudi Arabia signed the “Cairo declaration” which aimed at boosting military and economic ties between the two nations. The deal included Saudi investment in Egypt and the creation of a new “Arab force,” to combat the various challenges in the region. The Egyptian president’s office explained: “The two sides stressed the need to exert all efforts to boost security and stability in the region, and...
9th August 20154 min 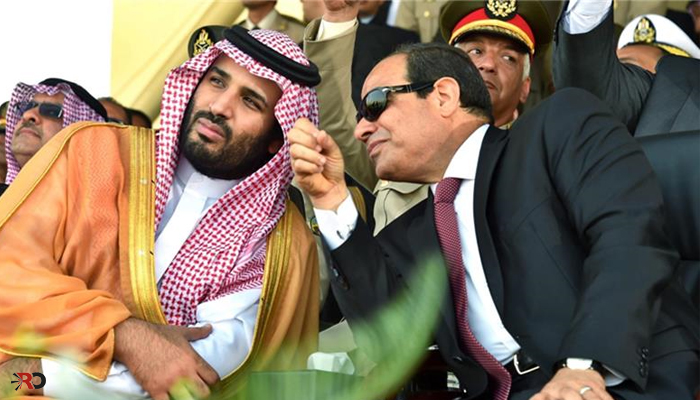 On Friday 31st July 2015, Egypt and Saudi Arabia signed the “Cairo declaration” which aimed at boosting military and economic ties between the two nations. The deal included Saudi investment in Egypt and the creation of a new “Arab force,” to combat the various challenges in the region. The Egyptian president’s office explained: “The two sides stressed the need to exert all efforts to boost security and stability in the region, and to work together to protect Arab national security.”[1] On closer scrutiny the accord is not an independent move by both nations, but an agreement between two pro-US nations looking to strengthen the US position in the wider region.

After the fall of Muhammad Morsi of the Muslim Brotherhood (MB), former Saudi King, King Abdullah joined other Gulf leaders in supporting the military coup that brought al-Sisi to power. In a televised speech, King Abdullah announced: “that the people and government of the Kingdom of Saudi Arabia stood and still stand today with our brothers in Egypt against terrorism, extremism and sedition, and against whomever is trying to interfere in Egypt’s internal affairs.”[2] Saudi Arabia went as far as immediately providing $5 billion in aid and loans, more than any other nation.[3] If this wasn’t enough, Saudi Arabia and the Gulf States pledged a $12 billion aid package to Egypt in order to kick start its dwindling economy.[4] Diplomatic visits have also increased between both countries with three visits so far in 2015 as well cooperation in Yemen where Saudi Arabia is bombing targets. These developments demonstrate the committed support between Saudi Arabia and Egypt.

Egypt has for long been considered the centre of the Middle East. Egypt has the largest population in the Middle East of approximately 80 million people and has the largest and one of the most capable military forces in the region. Financially, approximately 8-12% of international trade travels through the Suez Canal which makes the stability of Egypt a vital issue for international powers.[5] Furthermore, Egyptian media is broadcasted all over the Middle East which means that events in Egypt have a huge impact in influencing opinion throughout the Middle East. Having influence over Egypt would afford a nation considerable clout in the region. As America’s key ally in the region, Egypt has been a lynchpin in protecting US interests in the wider region. For example, Egypt shares a border with Israel and securing this border is vital especially in light of recent activities in North Sinai. This also includes the Gaza tunnels which have repeatedly proven vital for the Palestinian resistance in Gaza. The Arab spring challenged this status quo, when long term dictator Hosni Mubarak was overthrown. This is why controlling Egypt and maintaining influence in the country is important for any global power and this is why there is increased aid and intelligence provided to al-Sisi, especially from the US. [pullquote align=”left” color=”” class=”” cite=”” link=””]The common denominator between both Saudi and Egypt is there pro-US stance.[/pullquote]

Egyptian stability is the most important factor for the US. Contrary to popular opinion, Morsi did nothing to challenge US interests as he maintained the Suez Canal, closed the Rafah tunnels into Gaza and promised to maintain past treaties, including the nation’s peaceful ties with Israel.[6] In fact, Morsi failed to create the political stability required to suppress political dissent. Morsi’s “neither here nor there” style politics displayed a sense of incapability from the Muslim Brotherhood, especially in light of a worsening economic situation where 40% of youth were unemployed. Morsi’s desire to appease Western nations and minorities whilst trying to implement Islamic laws according to a secular constitution meant that there was little to no progress, resulting in many of his own supporters turning against him, eventually leading to his removal on 3rd July 2013. America realised this early on and started to fund Morsi’s own political opponents early on as part of the State Department’s “democracy assistance” programme.[7] This immediately became the position of other nations, who declared the restoration of democracy with the overthrow of Morsi.

The joint actions of Saudi and Egypt in Yemen as well as their actions in the wider region have been used to try and display a degree of independence by both countries. This is contrary to reality; as Saudi airstrikes have done nothing but stall for time as America looks to establish an alternative leadership in the country, away from Hadi and his predecessor Saleh, who have both been pro-British. The common denominator between both Saudi and Egypt is there pro-US stance. Egypt historically has been America’s lynchpin in the region. The emergence of King Salman in Saudi  Arabia has formally moved the kingdom into America’s camp.

The Politics of Nuclear Weapons