The Middle East has been blessed with mineral wealth, which the world’s economy is dependent upon. This was something the US recognized very early and what led to the infamous 1945 meeting between US President Franklin D. Roosevelt and the Saudi King Abdul Aziz ibn Saud aboard the USS Quincy. The US state department described the Middle East In 1944 as: “the oil resources constitute a stupendous source of strategic power, and one of the...
19th July 20155 min

The Middle East has been blessed with mineral wealth, which the world’s economy is dependent upon. This was something the US recognized very early and what led to the infamous 1945 meeting between US President Franklin D. Roosevelt and the Saudi King Abdul Aziz ibn Saud aboard the USS Quincy. The US state department described the Middle East In 1944 as: “the oil resources constitute a stupendous source of strategic power, and one of the greatest material prizes in world history.”[1] Since WW2, the Middle East emerged as the world’s most important source of energy and the key to the stability of global economy.

The Middle East today is the carbon region of the world. It possesses the world’s largest oil and gas fields and dominates Fossil extraction energy production. The region nearly half of the world’s proven oil reserves and produces 34% of the world’s daily oil requirement. The region also possesses 42% of the world’s Gas reserves and produces nearly 20% of the world’s daily Gas requirements. Oil differs from region to region in its thickness and its chemical composition. The oil pumped from the Middle East is the preferred choice since its extraction is relatively simple and its refining is cheaper due to it mainly being the light ‘sweet’ type of crude oil. In contrast the heavier crude oils extracted from the Caspian basin are far more costly to extract and refine and are far more polluting.

Whilst Saudi Arabia and the Gulf states have advanced energy infrastructures much of their populations live in poverty. Much of the energy infrastructure in the Persian Gulf and the Hijaz was developed by Britain and the US. Whilst the region produces over 34% of the world’s daily oil, only 10% of it is refined in the region. 90% of the world’s oil is refined in regions with very little oil, but increasing demand for oil. The US refines 19% of the world’s oil, whilst Europe refines 15.8% of the world’s oil and the Far East refines 33.7% of the world’s oil. Even though the Middle East has the lion’s share of oil, in essence this is useless considering the inability to refine it, for this reason most of the oil is piped to the Far East and Europe to be refined, and then the products are resold to the Middle East. The region has, for the moment, not exploited the other renewable options available to it. The desert geography would give considerable solar prospects, which would lead to the innovation of new technologies, create jobs and reduce the dependency on fossil fuels.

The huge revenues received by the monarchs and autocrats in the region has found its way mainly into foreign investments, external reserves and oil stabilisation funds, foreign military equipment and to repay debts. Very little of this money has been used to construct industry which would have created many jobs, stimulated the region’s economies and brought in taxation for central government. But the reliance on oil has brought with it significant problems. Many of the oil producers rely on energy exports for over 90% of their governments budgets and they constitute nearly all of their exports. This makes them reliant upon the price of oil being above a breakeven point for them to balance their budgets. The problem they face is that rely so much on a commodity, but do not control  oil prices. OPEC was an attempt to deal with these but with the increase in oil production by the US and the increasing discovery of Shale energy, this organization’s influence is being diluted. For Saudi Arabia the share of oil as a percentage of total government revenues is 89%, while the share of oil as a percentage of total exports is 86%. Saudi’s dependency on oil means it needs oil prices to remain above £100 a barrel to balance its budget. When King Salman took over in January 2015, he inherited a kingdom in dire straits as oil prices fell from $100 a barrel to $30 a barrel. As oil revenues collapsed, Saudi Arabia lost $390 billion in anticipated oil profits, in 2015 alone. As revenues fell its budget went from a surplus to a deficit of $100 billion—much higher than it has been in living memory. 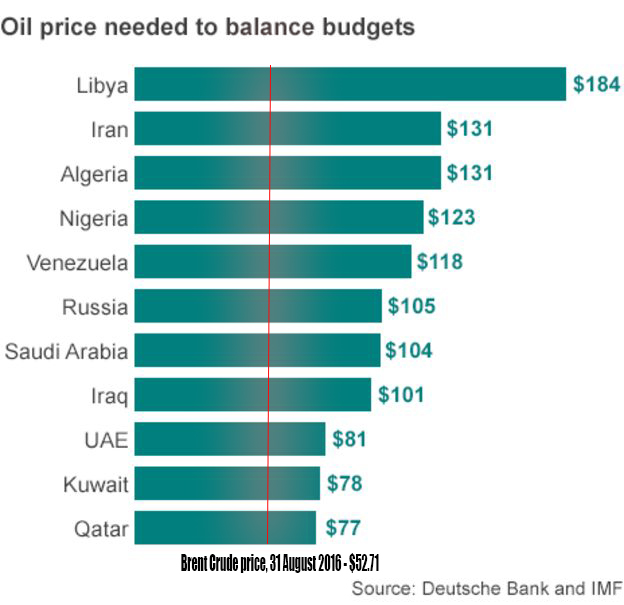 The energy rich nations heavy dependency on oil exports has created a dependency on the oil process and has kept such economies narrowly focused. The energy infrastructure in the region was constructed by foreign companies and today is dominated by foreign companies. Very little technology or knowledge transfer has taken place which could have reduced unemployment significantly. The regional nations have also embarked on major domestic investments in real estate, construction, oil refining, transport and communication and social services. Such huge energy wealth remains in the hands of monarchs, families and business elites with the vast bulk of the population languishing in poverty. In Saudi Arabia the oil wealth remains within the royal family who subsidise the lifestyles of their expanding family or the wealth is spent bailing out Western financial institutions.

The importance of the Middle East, despite developments in shale energy is only set to increase rather than decrease. This is because the Middle East will remain the main producer of oil as it is the cheapest to extract and refine. Shale energy requires more energy to extract and will always cost more than oil wells which were discovered less than a mile underground. The challenge going forward is can this oil bonanza be used to develop and create other industries which will create jobs for the increasing population in the region. For the moment, the rulers in the region have used the oil wealth for subsidies and foreign investment. With a growing population this is no longer sustainable.

[1] U.S. Department of State. Foreign Relations of the United States. 1945, viii, 45,  cited in Joyce and Gabriel Kolko, The limits of power, Harper & Row, 1972, which provides a comprehensive analysis of the development of U.S. policy at the time.

The Future of the Middle East: Economics

The Future of the Middle East: Water Politics