The eruption of the Arab spring in Yemen back in 2011 is today a distant memory. Despite eventually pushing Ali Abdul­lah Saleh from power after 33 years at the helm, he was replaced by his own crony Abd Rab­boh Mansur Hadi. The Houthis, who are a tribe from amongst the Zaidis, who fol­low Shi’ah fiqh comprise 40% of the nations pop­u­la­tion and were big sup­port­ers of the 2011 Arab Spring upris­ing. The Houthis have fought...
27th March 20158 min

The eruption of the Arab spring in Yemen back in 2011 is today a distant memory. Despite eventually pushing Ali Abdul­lah Saleh from power after 33 years at the helm, he was replaced by his own crony Abd Rab­boh Mansur Hadi. The Houthis, who are a tribe from amongst the Zaidis, who fol­low Shi’ah fiqh comprise 40% of the nations pop­u­la­tion and were big sup­port­ers of the 2011 Arab Spring upris­ing. The Houthis have fought the gov­ern­ment on-and-off dur­ing the 2000s, due to decades of being mar­gin­alised and repressed, but both Saleh and his replacement, Hadi, kept them from real power through dialogues and internationally sponsored talks. Today Yemen is in chaos, the Houthis have entered into a protracted struggle with the government in Sanaa, overthrowing it in September 2014. President Hadi has now fled the country[1] and now Saudi Arabia has launched airstrikes against reported Houthi targets in the countries capital.[2] Despite the demands of political change by the people, this small country at southern tip of the Arabian Peninsula is now the battle ground for regional rivalry and international powers.

The trig­ger for the cur­rent ten­sions was the removal of fuel sub­si­dies in July 2014, which was a con­di­tion 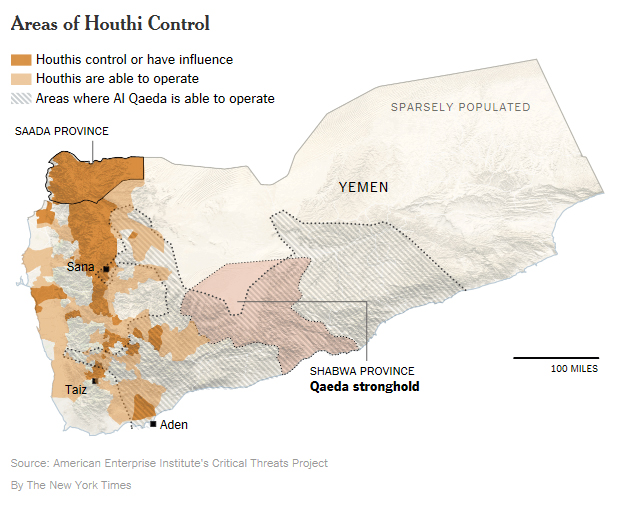 by the IMF for the Yemeni gov­ern­ment to receive fur­ther loans. The IMF imposed the abol­ish­ment of the coun­tries sub­sidy sys­tem, even though half of the nation’s pop­u­la­tion lives in poverty.[3] The Houthis played a key role in the upris­ing against Saleh, but they have been sub­se­quently side­lined in the devel­op­ment of sub­se­quent tran­si­tional and then for­mal gov­ern­ments. With the price of fuel dou­bling this led to the Houthis set­ting up a protest camps in the cap­i­tal, Sanaa. These protest camps spread through the North of Yemen and around the cap­i­tal Sanaa. Pres­i­dent Hadi attempted to appease the Houthis with promises to review the sub­sidy cuts, but this was rejected by the Houthis. This led to the secu­rity forces shoot­ing dead many Houthi pro­test­ers, who were protest­ing out­side the cab­i­net build­ing in Sanaa.[4] As a result of this the Houthis moved towards the cap­i­tal, Sanaa in large num­bers from the moun­tains that sur­round the cap­i­tal and even­tu­ally took over gov­ern­ment build­ings. Pres­i­dent Hadi, sens­ing the dan­ger, signed the Peace and National Part­ner­ship Agree­ment, which gave more power to the Houthis in form­ing the gov­ern­ment includ­ing cab­i­net positions.[5] By January 2015, with his presidential palace surrounded, a coup effectively took place, with the Houthis setting up a revolutionary government in Sanaa and expanding to the Southern port of Aden.

What strengthened the Houthis has been support from Iran. Iran has a policy of supporting Shi’ah groups in the region in order expand its influence and dominate the region. Iran has supplied weapons, money and training to the Houthis which was critical to their takeover of Yemen’s capital in September 2014. The US Secretary of State John Kerry confirmed Iran ‘contributed’ to the Houthi takeover and the collapse of the Yemeni government.[6] The Houthis have been going to Iran and Lebanon for military training and a senior Iranian official told Reuters that the Quds Force, the external arm of the Revolutionary Guard, had a ‘few hundred’ military personnel in Yemen who train Houthi fighters. He confirmed around 100 Houthis had travelled to Iran this year for training at a Revolutionary Guards base near the city of Qom. The official said there were a dozen Iranian military advisers in Yemen, and the pace of money and arms getting to the Houthis had increased since their seizure of Sanaa.[7] This expansion of Iranian influence and spread of Houthi control right on Saudi Arabia’s borders is what led it to bomb targets in Yemen, especially after Hadi fled the country.

The Houthis have also received international cover from the US. Senior US intelligence official Michael Vickers confirmed in January 2015 that lines of intelligence to the Houthis has been open for some time. Despite the Houthi takeover of Sanaa in September 2014: “the Houthis are anti al-Qaeda, and we’ve been able to continue some of our counterterrorism operations against al-Qaeda in the past months.”[8] Charles Schmitz, an expert on Yemen at the Middle East Institute confirmed: “the Houthis’ anti-al-Qaeda agenda, however, in part a reaction to AQAP’s assassination of the current Houthi leader’s father, synchronizes nicely with both US and Iranian interests in the same way that the United States, Iran and Iran-backed groups are on the same side in Iraq against the Islamic State group (IS).”[9] It was the US who pushed for Saleh to hand over power and step down when the uprisings was in full swing in Yemen. But it was Britain and the EU that, for a long time, backed Saleh and his successor Hadi. The EU in a statement on 22 Sep 2014, when the Houthis took over Sanaa said: “Government institutions must return to the control of the legitimate authorities, under the leadership of President Abd Rabbo Mansour Hadi, the Head of State.” The British ambassador to Yemen Jane Marriot confirmed to Middle East online in September 2014: “I do not have a direct relationship with Ali Abdullah Saleh, but I communicate with the General People’s Congress including parties close to it.” She admitted her communication with the party of Saleh and as he runs the party and has no rival or opponent this would indicate she has been speaking regularly with Saleh. All of this shows there is international struggle to control the political leaders of this strategically important country between Britain and the US, with US Iranian interests aligning and Saudi and UK interests aligning.

Despite international coverage of Yemen constantly being explained through a sectarian lens, the struggle within Yemen is a political one with different factions fighting for political power. It is not a sectarian struggle. The Houthis do appear to have bitten more than they can chew, with the takeover of the capitol and the southern parts of the country. This is because despite the Houthis expanding its area of influence and control the areas it does control and has done so  for months, they have not been able to maintain order. Despite controlling most of the country, the Houthi leadership continues to call for new presidential elections and a new parliament, indicating they are merely looking for influence in a new Yemen, but lack the capability to rule the country itself. This lack of capability and ambition is what has opened the Houthis to regional and foreign agendas. But their lack of political understanding can be seen from the fact that Ali Abdullah Saleh has been cooperating with them, and his help, despite rising up against him, has been welcomed by the Houthi leadership. Al Jazeera confirmed it received a leaked tape of a phone conversation between Saleh and a Houthi leader coordinating tactics in October 2014, after the fall of Sana’a.[10] A UN report in February 2015 concluded that Saleh “provided direct support” to the Houthis during their takeover of the capital, ordering his supporters not to impede their fighters and directing his son, former military commander Ahmed Ali Saleh, to assist them in some capacity.[11]

The peo­ple of Yemen rose up to remove a bru­tal dic­ta­tor.  The upris­ing saw the col­lapse of gov­ern­ment insti­tu­tions and the army as many defected. How­ever real change did not take place in Yemen; only a trans­fer of power within the rul­ing elite occurred. The neglect of most of the coun­try by Saleh led to many rebel­lions and upris­ings in the coun­try. Saleh in the past dealt with many of them mil­i­tar­ily. How­ever the upris­ing in 2011 pre­sented Amer­ica with the oppor­tu­nity to inter­fere in Yemen and remove Saleh once and for all due to his loy­alty to Britain. Saleh has worked to main­tain the sta­tus quo through giv­ing con­ces­sions to all the var­i­ous fac­tions of the coun­try – whilst always main­tain­ing his posi­tion. No one regional or international power as well as domestic factions has enough influence to completely change the balance in their favor, so its expected some sort of deal will need to be made between them. Whilst the Houthis are best placed for such a deal, their lack of political understating – the fact they are now working with Ali Abdullah Saleh, who they initially rose up against means both Saleh and Britain may get proportionally more than their influence from any future deal.