By Adnan Khan In a video released by the pro-ISIS Aamaq News Agency on Friday 30 January 2015, ISIS acknowledged that its fighters have been defeated in the Syrian northern town of Kobani.[1] The battle for Kobani which began in late 2014, received much global media attention as over 200,000 Kurds from the town crossed the border into Turkey leading to the call for all Kurds to come to the rescue. Comparisons were made with...
3rd February 20156 min 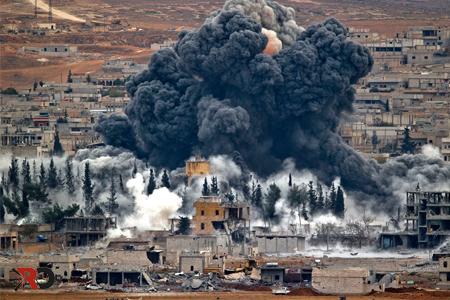 In a video released by the pro-ISIS Aamaq News Agency on Friday 30 January 2015, ISIS acknowledged that its fighters have been defeated in the Syrian northern town of Kobani.[1] The battle for Kobani which began in late 2014, received much global media attention as over 200,000 Kurds from the town crossed the border into Turkey leading to the call for all Kurds to come to the rescue. Comparisons were made with the Nazi defeat in Stalingrad, which was the beginning of the end of the Third Reich. Since the ISIS declaration of the Caliphate back in June 2014, ISIS expanded its control and entered into many battles with rebel groups, al-Assad’s’ forces and the US air force. Analysing the loss of Kobani reveals ISIS is now on the defensive, but not defeated.

It was in September 2014 that ISIS fighters captured some 30 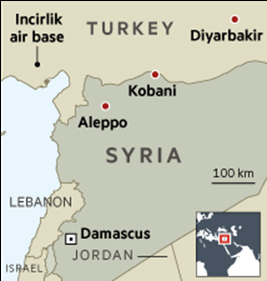 0 Kurdish villages near Kobani and thrust into the town itself. Tens of thousands of refugees spilled across the border into Turkey. By October 2014, ISIS control of Kobani was so widespread that it even made a propaganda video from the town featuring a captive British photojournalist, John Cantlie, to convey its message that ISIS fighters had pushed deep inside despite US-led airstrikes.[2] But after 134 days of fighting harrowing photographs and video coverage show the devastation and bloodshed caused by the four-month long battle,[3] today Kobani is in ruins. The battle for Kobani killed some 1,600 people, including 1,075 ISIS members, 459 Kurdish fighters and 32 civilians, the Observatory reported earlier in January 2015.[4] As ISIS relies on propaganda to spread ‘invincibility,’ as a central tenant of its doctrine, this has been undermined with the defeat in Kobani.

US airstrikes made the strategic difference in the defeat of ISIS in Kobani. In admitting defeat, ISIS fighters confirmed in Arabic: “the warplanes were bombarding us night and day. They bombarded everything, even motorcycles, we had to withdraw and the rats advanced.”[5] The US-led air assault began in Syria on September 23 2014, with Kobani the target of about a half-dozen airstrikes on average each day. More than 80% of all coalition airstrikes in Syria have been in or around the town. At one point in October 2014, the US air dropped bundles of weapons and medical supplies for Kurdish fighters – a first in the Syrian conflict.[6] Kobani is a small town on the border with Turkey and in the expectation of US air strikes ISIS did not conduct concentrated attacks, which would be ideal targets for US air strikes. But the pictures emerging from Kobani show a town flattened, with buildings laying derelict. This would indicate the town was bombed heavily from the air and in all likelihood indiscriminately. It was this aspect of the battle that appears to have broken the back of ISIS which led to the death of many of its commanders.

The ISIS onslaught of Kobani unified the various Kurds into a spirited defence of the town. Kurdish People’s Protection units (YPG) and Free Syrian Army fighters organised the defence of the town and numbered in the thousands. The massacres conducted by ISIS turned Kobani into the Kurdish ‘Stal­in­grad,’ becoming a sym­bol of Kur­dish defi­ance. As a result the Kurds pour­ed resources into the city to resist and repel ISIS. In October 2014 the arrival of heavily armed Kurdish peshmerga fighters from Iraq, neutralised ISIS’ artillery advantage, bringing key areas of Kobani under Kurdish control. The defeat in Kobani raises a strategic issue, how was ISIS able to defeat more heavily armed Iraqi force units in Iraq, repel a force 15 times its size in Mosul, but ultimately face defeat in Kobani by a much less capable force. At RO we have long questioned US military strikes in Iraq and in Mosul many commanders have confirmed they were ordered to leave Mosul rather than repel ISIS. The Kobani defeat shows ISIS is not as capable as it has propagated and its other high profile victories are questionable.

From a strategic perspective Kobani was of minimal strategic importance to ISIS but it continued its repeated and costly attempts to seize the town. Kobani was a severe drain on ISIS resources, depriving them of large numbers of fighters for other areas. When ISIS was being pushed out of Kobani, it was dispatching fresh recruits with very little training; some less than 18 years of age. An ISIS victory in Kobani would have had lit­tle oper­a­tional value and an even less effect on the direc­tion of the over­all con­flict in Syria. Seiz­ing the Town 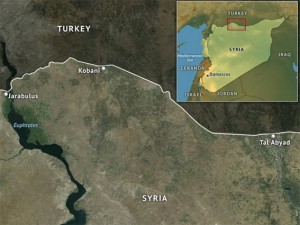 would have enabled ISIS fight­ers to shorten the route between the cap­tured bor­der cross­ing towns of Jarab­u­lus and Tal Abyad by not hav­ing to cir­cum­vent Kobani. Strat­for noted that numer­ous ISIS fight­ers recog­nised this fact early on and report­edly sought to pri­ori­tise other bat­tle­fronts but were over­ruled by ISIS com­man­der Abu Bakr al-Baghdadi.[7] Even the gains ISIS made in Iraq’s Anbar province were neglected as it sent hun­dreds or thou­sands of fight­ers to Kobani expos­ing them to US airstrikes. By devot­ing dis­pro­por­tion­ate resources and per­son­nel to seize a town of mar­ginal impor­tance, ISIS dis­tracted itself from more press­ing issues in Syria. The ISIS obses­sion with Kobani has now set the group back con­sid­er­ably, gains for sym­bolic rea­sons it greatly prioritised. This was sim­i­lar to Germany’s dis­as­trous obses­sion with Stal­in­grad in 1942, despite hav­ing already iso­lated and reduced the city to rubble.

ISIS is currently on the defensive facing challenges in both iraq and Syria. ISIS is increasingly beleaguered as it faces multiple difficult fronts against rebels, Kurdish fighters and loyalists. Events in Iraq and Kobani has distracted ISIS in Deir el-Zour, allowing government forces to widen their perimeter and attempt to seize the city. The evolving situation in Iraq is also increasing the demand on ISIS’s limited fighters and resources, further spreading the group thin. Coalition air power has repeatedly struck the oil infrastructure controlled by ISIS, impacting its ability to finance its efforts. Also considerable number of reports point to dissent within the ranks and from the citizens forced to live under ISIS rule.[8] For the moment ISIS is on the retreat but it is not defeated, despite the loss of Kobani.

The Battle for Syria

The Politics of Anti-Terror Laws