The announcement by Saudi state TV, of the death of King Abdullah bin Abdulaziz, aged 91, will bring to an end the second generation princes who have ruled the Kingdom for most of its 80 year history. It now ushers in a third generation of princes who number in the thousands. We are republishing this 2012 analysis which analysed the House of al-Saud By Adnan Khan Saudi Arabia, with the world’s largest oil reserves,...
22nd January 20156 min 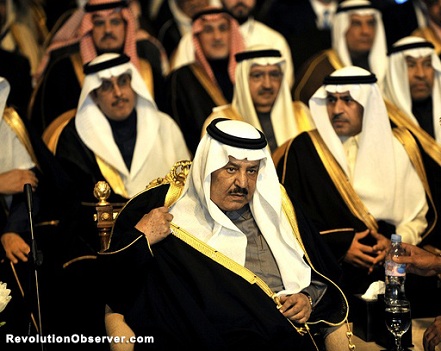 The announcement by Saudi state TV, of the death of King Abdullah bin Abdulaziz, aged 91, will bring to an end the second generation princes who have ruled the Kingdom for most of its 80 year history. It now ushers in a third generation of princes who number in the thousands. We are republishing this 2012 analysis which analysed the House of al-Saud

Saudi Arabia, with the world’s largest oil reserves, is a critical piece in the jigsaw of international order. With the passing of King Abdullah, the second generation princes who have ruled the country for most of its 80 year history is effectively at an end raising the prospects of potential instability due to a power struggle amongst the ruling family.
Modern Saudi Arabia was a creation of the Sykes-Picot Agreement in 1916,  a secret understanding between Britain and France defining their respective spheres of influence after World War I. King Abdul-Aziz al-Saud (Ibn Saud) led a band of warriors to capture his ancestral city of Riyadh from a rival family in 1902. Britain signed the “Treaty of Darin” with Ibn Saud that incorporated the lands of the Saud Family as a British protectorate in December of 1915.[1] The western coastal region, Hijaz, was taken next by Ibn Saud along with Mecca and Medina in 1925. He then utilized his 22 marriages to shape and control his vast kingdom. But it was his close alliance with the US that helped him ward off threats towards the nascent state. He signed a concession agreement with Standard Oil of California (now Chevron) in 1935, which included handing over substantial authority over Saudi Oil fields. Standard Oil later established a subsidiary in Saudi Arabia called the Arabian American Oil Company (Aramco), now fully owned by the Saudi government.
There are three key pillars that the house of Saud rests upon, allowing it to play a major role in the region. The first of these is the dominance of the royal family in Saudi politics. The Saudi royal family is effectively an oligarchy that has crafted an absolute monarchy, ruled by consensus. As a result the family continues to dominate the political architecture of the country with no other centers of power existing. The throne of Saudi Arabia changes hands through a power transfer that remains firmly within the Saud clan. Ibn Saud is believed to have had at least 70 children, with at least 16 sons still alive. They and their offspring form a core of about 200 princes who wield most of the power. Estimates of the total number of princes range anywhere from 7,000 upwards. The family’s vast numbers allow it to control most of the kingdom’s important posts and to have an involvement and presence at all levels of government. The key ministries are reserved for the royal family, as are the thirteen regional governorships.
The Sauds know their own governing elite is deteriorating. Saudi Arabia is a state that, as its name attests, is based on loyalty not to a terrain or an idea but to a family. Abdulaziz Ibn Saud, who established the country along with his son Faisal bin Abdulaziz (the third monarch), dominated the first generation of Saudi rulers. The second generation has been dominated by the “Sudeiri Seven” – the seven sons of Ibn Saud’s favorite wife, Hassa bint Ahmad al-Sudeiri – who oversaw political life, often as kings, giving coherence to the family and thus to the ruling power structure. But that group is disappearing. The current crown prince, Salman, the sixth oldest Sudeiri, is 76. In the third generation, 19 grandsons will compete with 16 surviving sons of Ibn Saud on the Allegiance Council, appointed in 2006 to formalize the succession process. And there are many more grandsons outside the council.
The second pillar has been the numerous and complex patronage networks established to consolidate control of the oil rich nation. The descendants of  Muhammad ibn Abd al-Wahhab, the 18th century founder of the Wahhabi school of thought is only second in prestige to the royal family with whom they formed a mutual support pact and power-sharing arrangement nearly 300 years ago.[2] This pact maintains Wahhabi support for Saud rule and thus uses its authority to legitimize the royal family’s rule.[3] The most important religious posts are closely linked to the al Saud family by a high degree of intermarriage. The religious scholars have promoted the royal family as defenders of Islam through their international efforts in constructing mosques. In situations in which the public deemed certain policies of the royal family questionable, the scholars would invoke fatwas to deflect any dissent. The Grand Mufti of Saudi Arabia issued a fatwa opposing petitions and demonstrations in the middle of the Arab Spring; his fatwa included a “severe threat against internal dissent.”[4]
The third and final pillar is the country’s mineral wealth, which is concentrated in the royal family and the hands of a few other well-positioned families. The royals receive stipends of varying amounts, depending on their position in the bloodline of King Abdul-Aziz.  Possessing the world’s largest oil field has allowed the royal family the means to establish and maintain patronage networks that helped build tribal alliances.
Saudi Arabia has constructed its foreign relations to protect and enrich the monarchy and in turn the family of Saud. Put within the context of its immense mineral wealth and military riches, Saudi Arabia’s role in the world is largely limited to a mere symbolic leadership due to having the two holy Islamic sites, Makkah and Madina, within its borders. Saudi Arabia has played a role in a handful of regional issues such as hosting negotiations for the two state solution and being a hosting ground for US bases. It is dominated by the royal family who have maintained an internal balance, which keeps them in power. Saudi Arabia was a nation created by the Saud family for the Saud family and as another one of its kings comes to his end in all likelihood there will be a power struggle by various groups of princes whose number is anyone’s guess.

The ISIS Caliphate 6 Months on

The Battle for Syria