By Adnan Khan Two recent events took place which received some global media attention and would indicate ISIS is expanding its capabilities and reach. On 12 January 2015 as Barack Obama gave a speech in Washington on cybersecurity,[1] as he was speaking, ISIS successfully hacked the US Central Commands twitter account in an act of cyber Jihad.[2] On 14 January 2015 Saudi Arabia revealed details of its 600-mile-long “Great Wall,” to separate the country from...
21st January 20157 min 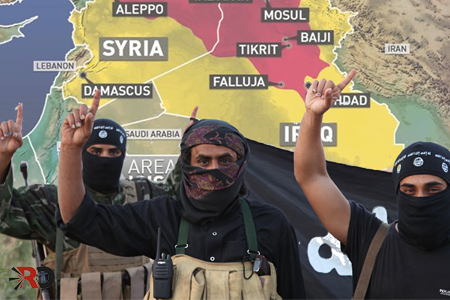 Two recent events took place which received some global media attention and would indicate ISIS is expanding its capabilities and reach. On 12 January 2015 as Barack Obama gave a speech in Washington on cybersecurity,[1] as he was speaking, ISIS successfully hacked the US Central Commands twitter account in an act of cyber Jihad.[2] On 14 January 2015 Saudi Arabia revealed details of its 600-mile-long “Great Wall,” to separate the country from Iraq. With much of the Saudi-Iraq border under the control of ISIS the buffer zone will consist of five layers of fencing with watch towers, night-vision cameras and radar cameras.[3] All of this was after a suicide bombing and gun attack killed two Saudi border guards and their commanding officer on 5 January 2015, which the Kingdom considered the first attack by ISIS on Saudi Arabia.[4] It has now been over 6 months since the ISIS announcement of the Caliphate and whilst they have expanded their territorial control and faced-off against the other rebel groups, a closer examination of ISIS success reveals much of it is a mirage in the desert.

ISIS’s presence in Syria can be traced officially to April 2013 when Abu Bakr al-Baghdadi declared  the  merger between his group in Iraq and Jabhut al-Nusra in Syria. The rejection of this by al-Nusra leader Muhammed Joulani led to the creation of ISIS which entered into a protracted battle with al-Nusra and every other rebel group in Syria seizing territory from them. Today, most of the Iraqi-Syrian border is in ISIS hands and much of the north of the country from Deir ar Zour to ar-Raqqa governorate and Aleppo  governorate is under ISIS control – although Aleppo is still being contested. Whilst this territory is vast, likely to be in the range of 400 square miles it is of little str 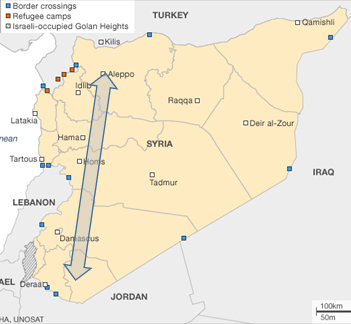 ategic importance. Ar-Raqqah to Mosul – the traditional region of al-Jazirah is of little economic, historical or geopolitical weight. It is a desert heartland and what agricultural potential is there is usually affected by drought and as a result the population in this area of Syria has historically been extremely small. Deir al-Zour and Ar-Raqqah, even prior to the uprising played only a minor role in Syrian politics. Syria’s core or heartland is in the West of the country – the corridor running from Aleppo in the north to Damascus in the South. This is why Syria’s historic political and economic centres remain the cities of, Aleppo, Hama, Homs, Damascus and Deraa. Despite gaining most of the global media headlines ISIS controls none of the key territory in Syria.

ISIS shot to fame due to their rapid conquest of Iraq’s largest city after Baghdad, Mosul, in June 2014. This was a significant victory for ISIS as it defeated two army divisions that were stationed in Mosul. This was around 30,000 troops, there were also an additional 10,000 federal police and 30,000 local police and likely, some Iranian Quds Force officers. The Iraqi army had tanks, planes, and Amer­i­can train­ing. ISIS had never fielded a tank or a plane. The Iraqi army in reality was inept, incompetent, full of nepotism and corruption and was really composed of volunteers looking for a regular salary than a fighting forces securing the country. The military was led by an even more corrupt political class and sectarian leaders more interested in preserving their own office rather than defending the country. The capitulation of the Iraqi army proves their dire state rather than ISIS capability. There i

s also significant evidence from many Iraqi commanders, who were in Mosul at the time of the attack, that they were ordered to leave the city and to leave their equipment behind. This decision to abandon Mosul could only have come from Malaki himself. This explains why ISIS has struggled after months of fighting in Kobani. A town only a tiny fraction of Mosul. Despite mainly facing Kurdish fighters and other fighters who reside in the town ISIS has been losing ground in this northern town on the border with Turkey. All this has taken place despite ISIS com­man­der Abu Bakr al-Baghdadi sending thou­sands of fight­ers to Kobani, leading many to call Kobani ISIS’s Stalingrad.

On the global scene ISIS has confirmed all the stereotypes many have of an Islamic state. Beheadings, killings, murders, kidnappings, slavery, lack of justice, dictatorship and poverty are the images the world has of the ISIS Caliphate. Despite the slick use of social media, none of this has showcased the capabilities of a state or why the Muslims around the world should immigrate to the Caliphate. There is no doubt ISIS is composed skilled multimedia personnel and acoustics engineers, but what is needed to develop a modern state is engineers and skills to develop industry, weapons and infrastructure. ISIS for the moment is surviving on loot from Mosul and as a result can shoot down a military jet or counter a tank, but tackling an entire squadron or permanently neutralising air-sorties against a conventional army that can constantly produce military platform is another matter. This is why ISIS can do nothing against US air attacks supported by the other air forces in the region as they lack complete authority over territory they purport to control. ISIS consists of a loose coalition of 20 year olds, former Ba’athists and many foreigners and is at most an insurgent force with little capability in running a state.

Anecdotal reports suggest food, medicine and other essential goods are in scarce supply and that the residents of cities such as Raqaa in Syria and Mosul in Iraq are becoming unhappy with the many taxes the Islamic State has levied to support its economy. With very little other economic activity, shaking down the local population for taxes can work only for so long until people are bled dry.[5] ISIS has turned most of Iraq and much of Syria into another North Korea, isolated in the world and not presenting any positive image of the Caliphate. ISIS territories, which are mostly arable desert, are not conducive for economic development and it would be impossible to establish a state upon it in order to survive. A modern nation will need to engage in international trade to survive. This requires mutual recognition between ‘states’ and some international credibility. Basic equipment such as an MRI machine for a Mosul hospital or chemicals to treat water, as well as medical drugs or the infrastructure for air transport requires international relations. The nations that produce such equipment and materials cannot and will not sell to ISIS, turning them into another North Korea. This is a huge blow to the ‘Islamic project’ and its credibility.

ISIS is considered by many as the most successful Jihadi group that controls large sections of Syria and Iraq. Although it has accomplished a lot over the past 6 months, jihadi emirates have generally been relatively short-lived. ISIS has grown on the ground in Iraq and Syria, both by absorbing other groups and by recruiting new local and foreign fighters. It has however not expanded beyond its core areas of operation. The organisation’s growth outside its core area has only been when other groups rebranded themselves. Only a limited number of groups that have declared allegiance to ISIS, these groups have generally been splinters off existing jihadi groups rather than new entities. ISIS supporters around the world have generally been online and a few pseudo-clerics with little credibility. After 6 months ISIS possesses substantial territory but little else that is needed to function as a modern state.

The House of Saud