By Adnan Khan This week saw the celebration of the 25th anniversary of the fall of the Berlin wall. Built in 1961 to stop people fleeing from communist East Germany, when it was torn down in 1989 it became a symbol of the collapse of the Soviet Union, the end of the cold war and the bankruptcy of Communism as an ideology.  Much has changed since then, Russia revived much of its fortunes after a...
14th November 20146 min 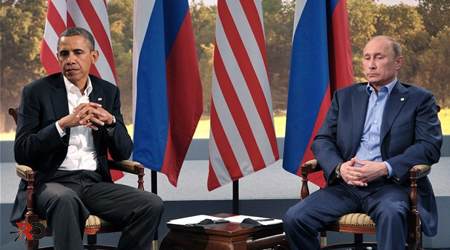 This week saw the celebration of the 25th anniversary of the fall of the Berlin wall. Built in 1961 to stop people fleeing from communist East Germany, when it was torn down in 1989 it became a symbol of the collapse of the Soviet Union, the end of the cold war and the bankruptcy of Communism as an ideology.  Much has changed since then, Russia revived much of its fortunes after a decade of chaos.  This led to Mikhail Gorbachev, the 83-year-old former leader to warn that tensions between the US and Russia over Ukraine have put the world on the brink of a new cold war.[1] The Ukraine crisis will reach its first anniversary in December and has become the latest battleground for the worlds powers. A report published in the same week reported 40 close military encounters between Russia and the west in the past eight months alone.[2] Whilst modern Russia has global ambitions, a closer examination shows that despite media reports of a new Cold war, much of this is blown out of proportion as Russia is a shadow of its former self.

Whilst Russia has gained much media coverage for its role in Syria the reality is modern Russia has zero presence in the Middle East, let alone Syria. Throughout the Cold War the Soviet Union struggled to gain a foothold in the Middle East and the region remained a battleground between Britain and the US. Britain and the US battled it out for the region, supporting dictators, military coups and monarchies. The Soviets were only able to establish military and commercial ties with some countries in the region such as Egypt and Syria, none of this translated into political influence.  Whilst Communism did spread across the region it failed to reach a position of being applied in the region despite the rhetoric by some rulers of centralised government and nationalisation of industry.  Today Russia has maintained some of its former commercial ties e.g. Syria, but the US has more political influence over the government in Damascus.

Ever since the collapse of the Soviet Union, Ukraine has been a political football with both Russia, the EU and the US fighting to bring the nation into its orbit. In its recent his­tory, Ukraine was the most impor­tant repub­lic out of the 15 for­mer mem­ber republics of the Soviet Union. Despite a significant ethnic Slavic population who dominate the East of Ukraine the West has been able to snatch Ukraine from Russia.  The US and EU with extensive support to opposition groups were able to instigate a number of colour revolutions in former Soviet Republics that overthrew rulers loyal to Russia. In 2005 both the US and EU instigated the Orange revolution that saw pro-West leaders take power in Ukraine.  Similarly in late 2013 the US openly supported protesters against President Victor Yanukovych, when he refused to sign a trade pact with the EU leading to mass protests.  Despite Ukraine being on Russia’s border and despite its long history of influence in the country, Russia does not have full control of the country on its border and this has allowed the West to infiltrate the country creating a significant western bloc against Russia. 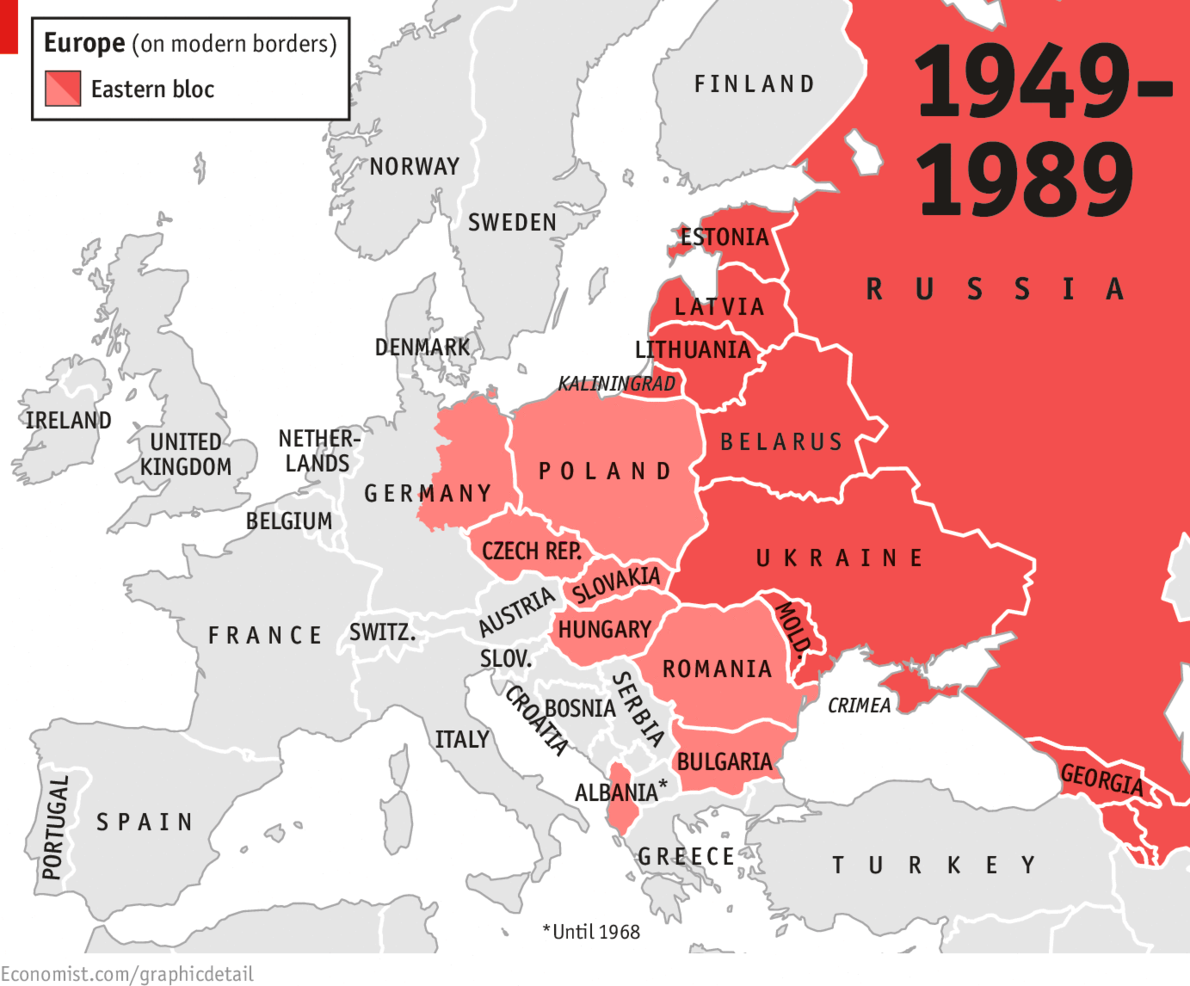 opportunity to gain influence over the former Soviet republics and bring their influence and borders right on the door steps of Russia. In Eastern Europe the EU was able to integrate many Soviet Republics, such as the Baltic States – Estonia Latvia and Lithuania, the Czech Republic, Hungary, Poland, Slovakia, Slovenia, Romania and Bulgaria. The US was able to bring many of the former Warsaw Pact members into its NATO security umbrella. In 1999 Hungary, Poland and the Czech Republic joined NATO, whilst Bulgaria, the Baltic States, Romania and Slovakia followed suit in March 2004. In Central Asia Russia has struggled to maintain dominance over most of the ‘Stans,’ the US has been able to gain influence over Uzbekistan, Turkmenistan and Kazakhstan and is attempting to bring Kyrgyzstan and Tajikistan within its orbit. In response Russia has attempted to maintain its influence over Central Asia through its Customs union and though integrating countries into its security umbrella – the Collective Security Treaty Organization (CSTO). Russia is able to compete with the US due to factors from the Soviet era in Eastern Europe and Central Asia, however these tools have not expanded beyond these regions.

The Soviet Union’s defence relations played a central role in its power projection capabilities. Due to the nature and length of defence contracts the Soviet Union was able to form and solidify strategic relationships with other nations. During the Cold War the Soviet Union competed with the US in the arms and space race. Both nations had huge military industrial complexes which produced technologically advanced weapons. The decade after the collapse of the Soviet Union led to economic and financial chaos leading to the deterioration of arms and equipment due to inadequate servicing. Today up to 90% of this equipment has not been maintained or can no longer be used.[3] Russia’s defence industry is today a relic of the Cold War era, and Russia continues to struggle exporting its equipment. Russia possesses a very sizable arsenal, which suffers with deep structural problems associated with age and the lack of maintenance. As the equipment continues to age, maintenance becomes more expensive, taking up more of the defence budget. The equipment will also be retired at an ever-increasing pace as it becomes obsolete. The Russian military therefore is dependent on increased military funding if it wishes to maintain its current combat potential, much less increase it. Whilst the Soviet Union challenged the US in the arms and space race, today’s Russia is militarily weak to use this as an effective tool.

In 1917, Russia was a poverty stricken backward nation. Then it embraced Communism and completely changed its fortunes. The Soviet Union excelled in spreading communism, winning over many people from the West from labourers to intellectuals to politicians. Many around the world were attracted to the Communist doctrine of shared ownership, the regulation of private ownership and the centrally driven economy. For seven decades the Soviet Union challenged the Capitalist world and its position as an ideology.  The collapse of the Soviet Union led to the replacement of Communism and as a result, Russia today has nothing in the realm of ideology, values, thought, philosophy or culture to spread around the world. Russian foreign policy is not aimed at advancing any values but only to protect its strategic interests – the motherland. Whilst the Soviet Union attracted many to the Communist ideology, today the world in no way wants to model itself on Russia or its culture. Much of the former Soviet republics, today, despise Russia and its culture and are more attracted to the West. Russia poses a strategic threat to the world’s superpower in some regions of the world, it however does not pose a global threat to the world’s superpower – the US.