By Adnan Khan Exactly 100 years ago a series of crisis, unleashed in the Balkans set the stage for what came to be known as the Great War. 100 years ago in June the assassination of the heir to the throne of the Austria-Hungary Empire, in Sarajevo, led to an ultimatum to the Kingdom of Serbia – it was Gavrilo Princip of the Young Bosnia group who assassinated Archduke Franz Ferdinand of Austria. Before...
11th June 20146 min 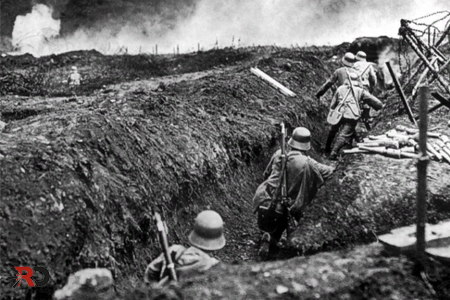 Exactly 100 years ago a series of crisis, unleashed in the Balkans set the stage for what came to be known as the Great War. 100 years ago in June the assassination of the heir to the throne of the Austria-Hungary Empire, in Sarajevo, led to an ultimatum to the Kingdom of Serbia – it was Gavrilo Princip of the Young Bosnia group who assassinated Archduke Franz Ferdinand of Austria. Before July ended in 1914, the first shots were fired. The crisis in the Balkans drew in the worlds powers, over 70 million military personnel were mobilised in one of the largest wars in history. When the World War ended in 1918, over 37 million people had perished. After the war some empires collapsed whilst others ceased to exist, the Ottoman’s and Austria-Hungary were dismantled, the map of Europe was redrawn. As many look back at WW1 on its 100 year anniversary, RO looks at four key aspects that defined, what was at the time the world’s largest conflict.

Firstly, the British Empire was the world superpower at the turn of the 20th century. Having industrialised before any other power, the Empire had been the world’s uncontested power for a century.[1] Britain dominated the world’s oceans and trade routes with its Navy and colonised large chunks of the world, in what at the time the world’s largest Empire.[2] Britain maintained a global balance of power by entering into alliances with empires and nations against those that challenged its supremacy.  Napoleon’s attempt to conquer Europe was seen of by Britain in multiple coalitions, finally ending at the battle of Waterloo in 1815.[3] Britain created various alliances against the Russian Empire to maintain ‘Pax Britannica’ well into the 20th century. German unification in 1871 would present the empire with its biggest threat. Germany’s rapidly growing industrial economy and powerful military, soon dominated Europe. When Kaiser Wilhelm II, was coroneted in 1888, though hot-headed, his ambitions were to challenge British supremacy.[4] British historian sir Llewllyn Woodward encapsulated British views at the time: ‘Germany, like every other power, was free to build for herself a large fleet as she might wish. The question was one of expediency and of realist calculation. A German battle fleet could not be other then a challenge to Great Britain, the dominant sea power.’[5]

Secondly, prior to 1871 Germany was divided into hundreds of contending kingdoms. Many kings and rulers tried to unify the German states without success. As a result the German people engaged in many internal wars and conflicts amongst each other. Overrun by France in the Napoleonic wars (1800 – 1815) these competing states were transformed by Prussia into a unified military power by the iron will of its chancellor, Otto von Bismarck.[6] After unifying these states into a united Germany by 1871, Germany turned its army on Europe’s traditional powers, overrunning Paris and capturing the French emperor. Germany literally emerged on the international scene overnight, sending and shockwaves across the global order at the time. Very quickly unified Germany became larger, wealthier and more populace and set its sights on challenging the global balance of power. When Austria-Hungary declared war on Serbia in 1914 – it was effectively a German satellite state, Germany mobilized its huge army to invade Belgium and Luxembourg before moving towards France and simultaneously invade Russia, who supported Serbia. It would take a coalition of global proportions to halt German conquest of Europe in the world’s global conflict.

Thirdly, WW1 was the world’s first industrial war. The industrial revolution from 1770-1850 had transformed Europe, factories churned out mass produced goods for export to colonies and steel factories built bigger, more powerful ships. Steel production helped build much technology that had never been used before like tanks and planes. Much of WW1 combat involved trench warfare, which ran from the English Channel down to Switzerland in which hundreds often died for each yard gained. Chemical weapons were first used as a weapon of mass destruction. Introduced by Germany on 31 January 1915 during the Battle of Bolimov, it was later used by all the powers. WW1 was the first conflict in which submarines were used as a weapon of war. It was just before the war the relatively sophisticated propulsion system of diesel power while surfaced and battery power while submerged was introduced. Britain relied heavily on imports to feed its population and supply its war industry, and the German navy attempted to blockade and starve Britain using U-boats to attack merchant ships in unrestricted submarine warfare. Whilst much is made of the technological advances made in WW1, when the war ended in 1918 in their bloody struggle for interest’s both Germany and Britain sent many of their sons to war, for Britain over a million of its men never returned and for Germany 2 million, of its sons perished.

Fourthly, the seeds of conflict that remain today in the Middle East was also laid during WW1. In 1917 when the Bolsheviks seized power in Russia, Lenin’s communists discovered amongst the documents of the Czarist foreign ministry a secret document, that outlined plans to carve up the Ottoman Empire. The Sykes-Picot Agreement of 1916 was a secret understanding between Britain and France defining their respective spheres of influence and control of the Middle East. The borders and the leaders of all the Arab states were decided upon by Britain and France. Britain and France concluded a secret oil bargain agreeing in effect to monopolize the whole future output of Middle Eastern oil between them. William Engdahl geopolitical expert highlighted Britain’s imperial ambitions: “rarely discussed, however is the fact that the strategic geopolitical objectives of Britain well before 1914 included not merely the crushing defeat of Germany, but, through the conquest of war, the securing of unchallenged British control over the precious resource which by 1919, had proved itself as a strategic raw material of future economic development – petroleum. This was part of the ‘great game’ – the creation of a new global empire, whose hegemony would be unchallenged for the rest of the century, a British – led new world order.”[7]

The Treaty of Versailles in 1919 officially ended World War I, after six months of negotiations Germany was required to accept full responsibility for causing the war and make reparations to certain members of the Allies. The sum of 132 billion gold marks with 6% interest was decided as a final settlement with Germany being offered a six day ultimatum to accept this final settlement. In his ‘The Economic Consequences of the Peace’, published in December 1919, British economist John Maynard Keynes predicted that the stiff war reparations and other harsh terms imposed on Germany would lead to the financial collapse of the country, which in turn would have serious economic and political repercussions on Europe and the world.[8] Within 20 years the world was at war again as Germany had conquered most of mainland Europe, again.

The Imploding of America’s Iraq