By Adnan Khan The eupho­ria that gripped Libya after the fall of Tripoli in August 2011 and the sub­se­quent death of Gaddafi two months later is now a dis­tant mem­ory. Ever since, Libya has been mired in chaos as mili­tia vio­lence stalks the land an strikes threaten to crip­ple the oil indus­try. Vio­lence has continued and eco­nomic stag­na­tion is every­where. Last October the Libyan Prime Min­is­ter Ali Zei­dan was kidnapped by regime security forces. After...
7th June 20147 min 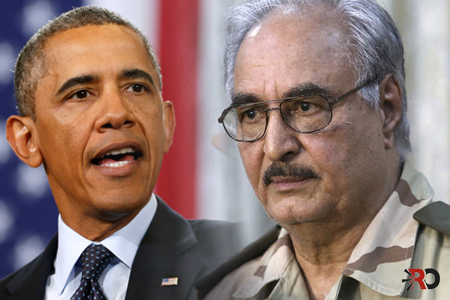 The eupho­ria that gripped Libya after the fall of Tripoli in August 2011 and the sub­se­quent death of Gaddafi two months later is now a dis­tant mem­ory. Ever since, Libya has been mired in chaos as mili­tia vio­lence stalks the land an strikes threaten to crip­ple the oil indus­try. Vio­lence has continued and eco­nomic stag­na­tion is every­where. Last October the Libyan Prime Min­is­ter Ali Zei­dan was kidnapped by regime security forces. After a tense stand-off he was eventually released.[1] The col­lapse of the Gaddafi regime cre­ated a polit­i­cal vac­uum which both Britain and the US have attempted to fill. The political situation in Libya is very volatile as both the US and Britain are backing different factions, which has caused a fracture in the country and this can be seen from four perspectives.

Firstly, successive US administrations attempted for many decades to gain influence in Libya, but Muammar Gaddafi, who took power in a coup in 1969 thwarted every attempt. Britain identified Gaddafi at Sandhurst and then nurtured and protected him for decades.[2] In return Gaddafi supported British interests throughout Africa by funding and arming various groups to maintain British interests. The US was however able to isolate Gaddafi from playing any regional role after the Lockerbie disaster in 1998, which killed 243 people. After 9/11 the Neocon government in the US called for regime change in Libya but Britain frustrated US plans by rescuing Gaddafi’s government.[3] British Prime Minister Tony Blair helped engineer Libya’s rehabilitation by getting Gaddafi to accept Libya’s role in the Lockerbie disaster and agree to pay compensation to the victim’s families, thus thwarting American plans to overthrow him.[4]

Secondly, as the Arab spring erupted and forced the removal of Hosni Mubarak and Ben Ali, the British establishment, sensing the end was near for Gaddafi, decided to abandon him. Britain’s Foreign Minister William Hague announced that the UK was looking to a post-Gaddafi era, but Gaddafi decided to fight his masters.[5] Britain then mobilized a coalition of the willing (primary the West) and the UN to forcibly  to remove him from power. Britain armed and supported various tribes and militia groups from the East of Libya to march West to the capital Tripoli to overthrow Gaddafi and his regime. After Gaddafi’s fall in 2011, these tribes and militia groups came to dominate Libya’s largest cities, filling the security vacuum left by the collapse of the old regime. Britain with France created the new political leadership in Tripoli. It established the National Transitional Council (NTC) in February 2011, but this temporary government was mainly composed of people from the former Gaddafi regime. Muhammed Jibril, the leader of the NTC, was the head of the Economic board under Gaddafi while the Chairman, Mustafah Abdul Jalil, was a judge under Gaddafi. Then in July 2012 a permanent government was established – the General National Congress (GNC), with Muhammed Jibril as its head. Britain successfully replaced Gaddafi with another set of cronies.

Thirdly, America immediately got involved in regime change and the overthrow of Gaddafi, as it sensed both Britain and France would be unable to carry out the military operation themselves. So the US deployed its resources to overthrow Gaddafi in order to have a role in post-Gaddafi Libya.[6] The US tried to influ­ence affairs in Libya to serve its own inter­ests by mak­ing pri­vate con­tacts with var­i­ous local tribes and cer­tain mili­tias through its con­sulate in Beng­hazi. The tes­ti­mony of Char­lene Lamb, Deputy Assis­tant Sec­re­tary of State, before the House Over­sight Com­mit­tee on the secu­rity fail­ures in Beng­hazi after the consulate was attacked and destroyed, on Octo­ber 10th 2012, revealed the US position. The hear­ing con­firmed there was no real ‘con­sulate’ in Beng­hazi, but a vast intel­li­gence and pri­vate con­trac­tors web for the CIA and the oil com­pa­nies. Ms. Lamb gave away the fact that the ‘facil­ity’ in Beng­hazi was not a diplo­matic facil­ity and con­firmed that “there were also three mem­bers of the Libyan 17th Feb­ru­ary [Mar­tyrs] Brigade” in the ‘con­sulate.”[7] When the US consulate was destroyed the GNC was unaware of the level of US pres­ence within the coun­try. The Deputy Prime Min­is­ter, Mustafa Abushagour, was quoted in the Wall Street Jour­nal say­ing that he learned about some of the del­i­cate Amer­i­can oper­a­tions in Beng­hazi only after the attack on the mis­sion, in large part because a sur­pris­ingly large num­ber of Amer­i­cans showed up at the Beng­hazi air­port to be evacuated. The Wall street jour­nal arti­cle con­tin­ued “among the more than two dozen Amer­i­can per­son­nel evac­u­ated from the city after the assault on the Amer­i­can mis­sion and a nearby annex were about a dozen C.I.A. oper­a­tives and con­trac­tors, who played a cru­cial role in con­duct­ing sur­veil­lance and col­lect­ing infor­ma­tion on an array of armed mil­i­tant groups in and around the city.”[8]

Fourthly, with new elections due on June 25 2014, America made its latest move with the emergence of former Major General Khalifa Hiftar. Hifter and his forces attacked the capital Tripoli and the parliament. It also launched an operation against the February 17 Martyr’s Brigade, which is considered one of the biggest and best-armed militias in Libya. Hifter has since been consolidating his position and his forces through alliances, particularly with some of the country’s air force, utilizing planes and helicopters in his attempt to establish a presence in Benghazi. The Zintan’s militias have now also aligned with Hiftar and so in a very short time his power has grown. Khalifa Hifter was a senior army official who supported the overthrow of King Idris in 1969 that brought Gaddafi to power. Hifter subsequently fell out with Gaddafi over a failed operation in Chad in 1986, where he and his men were captured and jailed. Gaddafi disowned him and his forces to the Chadian authorities. In 1990 America’s CIA negotiated his release and subsequently Hifter spent the next 20 years in Virginia, USA, where he was trained in guerilla warfare by the CIA. The Business Insider reported: “The likelihood that Hifter was brought in to be some kind of asset is pretty high. Just as figures like Ahmed Chalabi were cultivated for a post-Saddam Iraq, Hifter may have played a similar role as American intelligence prepared for a chance in Libya.”[9]

Hifters sudden rise has been due to his years of training and support from the US. The US faced a major setback when its embassy in Benghazi was attacked and its ambassador killed. The biggest challenge for the US is the fact that Britain has the most influence over the political leadership in Libya and each competing side has militia groups that can defend and maintain their influence. Ever since Gaddafi was overthrown numerous coup attempts have taken place, since the recent attempt by Khalifa Hifter, because no one group of militias has been powerful enough to establish complete control. But Hifter has managed so far to pull off a coalition linking some eastern militias with some western ones, something that has not been achieved yet. For the moment the situation in Libya is too unstable to say if the US will be successful, but it has now made progress in its competition with Britain.