In Part 2 of this series on the history of Iran-US relations, America’s emergence in the Middle East and the impact on Iran is analysed. By Idrees Devries After World War II the British tried hard to maintain their control over the Iranian oil industry through the Anglo-Persian oil company (later British Petroleum). Anglo-Persian controlled the production, refining and marketing of Iranian oil. From 1945 to 1950 this earned it over £250 million. Over the...
14th March 20146 min 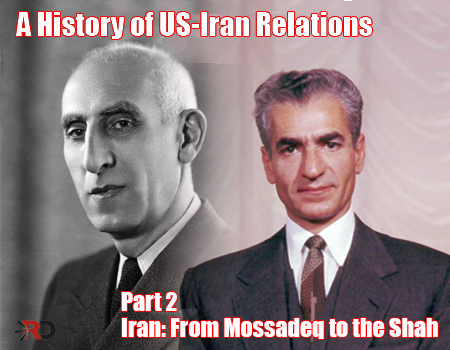 In Part 2 of this series on the history of Iran-US relations, America’s emergence in the Middle East and the impact on Iran is analysed.

After World War II the British tried hard to maintain their control over the Iranian oil industry through the Anglo-Persian oil company (later British Petroleum). Anglo-Persian controlled the production, refining and marketing of Iranian oil. From 1945 to 1950 this earned it over £250 million. Over the same period Iran made just £90 million on its oil, even less than what the British government made from taxes on Anglo-Persian.[1] Because of the Iranian oil, but also because of the influence that could be projected over the Middle East from Iran, both the Soviet Union and America worked to take over the “Persian Prize” from Great-Britain.

The Americans had a number of CIA agents stationed in Iran who worked to find potential agents amongst the Iranian political and financial elite. On behalf of the CIA a certain Dr. Taqi Nasr approached crown prince Abdoreza and General Ali Razmara. The latter gave the impression he was willing to work with the Americans to further his own career. Razmara told Dr. Taqi Nasr that if the Americans would support him to become prime-minister of Iran, he would make Dr. Nasr minister of economy, start an anti-corruption campaign to British agents from influential circles in Iran, and break the Anglo-Persian monopoly. In 1950 Washington ordered its ambassador in Iran John C. Wiley to “urge” the Shah to appoint general Razmara as prime-minister. The Shah heeded the advice. [2]

Following his appointment as prime-minister general Razmara indeed implemented far reaching reforms. He fired some 400 high-placed civil servants and signed the “Point Four” agreement with America, which enabled the Americans to buy influence in Iran under the guise of economic support. In the matter of Anglo-Persian, however, Razmara did not do as the American wanted and expected from him. He signed an agreement with Anglo-Persian which legitimized the latter’s control over Iranian oil. Shortly after this, Razmara was murdered. [3]

The Majlis, where Colonal Schwarzkopf was so influential, then pressured the Shah to appoint Mohammed Mossadeq in place of Razmara. Until 1919 Mossadeq had been a very important Iranian politician. Because he was against the British influence in Iran, he was forced to leave the country in that year. In 1921 the British through Reza Khan invited him back to the country, with the aim of utilizing his influence to solidify Khan’s position. Mossadeq accepted the invitation to return to Iranian politics, but when Khan crowned himself Shah in 1925 he argued so strongly against this move that again he was sidelined.[4] Mossadeq hated the British Empire because of this, which attracted the Americans towards him. America saw Mossadeq as someone who could help them remove the British influence in Iran, so they kept an eye on him. In 1944 the American consul in Tehran reported back home that Mossadeq was “a very popular man in Iran, and his words carry a great deal of weight”. [5]

Indeed Mossadeq’s first deed after being appointed prime-minister was to nationalize the Iranian oil industry. The British were absolutely furious and developed a plan to have its military invade Iran just as in 1918. When they approached the Americans with this plan to get their endorsement, however, the Americans refused and flatly told the British they would not tolerate any military moves against Iran. America took Mossadeq’s side and forced the British to enter negotiations. This the British refused. Instead, through the United Nations Britain organized a global embargo on Iranian oil and it instructed its agents on the ground in Iran to organize a military coup against Mossadeq. America was displeased with the British initiatives. The oil embargo upset the global oil markets. There was a concern in Washington also that the Soviet Union might try to make use of the instability caused by a military take-over and launch a counter-coup to establish a communist regime in Iran. America’s ability to go against Britain was limited, however, as it needed British support in the Cold War against communism, especially in the Korean Peninsula were America was fighting a war at the time. Therefore, America began to put pressure on Mossadeq. It wanted him to make a deal with the British Empire. Mossadeq, however, refused to compromise and in discussions with the British refused to give in on critical subjects. Some within the American administration saw this as betrayal and suspected Mossadeq of working with the Iranian communists. The CIA was therefore ordered to organize a coup against Mossadeq. In 1953 the CIA operation “Ajax” was executed and Mossadeq was removed from power.[6]

Operation Ajax returned Shah Mohammed Reza Pahlavi to power. He knew who he had to thank for his position. It is said that in front of Kermit Roosevelt Jr, head of the CIA in Iran, he remarked that he realized he owned his thrown “to God, my people, my army – and you”. [7] The return of the Shah saw an increase in the American influence in Iran.

The CIA organized for the Shah a new internal security organization named SAVAK. Colonel Schwarzkopf returned to Iran in 1955 to take responsibility for this operation. [8] America also supported the Shah financially. It gave him $68 million following his return to power, approximately one-third of the oil revenues the Iranian state had missed out on due to the British embargo. During the remainder of the 1950’s America would lend the Shah a further $300 million for economic development, and $600 million to equip his army. [9]

All this firmly established the Shah in his position, to the point that he began dreaming of a future independent from America. His policies began focusing on turning Iran into a regional power, willing to compete with America for influence in the greater Middle East, and he began spending large amounts of money to build the strongest army in his region. America did not like this as it threatened to upset the regional balance of power, which could push Saudi-Arabia back into the hands of the British.

When the Shah also began threatening America, his fate was sealed. In an interview with US News and World Magazine in 1976 the Shah said about America’s power and influence in Iran: “But if you try to take an unfriendly attitude toward my country, we can hurt you as badly if not more so than you can hurt us. Not just through oil – we can create trouble for you in the region. If you force us to change our friendly attitude, the repercussions will be immeasurable.” [10] America was furious and decided to remove the Shah from power.

In part 3 the impact of the emergence of Ayatollah Khomeini and the ‘Islamic revolution,’ on US-Iran relations will be analysed

10] “Warning to America: ‘A False sense of Security will destroy you’ (Exclusive Interview With The Shah of Iran)”, U.S. New World Report, 1976

Why the F-16 Matters