This 6 part RO series will analyse the key developments as the Syrian uprising reaches 3 years. The series will analyse the evolving western strategy, the strength of al-Assad’s military forces, the ISIL and the emerging likely trends. Part 1 looks at why the rebel groups failed to capitalise on their initial success. By Adnan Khan When the uprising in Syria began 3 years ago, the small country at the heart of the Middle East was notably...
12th March 20145 min 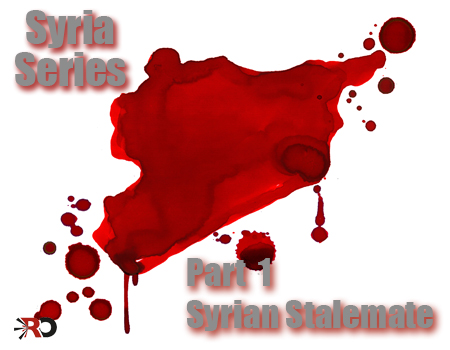 When the uprising in Syria began 3 years ago, the small country at the heart of the Middle East was notably different. Whilst the other uprisings in the region lost their initial momentum the people of Syria stood tall in the face of indiscriminate air attacks and artillery fire. The initial success the rebel groups made gave way to a protracted struggle against regime forces and the balance of power in the country is today evenly balanced. Whilst the rebel groups control the North of the country the regime controls the country’s heartland from Damascus to the mediterranean coast. The rebels control more territory than the regime but the regime continues to maintain its grip on key territory. There are a number of reasons why the rebels struggled to capitalise upon their initial success, these can be encapsulated into 4 fundamental reasons.

Firstly, many rebel groups are small and do not deploy away from their home provinces. Throughout 2013, the exceptions were groups in large rebel coalitions, such as Suqur al-Sham and the Tawhid Brigades part of the Syrian Islamic Liberation Front (SILF) and Ahrar al-Sham and the Al-Haqq brigade in the Syrian Islamic Front (SIF). These coalitions have since merged with other groups, but the groups continue to organize and lead attacks involving multiple rebel groups under the banner of the Islamic Front. Rebel groups have continued to fight the regime under multiple umbrellas rather than unifying or merging into a cohesive whole, which could then challenge the al-Assad regime. The effect of this has been that results have been local rather than national. The successes in the north of Syria has been partly due to the regime giving up the region as it struggled to deal with a nationwide insurgency which was stretching it across the country.

Secondly, the rebel groups lack a national-level command and control system and have relied on a decentralized system which created multiple centres of gravity for the opposition. This  diversified the risk of a systemic collapse by rebel groups when the regime attacked on any given front. This structure undermined al-Assad’s firepower as the army could not fight every rebel group simultaneously across the length and breadth of the country. With the regime giving up on the north of the country, al-Assad’s forces fell back to the country’s heartland from Damascus to Latakia and have focussed on rooting out rebels rather than engaging in offensive operations. Launching an operation on the heartland or the seat of the regime will need a sustained assault from multiple directions by the rebels and this needs coordination and planning as well as the amalgamation of most of the rebel groups. Whilst attempts have been made to shift to this more conventional structure, rebel infighting, which escalated in January 2014, is now diminishing the advantages gained from the original dispersed structure.

Thirdly, rebel discord has resulted in rebel infighting which is now taking up more resources than fighting the regime. The rebel discord has fundamentally been due to the actions of the ISIS. Their actions have led some rebel groups to turn against them. The ISIS has focused its effort on carving out territory for itself in north-eastern Syria, which is not aligned with the opposition’s goal to defeat al-Assad’s military. These distinct opposition campaigns are now much more prominent and have impacted attempts at leading a coordinated assault on Damascus, the seat of the regime. Throughout the summer of 2013, ISIS established areas of control in key terrains in northern and eastern Syria along the Turkish border, with a significant presence in towns such as Atmeh, al-Bab, Azaz, Manbij, and Jarablus. ISIS persecution has included the abduc­tion, tor­ture, and killing of the Ahrar al-Sham mem­ber Dr. Hus­sein al-Suleiman (Abu Rayyan), whose muti­lated body was found on Jan­u­ary 1st 2014.[1] ISIS is composed of fighters, who should be on the front lines facing-off against the regime, but many remain in rebel held territory running checkpoints, acting as judges and distributing resources. Rather than elect people from amongst the indigenous population, those best experienced in fighting are governing over people, and as a result maintaining cohesion has been through the gun.

Fourthly, the external support provided to the al-Assad regime has allowed it to maintain its position despite the loss of territory and mass defections from its armed forces. The West led by the US has provided the regime cover through creating a façade of doing something when in reality they stood by when al-Assad launched a chemical attack on his people. The West has been organising conferences and summits to establish a national coalition who will negotiate a transition deal with the regime. Defected official Brigadier General Zaher al-Saket confirmed the al-Assad regime was on the verge of collapse, this is what led to the intervention of Iran and thousands of fighters from Hizbullah.[2] Iran propped up the al-Assad regime by providing weapons and deploying its revolutionary guards. The Muslim rulers in the region also contributed by allowing their territories to be used for shipping arms to the right groups and ensuring arms did not end up in the hands of those calling for Islamic change.

The rebel groups have managed to hold the more capable and equipped regime military forces to a stalemate. One of the main challenges standing in the way of the rebel groups is the US strategy of maintaining the status quo. The US has however failed in cultivating a loyal opposition in order to achieve this. The biggest threat is now is the growing friction amongst the rebel groups. This trend has serious implications as ISIS has rejected almost all talks and more and more rebel resources will need to be dedicated to them at the expense of the regime.

A History of Iran-US Relations

Iran: From Mossadeq to the Shah