By Adnan Khan   Iranian Adm. Afshin Rezayee Haddad announced February 8 2014 that an Iranian frigate had been dispatched to the North Atlantic Ocean, where it will approach US maritime borders.[1] Whilst this is not the first time Iran has announced its intent to deploy naval vessels close to the US, on this occasion the vessel was already approaching the South Atlantic Ocean through waters off the coast of South Africa.[2] The navy...
13th February 20146 min 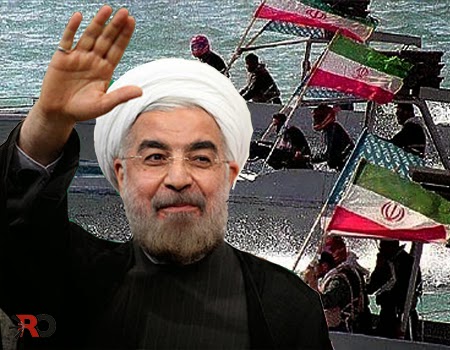 By Adnan Khan
Iranian Adm. Afshin Rezayee Haddad announced February 8 2014 that an Iranian frigate had been dispatched to the North Atlantic Ocean, where it will approach US maritime borders.[1] Whilst this is not the first time Iran has announced its intent to deploy naval vessels close to the US, on this occasion the vessel was already approaching the South Atlantic Ocean through waters off the coast of South Africa.[2] The navy operation takes place at a politically sensitive moment as the US and Iran are in talks to normalize relations. Iran’s decision to deploy navy vessels is completely symbolic and is to appease elements within the regime, who are against normalizing relations with the US. Iran lacks the military capability to project power beyond the Middle East, and despite its constant anti-US rhetoric such maneuvers will not derail the normalization of Iran-US ties.
Iran’s navy is currently only equipped for short-range, asymmetric warfare (unconventional war) with numerous small, short-range vessels, but has relatively few vessels capable of long-range deployments. For the last two decades the regular Iranian navy has been in a state of overall obsolescence and in poor shape because they have not been equipped with modern ships and weapons. The readiness of navy’s three frigates is doubtful, and the two nearly 40-year-old corvettes do not have sophisticated weapons.[3] As a result Iran’s blue-water (non-coastal) capabilities are extremely limited. Its warships themselves must be accompanied by a specialist ship when venturing as far as the  Atlantic. The other craft the Iranians use to project naval force is a replenishment vessel that provides fuel, food, fresh water and ammunition for extended deployments. This vessel is the Kharg, an aging Ol-class design built in the UK in the late 1970s and delivered to Iran in 1984. [4] Without this vessel, the small number of Iranian frigates would be unable to embark on extended deployments without consistent and frequent port visits along the way, a method that the Iranians cannot rely on for a mission to the Atlantic.
Iran as a nation is reliant upon its missiles and irregular forces to defend the nations from any foreign threat. Its conventional forces are poorly trained and poorly equipped and are qualitatively outmatched by its irregular forces. Iran’s ground forces are equipped with battle tanks from the Soviet Union and their serviceability is in doubt. Likewise, Iran’s air force is extremely weak, lacking in both offensive and defensive capability. Iran’s combat capability consists largely of Soviet Su 24’s from the 1970’s, while the rest is made up of American F-14 Tomcat’s from the 1970’s and McDonnell Douglas F-4 Phantoms from the 1960’s. Iran’s air defence forces are the weakest link in the overall defence posture. Overall Iran continues to maintain its very old and aging equipment, and even the best of Iran’s platforms have limited capabilities relative to almost any comparable US platform, in terms of weapons range, speed, countermeasures and detection range.
Iran compensated its inability to modernize its conventional forces by building up its asymmetric capabilities. The Islamic Revolutionary Guards Corps, comprising around 125,000 men is Iran’s ace card. The IRGC consists of ground, naval, and aviation troops, which parallel the structure of the regular military. Iran’s ability to project power internationally and maintain domestic stability rests with this elite military institution and as a result it is the most influential institution in the Iranian political system. Its importance can be seen from the fact the IRGC air force operates Iran’s ballistic missile forces. The IRGC Navy is dominated by small patrol and fast attack missile boats that are ideally suited for operations in and along the Persian Gulf. Iran’s military strategy rests on avoiding state-on-state warfare. Due to this strategy Iran has neglected and struggled to modernise is conventional forces. The costs involved are too high for Iran’s economy and budget to bear and as a result investment has all been in its asymmetric capabilities.
When Iran’s anti-US saber-rattling is placed in perspective, Iran’s ambitions remain restricted to its region. Its lack of offensive capabilities restrict its role beyond the region. Iran has worked to expand its influence throughout the Middle East and developed a host of political plans to achieve this. Iran established Hizbullah in Lebanon in the early 1980’s and continues to extend its support through training and arms. Similarly in Palestine the Iranian regime has armed Hamas and the Islamic Jihad. The clerical regime has deepened relations with the Alawite regime in Syria and also made itself the official representatives of the Shi’ah globally, and has used this as a pretext to interfere in countries with significant Shi’ah populations. For Iran, normalising ties with the US will give it the influence it so craves in the region.
Iran’s navy sailing across the world’s oceans is only meant to instill national pride in the country. Iran has regularly boasted about its military superiority and exaggerated its capabilities, not just to deter its foreign enemies but also for domestic propaganda purposes. Iranian ships so close to America’s waters achieves this and will succeed in dealing with hardliners within the regime who constantly berate the presence of US ships in the Persian Gulf. This is why this deployment will be more effective in creating national prestige rather than pose a threat to the US. The reality is Iran could have bled the US to death when it was marred in insurgency in both Iraq and Afghanistan, but in both cases it came to America’s aid by supporting America’s political architecture in these countries. Iran’s ships sailing so far from Iranian waters are in reality at their most vulnerable in the open waters of the Atlantic, as its 3 frigates do not come close to competing with America’s 22 cruisers, 62 destroyers and 17 frigates.
[1] http://www.bbc.co.uk/news/world-middle-east-26105749
[2] http://www.jpost.com/Iranian-Threat/News/Iranian-admiral-The-US-can-expect-heavy-losses-at-sea-should-it-attack-Iran-340940
[3] http://www.globalsecurity.org/military/world/iran/navy.htm
[4] http://www.probertencyclopaedia.com/cgi-bin/res.pl?keyword=Kharg&offset=0

Beasts of the Seas - Aircraft Carriers