By Ali Harfouch & Adnan Khan  As the world’s powers and some Syrian rebel groups gather for the Geneva 2 talks, the Syrian revolution over recent months has witnessed an increase in rebel infighting. The progress of Jabhat an-Nusra and the Islamic State of Iraq and Sham (the Levant), or ISIS, has received global attention as they conducted a number of daring raids, making significant contributions in the rebels’ successes against Assad’s forces. The...
15th January 20146 min 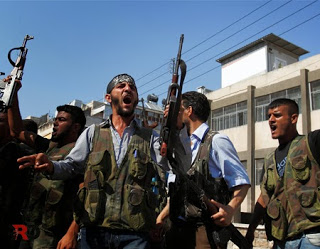 By Ali Harfouch & Adnan Khan
As the world’s powers and some Syrian rebel groups gather for the Geneva 2 talks, the Syrian revolution over recent months has witnessed an increase in rebel infighting. The progress of Jabhat an-Nusra and the Islamic State of Iraq and Sham (the Levant), or ISIS, has received global attention as they conducted a number of daring raids, making significant contributions in the rebels’ successes against Assad’s forces. The situation is changing rapidly in northern Syria as rebel fighters launched widespread attacks against ISIS in dozens of locations in Idlib and Aleppo provinces after ISIS stormed the town of Atareb in Aleppo. This led to widespread protests across Syria against ISIS, which in turn led to violent clashes across northeastern Syria.[1] Whilst tensions do exist between some rebel groups, this trend represents an ominous moment in the uprising that has the potential to derail two years of progress. The reasons for this can be encapsulated into four fundamental issues.
Firstly, at the heart of the rift is Jabhat an-Nusra’s takeover by the group it originated from, the Islamic State of Iraq (ISI), led by Abu Bakr al-Baghdadi. This organization became the Islamic State of Iraq and Sham (the Levant), or ISIS after this takeover. The announcement sent shockwaves across Syria and the region, but more so, amongst the leadership and rank-and-file within Jabhat an-Nusra. Within days, Abu Muhammad al-Joulani, the head of Jabhat an-Nusra rejected the proposal and ‘reaffirmed’ his allegiance to Ayman Al-Zawahiri, who for Joulani, represented the global Jihad whereas Baghdadi represented the cause in Iraq.[2] As a result fighters from Iraq moved into the Syrian theatre and began taking over territory Jabhat an-Nusra controlled and was governing. Matters reached boiling point in early January 2014 when Jabhat al-Nusra took over ISIS’ position in Atmeh in northern Syria in conjunction with Ahrar al-Sham.
Secondly, some rebel factions are divided in their vision, with some of key ideologues calling for an insurrection against the “close enemies” – the regime in Damascus, while others are calling for the targeting of those who are allying with the enemy and the global powers. For example: a new Jabhat al-Nusra recruit said in an interview with AFP that, “Al-Nusra is fighting to bring down the regime, while ISIS fights to bring down the Free Syrian Army (FSA).”[3] Accordingly, different strategies have been employed by different movements all of which operate without an overarching framework held together by a coherent vision. The merger of rebel forces in November 2013 into the Islamic Front was an attempt to overcome this division by pooling resources, and not just jointly conducting attacks.[4]
Thirdly, since the announcement of ISIS, its actions in Syria have only created more enemies and opposition against them, including the indigenous people of Syria. The rebel groups who fought the regime in the north of the country were already struggling with governance related issues, which included distributing resources, energy, wheat and operating courts. In addition to ISIS incursion into Atareb, citizens and rebel fighters have been increasingly upset over ISIS persecution in northern Syria. One of the most recent incidents includes the abduction, torture, and killing of the Ahrar al-Sham member Dr. Hussein al-Suleiman (aka Abu Rayyan), whose mutilated body was found on January 1st.[5] The ensuing protests in at least one village resulted in ISIS opening fire on unarmed protesters.[6]  Violent confrontations between Ahrar al-Sham and ISIS have been a regular feature in northern Syria for the last two months. The clashes of the past two weeks have witnessed the most intense and widespread clashes between ISIS and other revolutionary fronts.
Fourthly, as can be interpreted from the group’s name, be it the ‘Islamic State of Iraq’ or the ‘Islamic State of Iraq and Sham (Levant)’, this group views itself as a political entity who is ruling over its territories. For ISIS, implementing Islam includes their understanding of the creed and as a result many have been accused of apostasy for taking different positions to them. Based on this, courts have been set up and any opposition to ISIS rule or verdicts has been viewed as rebellion and has seen individuals and groups punished with execution. With ISIS controlling a number of checkpoints leading into Turkey, many residents have complained of paying multiple tariffs to just shop for basic staple foods.  ISIS is composed of fighters, who should be on the front lines facing-off against the regime, but many remain in rebel held territory running checkpoints, acting as judges and distributing resources. Rather than elect people from amongst the indigenous population, those best experienced in fighting are governing over the people and as a result maintaining cohesion has been through the gun.
Although there have been clashes and disputes between ISIS and other rebel groups before in Syria, the scale of what is happening right now is unprecedented. This is the first time the Syrian uprising is seeing more resources dedicated to infighting than fighting the regime. This takes place as the West struggles to bring together a ‘credible’ element of the opposition in its solution to Syria. The rebels have not launched a major offensive against Damascus for some time (since the Qalamoun offensive two months ago),  and even the al-Assad regime has sat back and watched the rebels fight amongst themselves. The people of Syria have sacrificed much in the face of a regime who believes all forms of torture and weapons (including chemical weapons) are fair game to thwart the uprising. If the rebel groups continue down this road, the Syrian people may eventually decide negotiating with the Assad regime is the lesser of two evils.
[1] http://syriafreedomforever.wordpress.com/2014/01/03/protests-against-isis-january-3-2014/
[2] http://www.telegraph.co.uk/news/worldnews/middleeast/syria/10067318/Syria-Jabhat-al-Nusra-split-after-leaders-pledge-of-support-for-al-Qaeda.html
[3] http://www.stratfor.com/analysis/syria-infighting-grows-among-rebels
[4] http://iswsyria.blogspot.co.uk/2013/11/a-power-move-by-syrias-rebel-forces.html
[5] http://www.dailystar.com.lb/News/Middle-East/2014/Jan-03/242966-isis-condemned-for-brutal-murder-of-fellow-jihadist.ashx#axzz2q6RkdTxZ
[6] http://www.youtube.com/watch?v=RysoFaEpROk

The Arab Spring and Syria: 3 Years on