This is part 4 of RO’s Arab Spring anniversary series. Part 1 looked at Libya. Part 2 analysed Tunisia. Part 3 looked at Yemen. In this 4th installment we assess where the uprising stands in Egypt. By Adnan Khan The fall of long-standing president Hosni Mubarak in early 2011 sent shockwaves around the world and gave considerable fuel to the uprisings in the region as many rose up to change the status quo. The...
4th January 20148 min 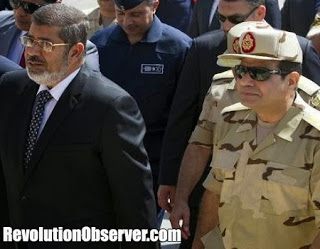 This is part 4 of RO’s Arab Spring anniversary series. Part 1 looked at Libya. Part 2 analysed Tunisia. Part 3 looked at Yemen. In this 4th installment we assess where the uprising stands in Egypt.
By Adnan Khan
The fall of long-standing president Hosni Mubarak in early 2011 sent shockwaves around the world and gave considerable fuel to the uprisings in the region as many rose up to change the status quo. The Muslim Brotherhood (MB),  long marginalised by successive rulers, dominated post-Mubarak Egypt by initially winning a landslide victory in the parliamentary election in early 2012 and then the presidential election in June 2012. Exactly one year after his presidential victory, President Muhammad Morsi’s Republican Guards simply stepped away as army commandos came to take Morsi to an undisclosed Defense Ministry facility.[1] This concluded the short lived rule of the MB, with the army coup completely reversing the gains made during the Arab Spring. Three years on, the uprising in Egypt has gone horribly wrong.
There are four main reasons for this:
Firstly, despite the elections that took place, the Egyptian army never really gave up power. Morsi and the MB never had any plans to change this reality. The army was always heavily involved in the national economy; according to some estimates as much as 40% of the Egyptian economy is and was controlled by the military. [2] The military maintained its interests and influence in the industrial and service sectors; including weapons, electronics, consumer products, infrastructure development, agribusinesses, aviation, tourism and security. [3] Muhammad Morsi and the MB were powerless as General Abdul Fatah al-Sisi announced the removal of the democratically elected government. Over 300 MB officials were rounded up overnight and placed under arrest. [4] The military had collaborated with the opposition, secular elements, Coptic Christians, as well as the leadership of Al-Azhar on the post MB setup. [5] The army proved, if there were any doubts, that it was the dominant power-broker in the country, despite the elected government’s win at the polls.
The rule of the MB was extremely weak and can only be described as lacking in authority and rife in incompetence. Throughout Morsi’s one year rule, the domestic political scene was never stable and was worsened by the confusion brought about by the Morsi government, over decision-making. Morsi made many random and arbitrary decisions without any consultation with others, including his own appointed advisors, only to retract many of his decisions under pressure. None of the government policies were tested on the street and Morsi failed to convince the public of his policies. Morsi’s rule was characterised with anarchy; and this instability continued throughout his year in office, which led to the emergence of a growing opposition that challenged his rule. The Morsi government inherited an economy which was already on the verge of collapse. The lack of a clear economic roadmap merely exacerbated the economic situation.
The US maintained its influence in Egypt: something the MB did nothing to change. The US historically showered the Egyptian military with aid in excess of $30 billion since the 1970’s in return for safeguarding US interests. [6]  This was something Egypt’s successive leaders had been more than happy to implement. As soon as Morsi became President, he confirmed that he would respect all prior treaties. [7] The US set about strengthening his rule by defending him, as opposition against him grew. [8] However, Morsi spectacularly failed in maintaining domestic political stability, which the US needed in order for Egypt to play a role in the wider region. The MB and Morsi failed at this and matters only worsened the longer he remained in office. By June 2013, US officials began to openly criticise the Morsi government despite defending him against the mass protests in the streets only months before. Obama reiterated “the current crisis can only be resolved through a political process.” [9] The US was telling the MB to respond to the demands of the demonstrators who were demanding the overthrow of the President! Obama approved of the coup by not condemning it. Secretary of State John Kerry confirmed the return of the military regime as: “restoring democracy.” [10]
The Egyptian military under Sisi has worked to completely destroy the MB and every possible threat to their power in order to maintain the military’s role in the country. Soldiers and police opened fire on thousands of Morsi supporters that gathered in Cairo in numerous protests. Hundreds of people were killed in what Human Rights Watch described as “the most serious incident of mass unlawful killings in modern Egyptian history.” [11] Throughout August 2013, MB members camped out for days in front of the Rabaa mosque in Cairo, protesting the military’s ouster of Morsi. On August 14 2013, wearing riot gear and driving armored vehicles and bulldozers, the security forces moved in, killing at least 600 people and wounding thousands more. The attack, aided by snipers, lasted for more than 12 hours. [12] Following this, the interim president returned Egypt to martial law. [13] If that wasn’t enough, an Egyptian court released Hosni Mubarak from prison too. [14] A Kangaroo court was set up where Morsi and other MB members stood trial for “committing acts of violence and inciting killing and thuggery.” [15] On December 25 2013, Egypt’s military-backed government designated the MB a terrorist organization, criminalizing its activities and finances. [16]
At every juncture the Egyptian military ensured that its  interests were never harmed and did everything to maintain the status quo. The military formed a coalition of convenience with the MB for much of 2011 and 2012 to manage the post-Mubarak landscape and hold revolutionary aspirations and unfettered popular mobilizations in check. It successfully co-opted the movement against Morsi and, along with the security establishment, emerged as the clearest winner from his overthrow. Despite the sacrifices of many who took to the streets to initiate real change, on the third anniversary of Mubarak’s overthrow, Egypt has come back full circle to the eve of Mubarak’s otherthrow.
Part 1 – Libya
Part 2 – Tunisia
Part 3 – Yemen
[1] http://www.theguardian.com/world/2013/jul/05/morsi-final-days-egypt-president
[2] http://www.nybooks.com/articles/archives/2011/aug/18/egypt-who-calls-shots/
[3] http://www.jadaliyya.com/pages/index/3732/
[4] http://www.dailymail.co.uk/news/article-2354953/Egypt-celebrates-arrest-Muslim-Brotherhood-leader-army-hunts-300-Morsi-followers.html
[5] http://www.themalaysianinsider.com/world/article/egypt-orders-arrest-of-300-islamists
[6] http://news.nationalgeographic.com/news/2013/07/130705-egypt-morsi-government-overthrow-military-revolution-independence-history/
[7] http://www.telegraph.co.uk/news/worldnews/africaandindianocean/egypt/9504601/Mohammed-Morsi-vows-to-respect-Egypt-Israel-peace-treaty.html
[8] http://www.nationalreview.com/corner/334237/state-department-morsi-far-cry-autocrat-patrick-brennan
[9] http://news.sky.com/story/1110718/egypt-seven-dead-as-army-deadline-looms
[10] http://www.bbc.co.uk/news/world-middle-east-23543744
[11] http://www.hrw.org/news/2013/08/19/egypt-security-forces-used-excessive-lethal-force
[12] http://www.huffingtonpost.com/2013/08/15/rabaa-al-adawiyah-photos-destroyed_n_3761648.html
[13] http://www.wsws.org/en/articles/2013/08/15/egyp-a15.html
[14] http://www.bbc.co.uk/news/world-middle-east-23792546
[15] http://www.reuters.com/article/2013/09/01/us-egypt-protests-mursi-idUSBRE9800EI20130901
[16] http://www.bbc.co.uk/news/world-middle-east-25515932
previous

Can Erdogan Survive the latest Scandal?