By Adnan Khan The Ukraine government’s announcement, on November 21, not to sign a partnership deal with the EU, despite years of negotiations aimed at integrating Ukraine into the EU, has led to a national crisis. Thousands of pro-EU Ukrainians poured onto the streets in protest. Protesters gathered on the streets of Kiev were eventually dealt with by riot police, this spurred greater protesters into the streets, which only fuelled anger as pictures beamed throughout...
19th December 20136 min 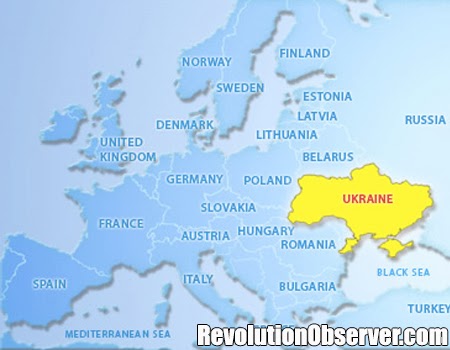 By Adnan Khan
The Ukraine government’s announcement, on November 21, not to sign a partnership deal with the EU, despite years of negotiations aimed at integrating Ukraine into the EU, has led to a national crisis. Thousands of pro-EU Ukrainians poured onto the streets in protest. Protesters gathered on the streets of Kiev were eventually dealt with by riot police, this spurred greater protesters into the streets, which only fuelled anger as pictures beamed throughout the country. An estimated 200,000 attended a rally on December 15,[1]which challenged the pro-Russian government led by President Viktor Yanukovych. Scenes reminiscent of theOrange revolution in 2004 have been seen once again where weeks of unrest lead to the annulling of elections and the emergence of pro-EU ruler. Is Ukraine on the cusp of another revolution? To explain this there are four issues that need to be understood.
Firstly, Ukraine has always been on the edge of empires, the name ‘Ukraine’ literally translates as ‘on the edge.’ 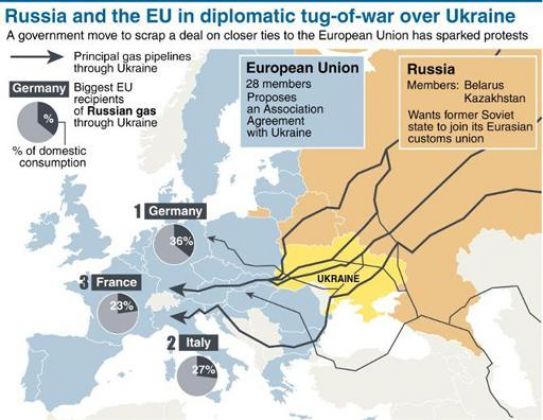 Throughout history it has been part of Russia, the Ottoman Caliphate and Poland. In its recent history Ukraine was the most important republic out of the 15 former member republics of the Soviet Union. Ukraine was one of the Unions largest republics and it remains the breadbasket of Russia. Ukraine’s proximity to Moscow led to the development of its energy resources and the construction of energy infrastructure and pipelines. Due to this Russia currently supplies 80% of Ukraine’s natural gas and most of Russia’s energy to Europe transits through Ukraine. This links Ukraine’s energy directly to Russia’s. Ukraine is crucial to Russia as its industrial, agricultural and energy sectors are integrated with Russia’s and it is a buffer between it and Europe. The loss of Ukraine would bring Europe right on its doorstep which would be an existential threat. This is why Russia interferes in the nation’s politics to ensure Pro-Russian leaders only emerge.

Secondly, after the fall of the Soviet Union, the West led by the US began working to push its boundaries in Europe rapidly eastward, destroying Russia’s ability to influence the region. The pro-Western lines moved to the east for the past two decades, via NATO and EU expansion, until they pushed hard up against Russia’s borders. With the collapse of the Soviet Union the US worked to dismantle the architecture established by the USSR, it worked to contain Russia by bringing all the former Soviet republics under its sphere of influence and for the next decade through economic aid it economically linked them to the West. Since the collapse of the Soviet Union the European Union has been expanding East and worked to bring all the former Soviet republics into the union. The EU was very successful at this as Russia was in internal chaos. With many former Soviet republics joining the EU the EU was able to establish a large pro-EU support base. It was this support base that overturned the electoral result in 2004 in the Orange Revolution. 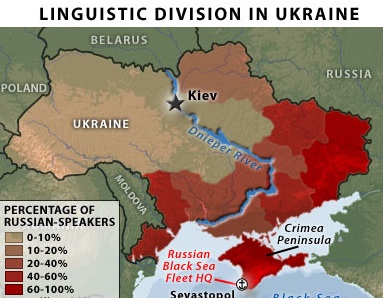 Thirdly, Ukraine’s current population contains a large Russian minority of 17%,[2] more than 30% of all Ukrainians
speak Russian as a native language[3] and more than half of the country belongs to the Ukrainian Orthodox Church under the Moscow patriarch. Ukrainians living in the east of the country and in the Crimean peninsula have ethnic ties with Russia as they are Slavic. This has polarized Ukraine into Pro-West and Pro Russia. The East and South contain ethnic Russians whilst central and West Ukraine is mainly nationalist who want independence from Russia. But Russia’s influence goes deep into the country as Ukraine gets more than 60% of its natural gas from Russia,[4] as a result Russia regularly manipulates the Ukrainian pipeline infrastructure by cutting off supplies to keep it within its orbit. It is this reality that constantly leads to tension in the country.
Fourthly, in November 2013 Ukrainian Prime Minister Mykola Azarov confirmed he requested €20 billion from the EU for financial assistance to shore up the nations finances due to its economy being in recession.[5] This request was turned down by EU officials and subsequently Ukraine rejected the EU association and free trade agreement. This rejection is what triggered large protests on the streets of Kiev. It was in this context after years of Ukrainian efforts to get lower natural gas prices from Russia, an agreement was reached Tuesday December 17, Ukraine secured a 33% discount on its natural gas supplies from $400 to $268 per thousand cubic meters. Moscow also agreed to buy $15 billion worth of Ukrainian debt,[6] something the EU refused to do. Russia has successfully maneuvered and taken advantage of the current unrest. With Ukraine refusing the EU integration this has brought Ukraine further into Russian influence.

Whilst protests have been growing in Ukraine they remain restricted to Western Ukraine who have traditionally been Pro-West. So far the main composition of the demonstrations has been younger, Western-oriented people. In fact most of the disturbances have been almost limited to young people and this is unlike the Orange Revolution, which brought out a broader segment of society, though certainly these are the largest demonstrations since the revolution. Similar to the Orange Revolution Western NGO’s and think tanks have been active once again with the opposition. Christin Ashton the EU’s foreign policy commissioner met with opposition leaders Tuesday December 18, as did US Assistant Secretary of State Victoria Nuland. Western institutions and groups were instrumental during the Orange Revolution as they provided financial support, organizational and political support, training for the civil and political leaders and propaganda. However it remains to be seen if the EU will be prepared to pour in resources as Russia has done since Ukraine is a strategic necessity for Russia.
[1]http://www.bbc.co.uk/news/world-europe-25390654
[2]http://2001.ukrcensus.gov.ua/eng/results/general/nationality/
[3]http://bd.fom.ru/report/map/ukrain/ukrain_eo/du091015
[4]http://www.reuters.com/article/2012/05/11/shell-chevron-ukraine-idUSL5E8GBAE020120511
[5]http://www.kyivpost.com/content/ukraine/azarov-ukraine-requesting-20-billion-from-eu-as-financial-aid-333429.html
[6]http://www.euractiv.com/general/geopolitical-realities-ukraine-r-analysis-532449
previous

Rise of the Red Dragon