On the third anniversary of the Arab spring RO analyses where the revolution currently stands. This 6 part series will analyse the five individual countries which witnessed great upheaval  which led to the overthrow of a number of dictatorial regimes. The first in the series will look at Libya and then analyse Tunisia, Yemen, Egypt and Syria. By Adnan Khan The kidnapping and eventual release of Libya’s Prime Minister Ali Zeidan on October 10th by...
15th November 20136 min 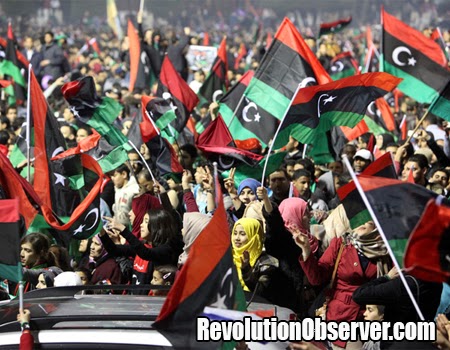 On the third anniversary of the Arab spring RO analyses where the revolution currently stands. This 6 part series will analyse the five individual countries which witnessed great upheaval  which led to the overthrow of a number of dictatorial regimes. The first in the series will look at Libya and then analyse Tunisia, Yemen, Egypt and Syria.

The kidnapping and eventual release of Libya’s Prime Minister Ali Zeidan on October 10th by regime security forces, thrust Libya back into the international spotlight.[1] The euphoria that gripped Libya after the fall of Tripoli in August 2011 and the subsequent death of Gaddafi two months later is now a distant memory. Libya is today mired in chaos, militia violence stalks the land, strikes threaten to cripple the oil industry, violence is on the rise in the East and economic stagnation is everywhere. There are a number of reasons why matters have descended into chaos in Libya – the four key reasons are analysed below.
Firstly, it took around 8 months for the rebels and various groups in Libya with significant NATO help to bring down the Gaddafi regime.  The war had been long and damaging, the wounds deep and what united all the rebel groups was their opposition to Gaddafi. There was never any plan, blueprint or roadmap of what they would do once the Gaddafi regime fell – this is understandable considering the grip Gaddafi maintained for decades. An unelected interim government, the National Transitional Council (NTC) issued a constitutional declaration, otherwise known as the Road Map, which envisioned a lengthy 18-month transition to something representative of the people. Stage one was the election of a transitional parliament. Stage Two was parliament’s supervision of a new constitution. Once that was adopted, by referendum, Libya would successfully have navigated the Arab spring and transitioned to rule that was representative of the people. This pragmatic approach however, has faced obstacles at each stage since the fall of the regime.
Secondly, the collapse of the regime created a political vacuum as Gaddafi controlled every aspect of Libyan society. Britain and France attempted to fill this huge political landscape with an internationally recognized central government, but this led to the emergence of local and tribal groups to compete with the central authority in Tripoli. Local city councils and militia groups filled the void as the central authority plagued by differences and incompetence struggled to agree on almost anything. Today Libya is becoming more and more divided into regions, with little power in the centre. Libya’s revolution was one of the periphery against the center. It was led by the militias of Benghazi, Misrata and Zintan, and ended not with Tripoli rising up, but with the city being captured by those militias, aided by NATO bombings. Those militias and the communities that spawned them, continue to resist attempts to give up power to the central government. The basic problem that has split Libya into regions was captured by one analyst: “It is important to understand a basic problem, the government blames the militias for still clinging to their weapons whilst the militias accuse Congress and the government of allowing former regime figures to get back into power.”[2]
Thirdly, the drafting of a new constitution continues to split the Libyan populace. The cornerstone of the reform process has failed to materialize, with politicians deadlocked both over the role of Shari’ah law and bitter regional rivalries. Inside congress, lawmakers have remained bogged-down over how to structure a 60-member-strong commission that was to write the constitution. A number of minority ethnic groups continue to call for a boycott of the popular vote that will be needed to institutionalize the new constitution. The Amazigh, Tibu and Tuareg ethnic groups worry that because the writing of the constitution will be based on the vote of the majority and not on the 60-member group agreeing, they, with only a few seats, are likely to be consistently outvoted. The process of writing the constitution is based around incorporating the interests of all the groups rather than developing an identity that will unite them all.

Fourthly, Libya boasts the largest oil reserves in Africa, plus huge deposits of natural gas and $168 billion in foreign assets – all for a population of a mere 6 million.[3] However the central authority facing a myriad of problems has failed to increase oil production. Local militias control important oil export infrastructure and have proven themselves capable of taking over vital infrastructure such as airports to exact demands from the central government. With the central government failing to ensure security and falling short on promises to pay salaries to the militias, Western oil companies began to deal directly with the militias, local oil companies and regional civilian leaders to conduct day-to-day business. A number of sources have confirmed that Western oil companies have hired local militias, specifically the Zentan militia, to protect south-western oil fields from Tuaregs.[4]
Despite suffering under the brutal rule of Gaddafi for decades the people of Libya still face immense challenges in the post-Gaddafi landscape. This has been all the more complicated by foreign interference from France and Britain who have their eyes on Libya’s energy wealth. The role of Islam continues to play a major role in the future of the country, despite opposition by some quarters, who believe this will scare international investors and the international community. On the second anniversary of the fall of Gaddafi and on the third anniversary of the Arab spring Libya remains work in progress, as the Ummah shapes to carve its own destiny.
[1] http://www.bbc.co.uk/news/world-africa-24470850
[2] http://www.libyaherald.com/2013/03/01/analysis-the-security-conundrum/#axzz2hhS1rOJL
[3] http://www.celebritynetworth.com/articles/entertainment-articles/muammar-gaddafi-worlds-richest-200-billion/
[4] Libyan violence threatens oil recovery, UPI.com, 26 September 2012, retrieved 11 November 2012, http://www.upi.com/Business_News/Energy-Resources/2012/09/26/Libyan-violence-threatens-oil-recovery/UPI-73801348692042/
previous

Pakistan on the Verge of War?