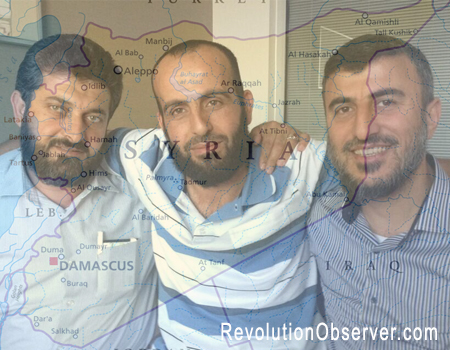 By Ali Harfouch
Syria’s myriad of revolutionary factions became all the more complex recently when two key announcements took place. In Aleppo – thirteen major fighting factions including Jubhat an-Nusrah, Ahrar ash-Sham, and Liwaa at-Tawheed declared an Islamic alliance affirming their rejection of the Western-backed opposition. This declaration came amidst increased efforts by the United States and its allies to provide more logistical and military support to “Moderate” factions in Syria. A few days later, an even more grandiose declaration emerged from Damascus announcing the unity of 43 factions under the banner of the newly-formed ‘Jaysh al-Islam‘ led by the previous commander of Liwaa al-Islam Muhammad Zahran Alloush. These Islamic alliances are significant developments in the Syrian uprising and will impact the trajectory of the Syrian revolution in a number of ways.
Firstly, a central chain-of-command provides the Syrian rebels in the suburbs of Damascus with a new strategic impetus. However, the strength and significance needs to be placed into perspective. Around 38-40 of the brigades or battalions mentioned in Jaysh al-Islam’s statement were in fact already under the umbrella of Liwa al-Islam prior to the announcement. Several of the new brigades were practically unheard of (Kataeb Junoob al Aseema, Liwa Badr, Katibat al Ashayer, Katiba Rayat al Haq) and the remaining new brigades, are relatively small (Liwa Deraa al Ghouta, Liwa Jaysh al Muslimeen, Liwa Omar bin Abdel Aziz, Liwa Tawheed al Islam, Liwa Maghaweer al Qalamoun, Liwa Fatah al Sham, Katiba Suqour Abu Dujana, Liwa Shuhada al Atareb, Kataeb ayn Jalut, Kataeb Nour al Ghouta, Liwa Omar bin al Khattab, Kataeb as Sadiq). From a logistical and military perspective, the move is not of major significance as Jaysh al-Islam remains one of several factions in the area which include Ahrar ash-Sham, Jubhat an-Nusrah and the Islamic State of Iraq and Sham – ISIS.
A look at the names of the factions which were listed as having sworn allegiance to Jaysh al-Islam points to a significant fact; the major Islamic factions in Syria were not aboard. Ahrar ash-Sham, Jubhat an-Nusrah, Suqour ash-Sham and the ISIS were not part of the move – more so – Ahrar ash-Sham and two other strong Islamic factions withdrew from Jaysh al-Islam’s logistical-operations room citing that certain factions had a hegemony in decision making and thus played an arbitrary role. [1] As of now, it is unclear how much political and representative power the newly declared army will have. What we do know is before the emergence of Jaysh al-Islam, the Syrian revolution was largely divided into ‘two’ camps; the ‘Secular’ FSA commanded by Salim Idris on one side and the “radical” Islamic factions like Jubhat an-Nusrah and the ISIS on another. Battalions disenchanted with the Free Syrian Army eventually left the loosely-affiliated and inefficient umbrella group to join the “radical” Islamic factions. Some reports suggested that hundreds of fighters and several major battalions had made such moves. [2] With the emergence of Jaysh al-Islam, disenchanted fighters seeking a more effective and Islamic leadership are given an alternative to both the “Radical” factions and the “Secular” Free Syrian Army. According to Reuters several of its sources have indicated that this in fact was the strategic goal behind the formation of the Army. [3] From an ideological perspective, Jaysh al-Islam, an extension of Liwa al-Islam, espouses a more moderate Islamic political vision than that of factions whose ideology is closer to Salafist-Jihadist.
The formation of an alternative “Moderate” Islamic front is significant in two ways; firstly, a shift from the Western-backed FSA to the explicitly Islamist ‘Jaysh al-Islam’ reinforces the fact that the Syrian revolution is marked and distinguished by its Islamic orientation. It represents the end of any significant influence held by the ‘Secular’  Free Syrian Army and essentially leaves no one standing amongst the ‘opposition’ but those who espouse an Islamic identity. Secondly, and perhaps paradoxically although Jaysh al-Islam is based on Islamic ideals and sentiments, these ideals are not as clearly defined and elucidated as they are with more radical brigades. Ambiguity makes the ‘Army’ prone to being absorbed by regional or international hegemonic powers which support the rise of a “Moderate” Civil State with an “Islamic Reference”. Two facts make this suggestion all the more plausible; Liwa al-Islam has had explicit ties with Saudi and Gulf government entities prior to this declaration. In particular, the leader of the ‘Army’ Zahran Alloush has held close ties with several gulf states over the past few years. More so, the aforementioned operations/logistics room was initiated controlled by Liwa al-Islam was financed and supported by the ‘Council of Supporters of the Syrian Revolution in Kuwait’. [4]
For now, it is difficult to make any decisive remarks about the trajectory of Jaysh al-Islam. Zahran  Alloush has openly denied any ties with external bodies on a statement published on Jaysh al-Islam’s website and has also defended “foreign fighters”[5]. He has yet to express any negativity towards Jubhat an-Nussrah or the ISIS. If the shift from Liwa al-Islam to the newly formed Jaysh al-Islam is not only intended to be a logistical but rather a transformative shift to a more independent and inclusive Islamic faction then the implications are major and will drastically affect the political landscape of post-Assad Syria. As a matter of fact, in an article published on Jaysh al-Islam’s page entitled ‘How Our Revolutions are Stolen” [6] the writer stressed that disunity would allow the ‘ hotel opposition’ to hijack the revolution and steer it away from the actual aims of the revolution. Sincere intentions, rhetoric and zeal however are inadequate bases for political analysis and forecasting. Whether or not the announcement of Jaysh al-Islam represents a sincere transformation of Liwa al-Islam and previously FSA-affiliated factions or represents a malleable buffer-zone between the ‘Secular’ external opposition and the revolution is unclear. Only time will provide some insight into the trajectory of the newly formed Army and its impact on the Syrian revolution.
[1 ]http://www.ahraralsham.com/?p=2857
[2]http://www.theguardian.com/world/2013/may/08/free-syrian-army-rebels-defect-islamist-group
[3]http://www.reuters.com/article/2013/10/01/us-syria-crisis-jihadists-insight-idUSBRE9900RO20131001?irpc=932
[4] https://twitter.com/Abdulmane/status/385474120408113152/photo/1 and
https://twitter.com/mhamdhaif/status/384263221286559745
[5] http://islam-army.com/subject/390

US Shutdown in Perspective