By Adnan Khan In March 2013, America’s invasion of Iraq reached its 10th anniversary. After a decade of nation building, Iraq is falling apart. In April 2013, deadly clashes between government forces and demonstrators in the city of Hawija set off a chain reaction of retaliatory attacks across Iraq. The situation now threatens to plunge the country into the kind of war it experienced in the midst of the insurgency between 2005 and 2007. The...
19th June 20135 min 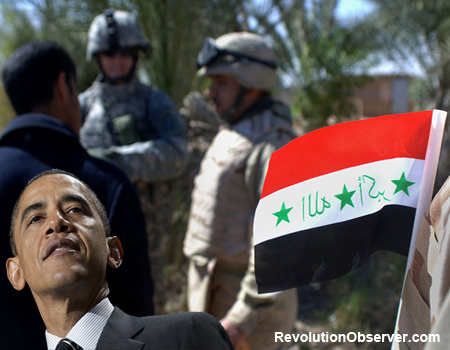 In March 2013, America’s invasion of Iraq reached its 10th anniversary. After a decade of nation building, Iraq is falling apart. In April 2013, deadly clashes between government forces and demonstrators in the city of Hawija set off a chain reaction of retaliatory attacks across Iraq. The situation now threatens to plunge the country into the kind of war it experienced in the midst of the insurgency between 2005 and 2007. The month of April was the deadliest since June 2008, with 712 Iraqis killed, according to the UN Assistance Mission for Iraq.[1] In the week ending 21 May 2013 more than 200 people were killed,[2] as Shi’a and Sunni neighborhoods and places of worship were targeted in a cycle of violence reminiscent of the civil war period. America’s actions are central to why Iraq is on the verge of imploding.
The American invasion of Iraq very quickly descended into problems as the US became entrapped by an insurgency. When the Baker-Hamilton report was released to the US Congress in December 2006 the US was well on its way to drowning in Iraq, and comparisons were being made with Vietnam. It became clear to all that the US had massively underestimated their enemy, and whilst it had rapidly removed Iraq’s conventional forces the unconventional elements in Iraq had brought the US army to a stalemate. The Baker-Hamilton report concluded that “the situation in Iraq is grave and deteriorating” and “U.S. forces seem to be caught in a mission that has no foreseeable end.”[3] America dealt with this in three ways: it enlisted the help of regional surrogates who bordered Iraq – Turkey, Syria and Iran; it divided the insurgency by playing on ethno-sectarian divisions; and constructed a political process with the help of various opportunists, corrupt groups and individuals.
The US administration planned from the outset to dominate Iraq by pursuing the de facto partition of the country into three autonomous, ethnically divided territories for Sunnis, Kurds and Shi’a respectively. This division is at the heart of the current violence and fracture that has gripped the country. The democratic parliament and legislative assembly set up by America in Iraq turned the nation into a factional state with persistent factional infighting. Iraq’s first parliamentary elections in 2005 institutionalised sectarian and ethnic differences. The parliament was split between the United Iraqi Alliance (UIA) led by the Supreme Council for Islamic Revolution in Iraq, which is composed mainly of Shi’a groups, and the Democratic Patriotic Alliance of Kurdistan (DPAK). This precarious settlement undermined and weakened the insurgency, which was reduced to areas around central Iraq, making it much more manageable by US forces.
The current tensions in Iraq have been growing since the 2010 elections where sectarian alliances and divisions were central to the outcome. Politics in Iraq is now a competition for power, resources and state institutions. Today, political and military power in Iraq is highly centralized in the Prime Minister Nouri al-Maliki’s personal office. Al-Maliki is the dominant force over Iraq’s conventional military forces, special operations units, intelligence apparatus, and civilian ministries. Ever since al-Maliki began accumulating power he pursued the elimination of potential rivals. In December 2011, al-Maliki reportedly banned Sunni Deputy Prime Minister Saleh al-Mutlaq from Cabinet meetings and issued an arrest warrant for Vice President Tariq al-Hashimi; both men were members of the Sunni-backed al-Iraqiya List. Al-Maliki’s consolidation of power is leading to all factions utilising their militias in order to gain influence over the central government in order to further enrich their own factions.
An Iraqi implosion has so far been prevented by presence of US forces, who maintain the tenuous system they have constructed. As in many other countries, the US maintains large embassies staffed by civilians and military personnel overseeing the training and equipping of Iraq’s central security forces for an indefinite period. The State Department has 17,000 employees and contractors for this ongoing diplomatic presence.[4] Whilst much has been made of the US drawdown in Iraq it plans to remain permanently in the country to protect its interests. The US strategy since drawing down its troops has been to leave the political system to counter-balance the different factions and ensure the security situation never implodes.
The instability in Iraq is a result of the political architecture the US constructed in order to solve the insurgency and ensure its interests will be maintained. However the US is not the only faction that has its sights on Iraq’s riches, but many other factions and opportunists are looking to enrich themselves. By dividing the nation on ethnic lines the people of Iraq view each other as the problem and not the US, who created the underlying problems. The US-constructed architecture only works because many militias entered the political process and ceased to use violence as a method to achieve their aims. As this American-created political system continues to fail the Iraqi people, these factions, militias and political parties are re-arming themselves and ready to once again use violence to achieve their aims. The US merely replaced Saddam Hussein with a system which has played a pivotal role in making the situation in the country even worse.

7 Reasons Hezbollah Will Lose in Syria!

Why There is No Cold War in Syria