By Adnan Khan Events have reached unprecedented levels in Bangladesh, as demonstrations by government opposition groups have led to what can only be described as a massacre. Hefazat-E-Islam carried out its second large scale demonstration against the Awami League (AL) government in order to express its strong sentiments against the government’s backing of atheist bloggers and strong anti-Islamic stances. The AL is in the final year of its term, and this term has been littered with...
14th May 20135 min 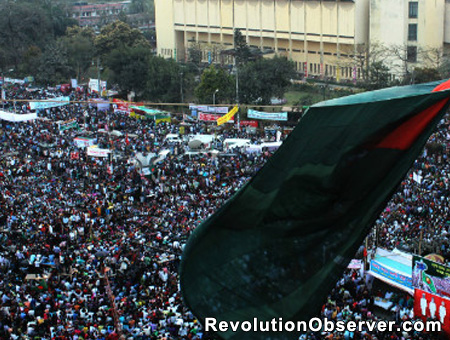 By Adnan Khan
Events have reached unprecedented levels in Bangladesh, as demonstrations by government opposition groups have led to what can only be described as a massacre. Hefazat-E-Islam carried out its second large scale demonstration against the Awami League (AL) government in order to express its strong sentiments against the government’s backing of atheist bloggers and strong anti-Islamic stances. The AL is in the final year of its term, and this term has been littered with corruption, scandal and sheer incompetence. With the prospects looking very dim for the AL in the upcoming elections, Sheikh Hasina and the AL have taken to dictatorship and brute force to maintain their stranglehold on the country.

During the AL tenure Sheikha Hasina undertook a number of actions to clip the wings of Islamic minded groups and reduce their influence. When taking office in 2008 the Awami league announced it would reintroduce the original Four State Principles into the Preamble of the Constitution of Bangladesh. Secularity was one of the principles induced into the original Constitution of Bangladesh in 1972, which was subsequently removed by the military regimes and replaced with “Absolute trust and faith in the Almighty Allah shall be the basis of all actions.” The AL government made numerous changes to the educational curriculum and the educational institutes. They also made changes to family laws, enforced new controls on the Islamic institutions, banned religious gatherings and began a brutal crackdown on Islamic political parties. The AL also set up Kangaroo tribunals to try those individuals who had allegedly committed massacres during the 1971 war of independence. The international Criminal Tribunal (ICT) staffed with individuals appointed by the AL, conducted a vicious campaign against many in the opposition through a fabricated process where they were made guilty before any case was heard.

These actions whipped up nationalist sentiments and emboldened secularists in the country. In this climate, bloggers, part of the Shahbagh movement began attacking Islam, mocking Allah (swt) and His Prophet (saw). They ridiculed the Islamic beliefs and culture. The Shahbagh movement was led by hard-core secularists and atheists. They despise Islam fiercely and have been given a platform by the AL, who didn’t just stand by but gave tactical support to the movement through the guise of ‘freedom of speech’. This led to a standoff on the streets, as there are many sincere Muslims in Bangladesh who were outraged at what had transpired.

From these developments, Hefazat-E-Islam – a group that operates over 25,000 madrassas across Bangladesh – mobilised against the AL government. They served notice on AL by gathering half a million supporters – according to conservative sources – and up to two to three million according to sources on the ground in Dhaka on April 6, 2013, where the main slogan was “hang the atheist bloggers”. Since then Hefazat has launched a 13-point charter of demands. These include: enactment of an anti-blasphemy law with provision for the death penalty, exemplary punishment to all bloggers and others who “insult Islam”, cancellation of the country’s women development policy, a ban on erecting sculptures in public places, a ban on mixing of men and women in public, ending what they call “shameless behaviour and dresses”, and declaring the Ahmadiyas as “non-Muslims”.

On Sunday 5 May Hefazat-E-Islam conducted its second mass demonstrations demanding the overthrow of the government, calling it a peaceful ‘siege of Dhaka’ on the 5th of May. The ‘Siege of Dhaka’ protests were attended by approximately 500,000 people, again in conservative estimates from across the country – other estimates mention as much as 4 million people.[1] After the protest had officially come to an end, a large group of approximately 70,000 protesters decided to stay the night at the place of protest (Shapla Square).[2] In the early morning of the 6th of May, at approximately 2:30am, protesters were awoken by the sound of tanks, helicopters, and the presence of a 10,000-strong security force that included the paramilitary, police, and the Rapid Action Battalion.[3] Alongside this, electricity was also cut-off from the entire area. Following this, according to multiple reports, brutal attacks on the protestors took place, which included the firing of live ammunition and the usage of water-cannons.[4] Reports claim that the bodies of those who were killed were loaded into trucks and taken away by security forces.[5] Despite the plethora of evidence and reports of the killings that have taken place at the Shapla Square, albeit with conflicting reports of the exact number of casualties, the AL joint general secretary, Mahbub-ul-Alam Hanif, claimed that there had in fact been no killings at all.[6]

Two private television channels that were showing live pictures of the attacks on the demonstrators were immediately closed down. The authorities later imposed Section 144 of the Code of Criminal Procedure, 1898, (a provision similar to declaring internal emergency) in the city of Dhaka, under which more than four persons are not allowed to converge in public places and absolutely prohibits public protest. The crisis in Bangladesh has clearly turned into a Islam vs Secularism conflict, whilst the AL looks willing to cling to power, even if it means massacring its own people. This kind of dictatorship strategy did not bode very well for the Arab rulers who were toppled in the momentous Arab Spring revolutions.

Why Did Israel Bomb Damascus?