By Adnan Khan Since the invasion of Mali by French troops, the world has been forced to familiarize themselves with the West African nation as it continues to make global headlines. North Africa and the Sahel region are now receiving global attention as European leaders have made clear their plans to remain in the region for decades. As this latest intervention spiraled out of control into Algeria, David Cameron, the UK Prime Minister’s statement was...
2nd February 20136 min 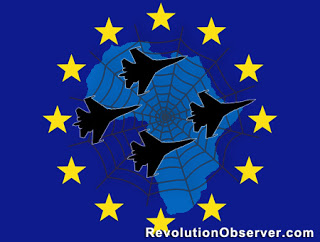 Since the invasion of Mali by French troops, the world has been forced to familiarize themselves with the West African nation as it continues to make global headlines. North Africa and the Sahel region are now receiving global attention as European leaders have made clear their plans to remain in the region for decades. As this latest intervention spiraled out of control into Algeria, David Cameron, the UK Prime Minister’s statement was clear “This is a global threat and it will require a global response. It will require a response that is about years, even decades, rather than months.”[1] François Hollande on the eve of the French intervention in Mali highlighted the context of the intervention: “People often ask how long this will last. I reply, the time it takes. The time it takes to vanquish terrorism in this area.”[2] Europe’s heavyweights have now made North Africa and the Sahara the latest stop on their war on terror.

Africa, as it exists today with its borders crossing over ethno-sectarian boundaries was the result of the 19th century mad scramble for Africa by competing European powers. In order to prevent further conflict between them, they convened at the Berlin Conference of 1884 to lay down the rules on how they would partition up Africa between themselves.[3] However, competition between them remained, leading to both World Wars. WWII impacted the Europeans’ global prowess and ability to maintain their colonial holdings, leading to a reordering of the global balance of power. Whilst the French colonized much of West and Central Africa, Britain took much of East and South Africa. Both nations left a ruling class in power, nurtured over decades to secure European interests when the African nations were formally given independence.

The original scramble for Africa was for its coveted resources, and this has not changed today. European nations have individually maintained relations with dictator rulers, securing favorable trade deals. The difference today is both the US and China are also players on the continent. Half of Europe’s energy is reliant upon imports, 35% of its natural gas is imported from Africa (30% is from Algeria alone). Algeria, Angola, Egypt, Libya and Nigeria in particular have become very important energy suppliers to the European Union. France for instance is the single largest EU importer of Angolan oil. The 27 EU members together buy 66% of Algerian Liquefied Natural Gas exports. Nearly 80% of France’s energy generated by 60 nuclear power plants is dependent on African uranium.

Africa is a region where France has had the deepest impact and operated for the longest period of time. Former president Charles de Gaulle and successive governments have all seen Africa as a “forward base” to support France’s leadership, in maintaining France’s special interests in French-speaking African countries. As one analysis highlighted “In the long term, France has interests in securing resources in the Sahel – particularly oil and uranium, which the French energy company Areva has been extracting for decades in neighboring Niger,” Katrin Sold of the German Council on Foreign Relations said.[4] Today, political power has been reordered on the continent as America is now the leading world power replacing European influence. The French intervention in Mali is due to the coup undertaken by junior officers that have been trained by the US. In Libya, Sudan, Congo and Algeria, the US is attempting to replace both French and British influence with pro-American leaderships.

For the US, diversifying its energy imports has been a key policy, as the Middle East has proven to be unstable over the last decade. While there have been estimates that shale gas would make the US self-sufficient by 2020, US automobiles, railways and jets all run on crude oil and the US has for long had its sights on Africa’s oil reserves. Quoting Walter Kansteiner, U.S. Under Secretary of State for African Affairs, “African oil is of national strategic interest to us, and it will increase and become more important as we go forward.”[5]

What we are witnessing now is only the latest scramble for Africa. The difference this time is that different countries from different regions are all competing for Africa’s coveted mineral wealth, rather than European nations all competing with themselves. Terrorism has once again been used as a pretext to intervene and place troops on the continent who will protect the interests of their host governments for the foreseeable future. For the U.S., Africa has been on its radar for some time, as was pointed by former democratic congressman William J. Jefferson: “Africa provides the oil, helps us with human intelligence, helps with our access to the Middle East so we can have a forward presence. Our tradeoff has to be to help develop Africa with what makes our country work: transportation and information technology. That is the new deal I hope we can get out of this for Africa and the United States. That is where I think our national security interests are.”[5] What remains to be an important question is how long can the US and EU under the pretext of terrorism intervene to maintain their interests before Africa turns out to be another unstable ‘Middle East’.