By Dr. Mohammad Malkawi Until the defeat of the Ottomans following World War I, Transjordan, today known as the Hashemite Kingdom of Jordan, had been part of the Syrian administrative unit. In March 1921, the British Colonial Secretary, Winston Churchill, convened the Cairo Conference that endorsed an arrangement whereby Transjordan would be added to the Palestine mandate, with Abdullah I bin al-Hussein as the Emir under the authority of the British High Commissioner.[1] In 1922,...
25th December 20125 min 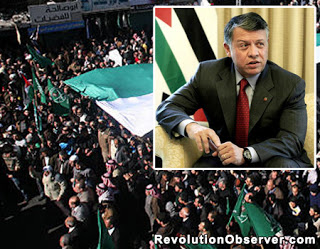 Until the defeat of the Ottomans following World War I, Transjordan, today known as the Hashemite Kingdom of Jordan, had been part of the Syrian administrative unit. In March 1921, the British Colonial Secretary, Winston Churchill, convened the Cairo Conference that endorsed an arrangement whereby Transjordan would be added to the Palestine mandate, with Abdullah I bin al-Hussein as the Emir under the authority of the British High Commissioner.[1] In 1922, the British modified the mandate over Palestine to include a mandate over the territory east of the Jordan River.[2] Until today, the boundaries of Transjordan relative to Palestine are purposely left undefined. In 1994, the Wadi Araba agreement only defined the borders with Israel and left undefined the boundaries with the Palestinian Authority (West Bank of Jordan).
Furthermore, Jordan’s governing remains under the authority of the British commissioner. When King Hussein decided to change the heir to the throne from his brother to his son, he made the announcement from London. The British control of Jordan’s throne and policies is well known to political circles in Jordan and elsewhere.[3] British diplomacy and intelligence had been instrumental in stabilizing Jordan since it came under the mandate of Britain. Among the most effective British strategies towards Jordan was the role provided to Jordan as a buffer zone for regional conflicts; in this role Jordan received millions of refugees fleeing the conflict zones. Jordan has played this role for the Palestinian conflict since 1948. It played that role when the civil war devastated Lebanon in the 1980’s and since 1991 it became a buffer zone for the Iraq conflict. By allocating this role to Jordan, Britain managed to keep rival forces, both local and international, from destabilizing Jordan since a buffer zone serves the interests of all concerned parties.
A country with very limited resources, or at best unexplored resources, Jordan’s economy had been fueled by the Gulf states, which shared the same British masters as Jordan. In recent years, the dynamics in the Middle East as well as in the world at large have gone through deep transformations, which are bound to impact the paradoxical stability of Jordan. The financial meltdown and the global economic downfall have dried major sources of financial support for Jordan. The Gulf states, including Saudi Arabia, are now pressed to fund the ailing economies of the West, which take precedence over aid to Jordan.[4] Consequently, Jordan finds itself pressed for loans, which it cannot pay back. Today Jordan suffers the grave consequences of more than 23 billion dollars of international loans.[5] The International Monetary Fund (IMF) and World Bank (WB) have recently pressed Jordan to cut subsidies on essential energy products in order for Jordan to pay the IMF and WB interest and loan service fees; this move caused instability when it stirred protests and an uprising throughout the country.[6]
Politically, the wave of uprisings and revolutions in the Arab world, especially the ongoing one in Syria, have created an atmosphere for revolt and demand for change in Jordan. Although reluctant and hesitant quite often, a demand for the removal of the King has been heard in the streets of Jordan.[6] The old effective recipe of utilizing rivalry between tribes is losing momentum in Jordan. Jordanian tribes are fueling the daily protests in Jordan. The old British recipe played the Jordanians against the Palestinian influence hoping to keep the Hashemite throne as the ultimate balance and hope for native “Jordanians”. Now, the same antagonistic feeling is directed at the throne. Tribal leaders condemn the throne for being too soft on the issue of preserving Jordan for Jordanians. As the Arab saying goes: “the Magic of the magician turned on himself”.
The claim that Jordan is next in line for a massive revolt is not only a prediction of the near future based on the economic, political, and social forces, but is also a reading of the current daily events and analysis of the changing mindset of the people. During the past 2 years, the king of Jordan was forced to replace three governments under public pressure and corruption charges. The current one, which is the fourth in less than 2 years is facing a similar uproar. The average person in the street has come to a simple and natural conclusion: “the problem is not the government or the prime minister; rather it is he who appoints that government, i.e., the king”. Having realized this tendency, the King’s advisers now propose to have the government formed through the elected body of the Parliament, thus relieving the King from mounting public pressure.
Would this move save the King and keep the revolutionary momentum from reaching a point of no return? That is what the devil would like to believe! The waves of change are stronger than all the levies and obstacles in their path. The revolutions in the Arab world generated a momentum of courage, strong enough to break the barriers of fear among all Arab nations including Jordan. This phenomenon had rendered the intelligence apparatus unable to cope with the growing protest and dissatisfaction of the people and Jordan is not an exception. It is the natural admiration of courage and heroism that makes revolutions contagious. The constant protests in Jordan removed the last veil covering the ugly face of all those in charge of corruption and mischief, including the royals. Due to this change of heart, the masses in Jordan have crossed the main milestone for a real revolution and if they rise up further, Jordan … can be next!
[1] Palestine Royal Commission Report Presented by the Secretary of State for the Colonies to Parliament by Command of His Majesty, July 1937, Cmd. 5479. His Majesty’s Stationery Office., London, 1937. 404 pages + maps.
[2] Article 22, The Covenant of the League of Nations and “Mandate for Palestine,” Encyclopedia Judaica, Vol. 11, p. 862, Keter Publishing House, Jerusalem, 1972
[3] Roger Louis, William (1985). The British Empire in the Middle East, 1945-1951. pp. 348
[4] Gulf States Help Bankroll U.S. Debt, http://www.cbsnews.com/8301-18563_162-3991086.html
[5] Protests in Jordan after fuel subsidy cut, http://www.ft.com/cms/s/0/066b952e-2df0-11e2-8ece-00144feabdc0.html#axzz2FtzafkJs
[6] http://www.ammonnews.net/article.aspx?articleno=138530#.UMAo6_Il7lw.facebook
previous

The Arab Spring in Saudi Arabia