By Abu Anas The United States has a great stake in Syria due to its geopolitical and strategic interest. It is very critical for any politician or activist to understand the interests and strategies employed by the world powers in a specific political scene. In the previous post, we have shed some light on the geopolitical interests of the US in Syria and now we will concentrate on the strategies employed by the US to...
8th August 20124 min 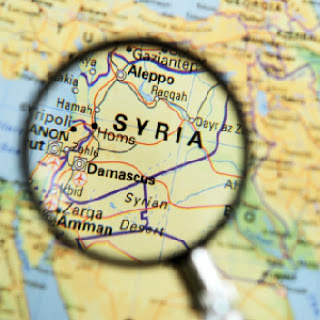 The United States has a great stake in Syria due to its geopolitical and strategic interest. It is very critical for any politician or activist to understand the interests and strategies employed by the world powers in a specific political scene. In the previous post, we have shed some light on the geopolitical interests of the US in Syria and now we will concentrate on the strategies employed by the US to preserve its influence in Syria due to this popular uprising that has shook its agent regime.
Looking backwards to the beginning of the uprising, the US has changed its posture toward the revolution three times, utilizing different strategies due to changes on the Syrian political scene.
The first strategy, which was utilized from the beginning of the revolution for little less than one year, can be termed as the “hands-off approach.” The US policy makers, like many skeptics who knew the viciousness of the Syrian regime, had no doubt that the regime will be able to crush the masses and return them to their homes. The Syrian regime was very stern since the beginning, stating that it is very different from all of the other revolutions and Syria is not vulnerable to popular uprisings. The US was convinced by the regime rhetoric and therefore provided it with the necessary political cover through the Arab Summit and later on the UN resolutions, which gave it lots of time to crack down upon the people. The regime was advised by the US to utilize what was termed as “smart killing”, which is the killing of less than 50 people a day, so as to not enrage the world public opinion against the criminal silence of the Western, so called Democratic and Free, world.
The resilience and determination of the Muslims of Syria has flabbergasted the whole world and sent shock waves through the policy making centers of the Western administrations. That is when the US administration came running with a different strategy to save its agent regime in Damascus, its second strategy, which we can call the “Yemeni approach.” The US started through the Arab League and later on through the special envoy from the UN, Kofi Annan, to promote the “political transition” in similar steps as Ali Abdallah Saleh has taken in Yemen to transfer his powers to a so-called “opposition” transitional government. The deal was, in summary, the stepping down of Bashar al-Assad, securing his exit from the country and the appointment of his vice president, Farouq al-Shar’a, as his successor to lead a transitional government formed by giving some seats in it to an approved set of Syrian opposition figures, mainly from the Turkish-based Syrian National Council (SNC).
Due to the horrendous bloodshed and savagery of the regime’s militias on one hand and the awareness of the Syrian people on the other, such a middle ground compromise that was set to preserve the whole regime, except for a face change, was trampled by the rebels. After 6-months of trying this Yemeni approach, the US had to change gears for a third time. The third strategy which happens to be the current one employed by the US against the revolution can be summarized in the proverb, “if you can’t beat them, join them.” This “infiltration approach” is based on two pillars, the first is to get some of the loyal elements from the regime to defect and join the opposition to steer it away from their goals. The second pillar is to try to buy out some loyalties from the current opposition through money, weapons supply, intimidation, psychological warfare, etc. The goal is to maintain as much of the old regime as possible while at the same time give the illusion of change to the masses to calm the streets and maintain control of the country.
We have seen lots of defections from the top echelon of the regime that would be playing such a role, most notably the close friend of Bashar al-Assad, Brigadier General Manaf Tlass, and the Syrian ambassador in Iraq, Nawaf al-Fares. There has been many news leaks about CIA operatives on the Turkish borders with Syria and even inside Homs and Idlib trying to filter out the FSA factions so support can be given to the appropriate ones. It is in the Syrian vital interest not to allow some of the doubtful characters from the top of the regime, who are defecting now, from leading the revolution or have any role in influencing the future of Syria.
previous

Sinai, Israel and the Game of Nations