By Abu Anas The United States has been in complete support of the Syrian regime since al-Assad, the father, Hafez, who has come to power through a military coup in 1970. Even though the support used to be overt in the past, where US presidents have personally visited Damascus, like in the case of president Nixon and president Clinton, during the era of fighting terrorism, the late Bush administration has kept that relationship hot but...
4th August 20124 min 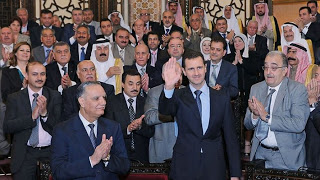 By Abu Anas
The United States has been in complete support of the Syrian regime since al-Assad, the father, Hafez, who has come to power through a military coup in 1970. Even though the support used to be overt in the past, where US presidents have personally visited Damascus, like in the case of president Nixon and president Clinton, during the era of fighting terrorism, the late Bush administration has kept that relationship hot but in a covert manner due to the Syrian support of militant organizations such as Hamas and Hezbollah.
Al-Assad comes from the minority Alawite sect, considered as heretic sect from Islamic perspective, and assuming power in a country dominated by Sunnis would entail getting support from a major world power to subdue the majority. The US considers Syria a very strategic country, so getting control of its affairs becomes a strategic interest for the US. The importance of Syria does not come because of natural resources, as in many other colonized third world countries, but due to its geopolitical importance. First, Syria borders Israel and having a regime which is friendly to Israel is essential to the US. Second, through Syria, one can seize control of another country, Lebanon, which is in itself borders Israel too. Third, Syria is at the heart of the Middle East and the Arab world and having control of that country will help in securing dominance of the region. That is where the interests of the Alawites and the United States intersect in the game of nations!
During the Syrian revolution, the US has taken a hands-off approach to the situation, leaving literally tens of thousands of innocent civilians get slaughtered and raped by this draconian regime. One would think that due to world opinion and human rights, the US might sell out its stake in such a regime and try to help bring it down, as has been suggested by the media and other political analysts. The fact of the matter is that the US did not do that for the mere reason that doing so necessitates the finding of an alternative leadership which would secure the US interests in Syria. There is no political nor logical use of the US helping in bringing a proxy regime down without having a plan to secure the interests which were served by that proxy.
That is where the US dilemma in Syria lies; you have an opposition which is made up of regular army defectors, which the regime have failed to uproot for a year and a half, that are not organized in any way or form through a chain of command that the US can negotiate with or influence! What makes the problem even worse is due to this lack of support from the international community and due to the religiously conservative nature of the Syrian society, you have an Islamic sentiment that grew very strong within the Free Syrian Army, the label which all defected soldiers operate under. This sentiment grew so strong that many of the FSA’s units started to call for the establishment of an Islamic State in Syria, a demand the US will not agree to ever.
All of the above reasons, keeps the US clinging to the already sinking regime of Bashar al-Assad without any real alternatives. The redundant request of the Obama administration for a peaceful political transition is just the articulation of such despair. For the Syrian rebels, having a unity transitional government made up by the same people who have slaughtered and raped almost one or more members of every Syrian family is ludicrous. That despair of the Obama administration can be best viewed through the words of Secretary of Defense, Leon Panetta, where he was quoted by CNN saying on July 30th, 2012, “I think it’s important when Assad leaves – and he will leave – to try to preserve stability in that country. And the best way to preserve that kind of stability is to maintain as much of the military, the police, as you can, along with the security forces, and hope that they will transition to a democratic form of government. That’s a key.”[1]
The US wants to keep as much standing pieces of the old regime so it can use them in the post-Assad era to influence the form of government and to ascertain the loyalty of the future regime. For the Syrian people, if they are looking forward for real emancipation from tyranny and colonialism, they have to make sure that every single actor in the previous regime gets sidelined in any future Syria!
[1] http://security.blogs.cnn.com/2012/07/30/panetta-says-when-not-if-al-assad-falls-syrian-military-should-remain-intact/
previous

Welcome To The Revolution Observer!

The US Strategy In Syria