The clerical regime has been in power since the 1979 revolution, but decades of corruption, incompetence and with declining demography and economy it is today weaker than it’s ever been

Students in Shiraz, the southern city in Iran, heckled a Basij officer as he addressed them on 4 October 2022. Teenagers waved their headscarves and shouted, “get lost, Basij.” This comes as protests enter the third week across Iran after the death of Mahsa Amini on 13 September at the hands of Iran’s morality police, when she was arrested for violating the country’s dress code. The protests that have ensued are the biggest the clerical regime is facing since demonstrations prior to COVD-19 lockdowns against the country’s economic situation, where 1,500 died. The clerical regime has been in power since the 1979 revolution, but decades of corruption, incompetence and with declining demography and economy it is today weaker than it’s ever been. Whilst it’s unlikely the regime will be toppled, it’s also unlikely it can also survive in its current form.

When the Shah was overthrown in 1979 the narrative by the clerical regime was that an Islamic revolution took place, which was anti-American, all held together by an independent minded Ayatollah Ruhollah Khomeini, with grand ambitions to turn Iran into a regional power. Despite the revolution being considered as an Islamic one, the groups involved were mostly non-Islamic and included communists, academics, leftists, unions and many others who were not looking for an Islamic revolution. Once in power Islam was the last thing on Khomeini’s mind and he focused on dealing with all the potential threats to the new regime, which led him to turn on all those groups that helped him to power. Khomeini was so paranoid he created the Islamic Revolutionary Guard Corps (IRGC) as he didn’t trust the military.

Despite the revolution being considered as an Islamic one, the groups involved were mostly non-Islamic and included communists, academics, leftists, unions and many others who were not looking for an Islamic revolution

The clerical regime created numerous pillars and state institutions to maintain their grip on power. They created a political framework which has allowed them to dominate Iran and its politics ever since. At the apex of this system is the most powerful individual, the supreme leader, a position that has thus far been held by only two individuals. The first was the founder of the Islamic Republic, Ayatollah Khomeini, who held the post from 1979 until his death in 1989. He was succeeded by his key aide and a former two-term president, Ayatollah Ali Khamenei, who has been supreme leader for the past three decades and is currently still in authority. The supreme leader is not elected by a public vote but rather by the Assembly of Experts, which is a group of high clerics. He has vast powers and appoints the leadership of the country’s most powerful political institutions, including the state broadcasting, the Joint Staff, the head of the Islamic Revolutionary Guards Corps (IRGC) and the Guardians Council. 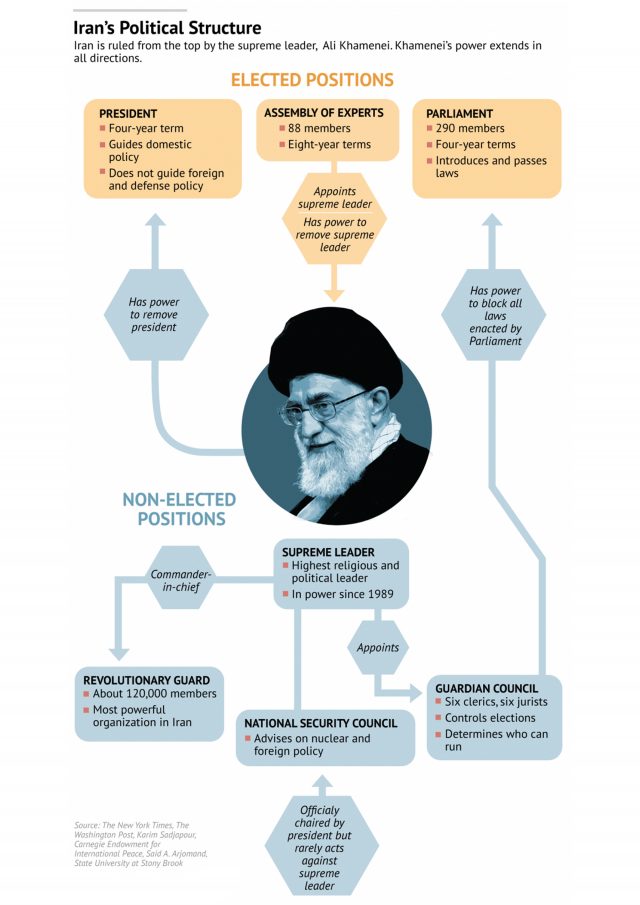 The clerical regime, like the Pahlavi dynasty before it, established a centralised system as only 50%-60% of Iran’s population is Persian. Iran is divided into a large number of ethnic groups and the clerical regime like the regime before it maintains a security state not just to maintain its regime but also govern large minorities who could pose a threat. In the north-west of Iran reside the Kurdish ethnicity and Azeri’s who do not see themselves as Persian. The Azheri’s have separatist movements in the Ardabil province and want to join Azerbaijan. The death of Mahsa Amini, who was Kurdish, resulted in this region holding the largest protests against the regime. Both the Kurds and Azheri’s have for long been mistreated by the regime as they don’t trust them. In the south-west is Iran’s most strategic region of Khuzestan which holds its energy resources. This is where the Arabs have for long resided, who have taken exception that the region was called Ahwaz and this was changed by the regime to Khuzestan in order to Persianise it. The regime has for long siphoned off the region’s energy wealth and left a huge mess in terms of poverty and unemployment in the region. On Iran’s eastern borders there has for long been issues along the Afghan border and the Sistan-Baluchistan province, which is largely Sunni and has always been unstable as the people there have struggled with poverty, whilst the regime viewed them as a suspect community. Iran is a huge nation with inhabitable plains and mountains surrounded by rural and urban Persian regions. These are then surrounded by large minorities and together they match the Persian population. 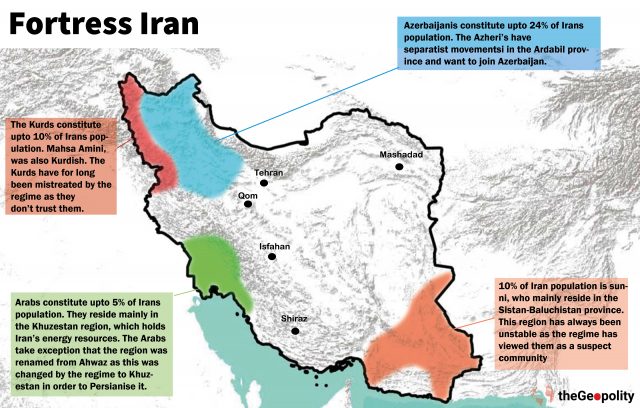 The clerical regime has faced many uprisings and protests throughout its four decade reign. What we are seeing in Iran today is really just the most recent version of this. Prominent Iranian sociologist Mohammad Fazeli from Tehran University said that the protests are not simply the outcome of recent events, but they are the product of more than 40 years of bad governance. Fazeli said that there are many unresolved problems that have been accumulating during the past four decades, without any attempt by the government to address them. He said, “When President Raisi says he will probe into Mahsa Amini’s death, the people cannot trust him because similar cases in the past remained unresolved.” Meanwhile, the absence of hope for the future after several decades of high inflation, near-zero economic growth, the decline of the administrative system and many other factors have led to anger towards the Iranian regime, and many Iranians no longer are scared to protest and speak out against the failed rule of clerics.

What has turned many against the clerical regime is the fact that after four decades it has ruined the economy, impoverished the people and continues to suppress them. Iran’s GDP declined 70% from $599 billion in 2012 to $191 billion today! Living standards in Iran today have reached their lowest point in more than a century. Prices continue to skyrocket, making essential goods like food and medicine unaffordable for most Iranians.

the protests are not simply the outcome of recent events, but they are the product of more than 40 years of bad governance

In Iran change historically has come in two ways. Either a foreign power invades or supports a faction within Iran: this is what took place when both Russia and Britain invaded Iran at the beginning of WW1 and WW2 to ensure it could use Iran’s energy resources for the war effort. In 1979 the Persians and the minorities and people from different strata of society came together to oust the Shah. Today the minorities in Iran will need large support from the Persians if they want to topple the regime. The opposition movement currently is carrying out large protests, but they are fragmented as they have no central leader and they have not mobilised the rural areas which are the support-base of the clerics. A lot of this has been due to the coercive capabilities of the regime. The army and the IRGC have remained intact which is a clear sign the protests are not having their intended effect.

Iran is gradually transforming from a theocratic state dominated by the clerics to one dominated by the IRGC, who sees themselves as the guardians of the 1979 revolution. As the clerics lose credibility it’s unlikely after the death of Khamenei the IRGC will need a supreme leader for them to remain in power so there may be a supreme leader with limited powers for symbolic purposes. An autocratic government led by a military leader may very well be the future of Iran. Very similar to Iran in the early 20th century when Col. Reza Khan, became prime minister in 1921, overthrew Ahmad Shah in 1925 and established the Pahlavi dynasty.