Amid weeks of protests, Sri Lanka defaulted on her foreign debt in May 2022 after failing to agree a restructuring deal with her creditors. Sri Lanka was due to make repayments of $7 billion in 2022 but a shortage of foreign reserves, declining economic outlook, growing protests and corruption has brought to an end one of South Asia’s best performing economies. After the end of a devastating 26-year civil war in 2009, the island of 22 million had the makings of an Asian economic success story. Under governments run by the powerful Rajapaksa family, annual economic growth peaked at 9%. By 2019, the World Bank had classified the island as an upper-middle income country. Sri Lankans enjoyed a per capita income double that of neighbours, along with longer lifespans thanks to strong social services such as healthcare and education. The country tapped international debt lenders to rebuild, becoming a key private Asian bond issuer and participant in China’s Belt and Road Initiative.

But violent protests against the Rajapaksa family grew as the economic fantasy rapidly descended into a nightmare for the masses. The Sri Lankan story is just the recent story of a third world nation who was on the road to prosperity but the bubble burst enroute. Sri Lanka once was the richest economy in the region and regularly topped economic and social indicators.[1][2] So, how has it all gone horribly wrong?

Sri Lanka much like the rest of the region has a history of dynastic families dominating national politics. The Rajapaksa family came to power when Mahinda Rajapaksa became President in 2005. His brother Gotabaya Rajapaksa as the Defence Minister was hailed a hero after defeating Tamil Tiger’s in 2009 after the long civil war. The Rajapaksa’s used this popularity to remain in power and their hold on power led to an increase in Foreign Direct Investment (FDI) which saw large scale infrastructure projects across the island nation. Many of these were mired with corruption and in the end provided low returns and filled the pockets of the politically connected business class.

During Mahinda Rajapaksa’s second term as president, 40 members of the family filled in key government positions, in addition to the cabinet.[3] In 2019 the three Rajapaksa brothers occupied the most important seats of the island, Gotabaya as the President, Mahinda became the Prime Minister and Basil Rajapaksa became the Finance Minister. The family pursued populist policies and reduced VAT rate from 15% to 8% and abolished the 2% national development tax without any revenues to replace the fall in government revenue.[4] Government revenues fell 30%,[5] forcing Sri Lanka to take on foreign debt.

Trouble was already brewing when Covid-19 emerged in early 2020. With global lockdowns and severe restrictions placed on travel. Tourism, a major source of dollars for Sri Lanka collapsed. Tourism was bringing in 13.7% of total foreign exchange earnings in 2019 but nose-dived to a mere 3.3% in 2020.[6] Overseas remittances – the nation’s main foreign exchange earner, fell 60% to $812 million by the end of 2020. Migrant workers were forced to utilise unofficial channels after exchange rate controls were put in place. All this further added to the declining situation in the country.

China has long been blamed for Sri Lanka’s economic woes.The 2017 port of Hambantota handover to  China as collateral is usually cited as evidence. Whilst this opinion gets a lot of air time, on closer inspection Chinese loans make up only 10% of Sri Lanka’s total debt. Sri Lanka’s top lender are her sovereign bond holders, at 47%.[7] 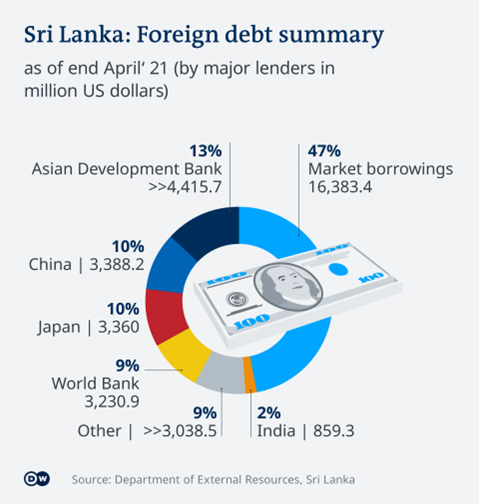 China has been working in Sri Lanka for more than a decade to maintain her presence in the island as she straddles the global Sea Lines of Communication (SLOC).  China made her way into Sri Lanka during the civil war in the 2000s, when India refused to support the regime during the civil war, China came with arms and aid. In time China became one of the biggest investors and creditors for the island’s mega projects that Rajapaksas used to build their empire.

For the moment it’s likely that the Rajapaksas will remain in power despite the backlash from the public. The opposition remains weak in Sri Lanka and Gotabaya’s credibility in the military will help the family navigate through the crisis. Sri Lanka’s military has no history of intervening and the Rajapaksas’ leadership during the civil war gained him the loyalty of the generals. The ruling family will likely need financial help and this looks like it’s coming from India and Japan and possibly a bailout package from the IMF.

Sri Lanka is rich in natural resources and human capital. She has significant oil and gas deposits in the Mannar basin. But the ruling family has failed to utilise these for the benefit of the people. It’s most likely the trouble in Sri Lanka will continue.

What Are the Key Types of Renewable Energy? 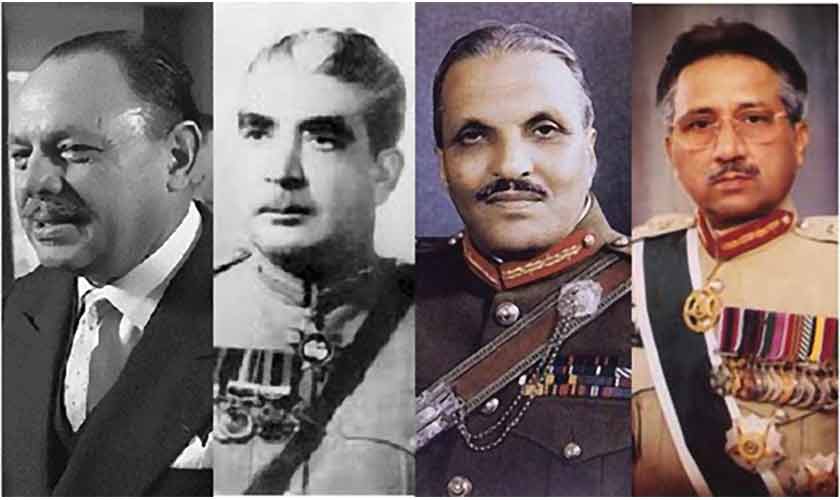