The COP26 global climate summit brings together nearly 200 leaders. But after decades of summits geopolitics rather than saving the planet dominates their outcome

The COP26 global climate summit kicked off in Glasgow, UK, this week. It brought together nearly 200 leaders who are being asked to present their plans to cut emissions by 2030. There has been growing urgency about the state of the world from pollution to waste, droughts to the poisoning of the world’s waters, something needs to be done as we are destroying the planet. But after decades of summits between the world’s largest polluters, geopolitics rather than saving the planet dominates the outcome. 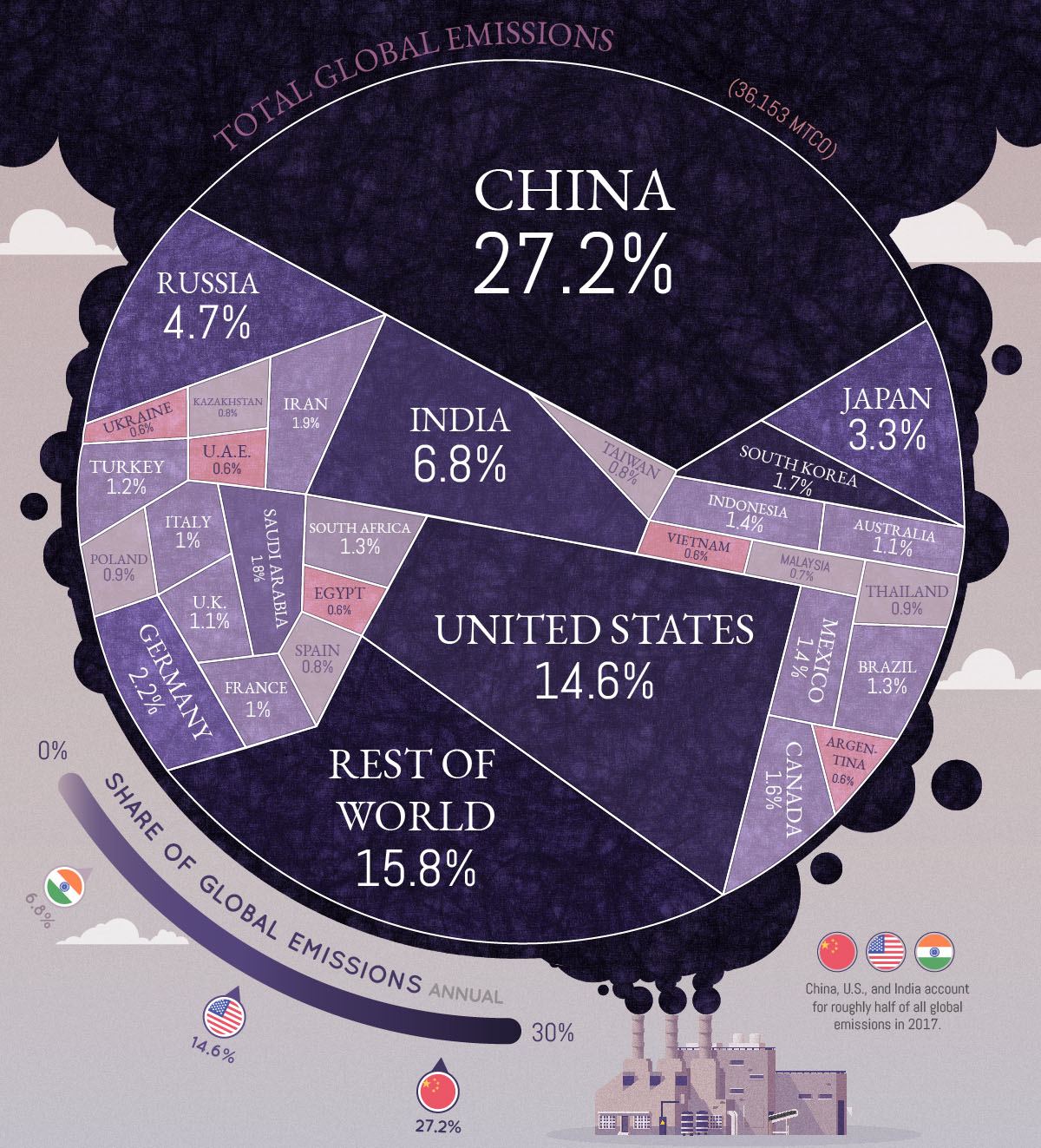 In 1988 the United Nations formed a group called the Intergovernmental Panel on Climate Change (IPCC). The IPCC first came together in 1990, stating that “emissions resulting from human activities are substantially increasing the atmospheric concentrations of greenhouse gases,”[1] various conferences have been held and attended by both developed and developing countries. But it wasn’t until 1997 that a so-called meaningful objective was achieved with the announcement of the Kyoto Protocol in Japan. An agreement which managed to get 192 parties in agreement, with “binding” emission targets. Although the agreement only came into place in 2008, more than a decade after announcement.

The position of the IPCC and many scientists is that the average temperature of the Earth is rising at nearly twice the rate it was 50 years ago and this cannot be explained merely by natural cycles. The contribution of greenhouse gases emitted by human societies via the combustion of fossil fuels is culpable for this recent direction. These greenhouse gases trap heat within our atmosphere including carbon dioxide and methane. This trapping of heat is very deadly for the planet and affects us in a multitude of negative ways.

The solution to this environmental catastrophe has been led by the left and focuses on gradually reducing emissions by moving away from fossil fuels to green sources. The G20 summit prior to the COP26 gathering saw a number of nations propose how they plan to reduce the use of fossil energy and move to Green renewable sources. There are numerous challenges for this to be achieved beyond most nations not sticking to their emission reduction commitments. Whole industries have been built upon fossil energy from automobiles, petrochemicals, agriculture, plastics, cement, steel, electronics and many others. China’s economic miracle is built upon its use of its immense coal reserves and even today coal still provides 60% of its electricity. The left see the abandonment of fossil fuels as the solution to the environmental problems the world faces. The extreme environmentalists argue for the ban of fossil fuels and are concerned about nuclear energy and argue people should stop eating meat.

The opposition to this, which is usually found on the right of the political spectrum, is that global warming is somewhere between highly speculative and “the greatest hoax,” to quote from the title of a book on the subject by Senator James Inhofe, a Republican with significant influence on climate matters. They believe environmentalists use the specter of catastrophic climate change to pursue an agenda of their own, one that places nature over the needs of people, forces the switch from fossil fuels to alternative energy sources, and tends toward “big-government intervention.” They argue that science does not show conclusively that climate change warrants the policies being currently pursued. Some on the right also believe changing the environment back is not economically feasible. They also assert that attempts to address climate change, such as caps on greenhouse-gas emissions, could cause more economic harm than their environmental good. Whilst others see the only solution is new technology that could replace the energy sources we use today. They just need around 50-100 years to invent such technology. The opposition to turning green is predicated on keeping the global economy the way it is and not making the drastic changes the left advocates.

Climate change is a scientific theory and science is always in a constant state of evolution. Our understanding of how different aspects of climate interact is expanding, as is our ability to forecast future environmental behaviour. Increased computing power increases modelling capacity. But we are still limited by instrumentation and by our inability to measure and fully understand climate conditions. Scientific models used to predict the magnitude of climate change, as well as the effects climate change will have in various regions, are not completely reliable. Because there are so many variables involved in developing climate models, structural uncertainty is inevitable. Every equation output is used as an input somewhere else, exponentially increasing the effects of any mistake or incorrect assumption, and each iteration can breed new errors. In most climate calculations the data begins from only 1850. There are several ways to model climate scenarios, depending on the variables included and the weight given to each one. Limited and uneven data further complicate matters as more data is available on land than sea and more temperature readings are collected in highly developed countries than in developing ones. Forecasts also invariably rely on assumptions about future human behaviour and technological development.

Climate change is a scientific theory and science is always in a constant state of evolution…Every equation output is used as an input somewhere else, exponentially increasing the effects of any mistake or incorrect assumption, and each iteration can breed new errors

None of this however detracts from the pollution spewed into the air, the waste poured every year into the world’s rivers and oceans. The waste from over consumption, the obesity epidemic, the clearing of forests to make way for cities, these are all man-made disasters that we face here and now. The US environmental protection agency estimated that in 2018 about 146 million US tons of municipal solid waste (132 million metric tonnes) were landfilled. Food was the largest component at about 24%. The contamination of drinking water due to chemical pollutants from factories, fertilizer run-off from farming, and sewage. Heavy metals, harmful chemicals, microplastics, and even radioactive isotopes are harmful pollutants. Pollution that is disposed of in rivers and into the sea is returned back to humans in the food we eat. These problems are with us irrespective of the situation with the environment.

The solutions to the climate do not address the lifestyles people are living and in fact attempt in their own way to maintain the same lifestyles with small changes. Perpetual economic growth, consumerism, debt and spending and material wealth is the system that Capitalism promotes and is the dominant ideology for much of the world. This issue requires systemic change, as many of the causes lay in the global capitalist system, but no one is currently proposing a solution that addresses the endemic consumerism fueling demand for material goods, driving up pollution as well as economic growth. The focus on emission targets ignores the need to manage demand for material products in a capitalist system that clearly has no intention to challenge consumerism and an endless quest for economic growth. The international negotiations about targets are about powerful nations competing to act in their own interests – each trying to achieve an outcome in negotiations that favours itself.

Wanting material wealth and then wanting to end environmental degradation is in the end, a  fantasy.