The Taliban announced their new interim government, which did not include anyone from the previous regime. They now face the more important task of ruling Afghanistan which face many challenges

It has now been over three weeks since the Taliban returned to power and they finally announced their much anticipated interim government. The announcement, after a number of delays, came shortly after crushing the rebellion by the National Resistance Front (NRF) in the Panjshir region. But the delays raise the prospect of internal conflicts regarding key positions between (relatively) moderate and hardline Taliban members. This has been picked up by world leaders such as Britain’s Boris Johnson who stated “We need to ensure that the elements of the Taliban who are different, as I believe they are, from the Taliban of 1996-99 are encouraged and that we put the maximum pressure on them not to allow the more retrograde elements to have the upper hand.”[1]

So far, only key leadership positions have been announced and they are dominated by the Taliban’s “old guard”, despite promises of an inclusive government. Of the 33 roles announced, 14 are former Taliban officials during their previous 1996-2001 rule, five are former Guantanamo detainees and the remaining 12 are officials from the second generation of the movement.[2] The supreme leader, who will be bestowed the prestigious title of “Amir ul-Mu’minin” (commander of the faithful), will be Mawlawi Hibatullah Akhundzada. The all-male cabinet will be led by Mullah Mohammad Hassan Akhund, one of the movement’s founders and former deputy PM and foreign minister during the Taliban’s five year stint in power. Akhund is currently under UN sanctions for his role in the government during that period. Sirajuddin Haqqani, the leader of the notorious Haqqani network, who is on an FBI most wanted list with a $5m bounty on his head, will head the interior ministry. The Haqqani network was behind some of the deadliest attacks against American and coalition forces during the 20 year war. 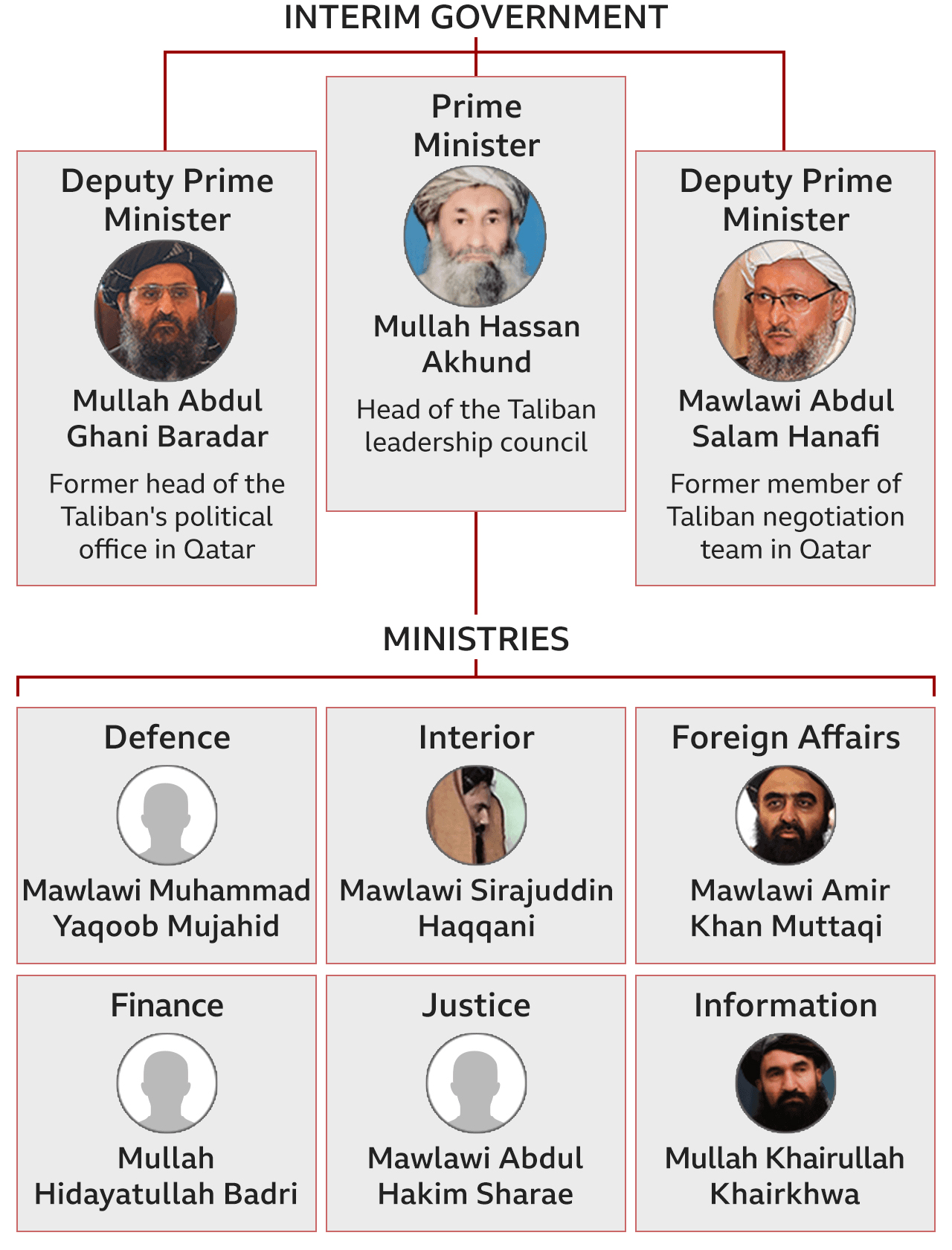 Taliban founder Mullah Omar’s son, Mullah Yaqoob, who is likely being groomed as the future supreme leader, will act as defence minister and the foreign minister will be Amir Khan Muttaqi who is a senior leader. Mullah Abdul Ghani Baradar, one of the Taliban’s co-founders, will be one of two deputies to the PM. Baradar was previously head of the Taliban’s political office, based in Doha and oversaw the signing of the peace deal with the US last year. Baradar was released from prison in 2018, after serving eight years, as part of a plan to facilitate the Peace Process. In 2020, Baradar became the first Taliban leader to communicate directly with a US president after having a telephone conversation with Donald Trump.[3]

The Taliban have expressed their desire to seek international recognition and to establish diplomatic relations stating they want “strong and healthy relations with our neighbours and all other countries based on mutual respect and interaction” adding that they would respect international laws and treaties “that are not in conflict with Islamic law and the country’s national values.”[4] The international community on the other hand, have been slow to reciprocate with any recognition of the new regime. The EU and UN have expressed their disapproval on the grounds of lack of inclusivity of minorities and women, in addition to the cabinet containing individuals on the UN sanctions list. Meanwhile, the US is convening talks with up to 20 Western nations to set a framework for cooperation with the Taliban.[5] Pashtuns, the largest ethnicity in Afghanistan, will make up more than 90% of the Cabinet.[6] Asked why no women were given posts, one senior Taliban figure told the BBC that the cabinet had not been finalised yet. The clear reference to Shari’ah law being the basis of governance is also likely to form an impediment to ties with Western nations, given they have spent the past 20 years tarnishing what is ostensibly an Islamic form of governance.

The clear reference to Shari’ah law being the basis of governance is also likely to form an impediment to ties with Western nations, given they have spent the past 20 years tarnishing what is ostensibly an Islamic form of governance

However, the Taliban have their eyes set on a more promising prize a stone’s throw away. Earlier this week China announced $31m of emergency aid, a mere token of their relationship which will include grain, winter supplies as well as three million Covid-19 vaccine doses. The Taliban have declared that China, with whom they share a land border, will be its “main partner” in rebuilding the war-torn country.

Funding is not the only challenge facing the Taliban, who have far more experience defeating superpowers than they do running a government. The Taliban will need support from former regime officials, at least at lower levels, to ensure the smooth running of day to day governance. This has yet to be actualised despite the Taliban’s outstretched hand. Officials who served in the Ghani regime have been asked to return to Afghanistan with PM Akhund promising the Taliban “will guarantee their security and safety”.[7] Amnesty has also been promised to anyone who worked alongside the US and former US-backed administrations following the 2001 invasion. In a statement issued soon after the caretaker cabinet was announced, the Emir noted that “all talented and professional people” were desperately needed for their “talents, guidance, and work.” [8]

We are yet to see any announcements on policies and priorities, the most pressing of which would be the stabilising of a rapidly deteriorating economy. Afghanistan’s economy, of which 42% depends on international aid, has seen her reserves frozen by the US. The Taliban’s first challenge will therefore largely be assessed by how well they maneuver through this economic quagmire.

[3] Afghanistan: Who’s who in the Taliban leadership – BBC News

PODCAST: Is the American Century Coming to an End?