With rapidly changing demographics, shifting values and attitudes, growing political uncertainty, and exponential advances in technology, it’s clear the next decade is setting up to be one of historic transformation
26th January 20218 min

By Jeff Desjardins of Visual Capitalist

The world is changing faster than ever before.

With billions of people hyper-connected to each other in an unprecedented global network, it allows for an almost instantaneous and frictionless spread of new ideas and innovations.

Combine this connectedness with rapidly changing demographics, shifting values and attitudes, growing political uncertainty, and exponential advances in technology, and it’s clear the next decade is setting up to be one of historic transformation.

But where do all of these big picture trends intersect, and how can we make sense of a world engulfed in complexity and nuance? Furthermore, how do we set our sails to take advantage of the opportunities presented by this sea of change?

For most of the history of business, the world’s leading companies have been industrially-focused.

Pioneers like Henry Ford and Thomas Edison innovated in the physical realm using atoms – they came up with novel ways to re-organize these atoms to create things like the assembly line and the incandescent lightbulb. Then, companies invested massive amounts of capital to build physical factories, pay thousands of workers, and build these things.

The majority of the great blue chip companies were built this way: IBM, U.S. Steel, General Electric, Walmart, and Ford are just some examples.

But today’s business reality is very different. We live in a world of bytes – and for the first time technology and commerce have collided in a way that makes data far more valuable than physical, tangible objects.

The best place to see this is in how the market values businesses.

As you can see above, companies like Apple, Amazon, and Microsoft have supplanted traditional blue chip companies that build physical things.

The tech invasion is leveraging connectivity, network effects, artificial intelligence, and unprecedented scale to create global platforms that are almost impossible to compete with. The tech invasion has already taken over retail and advertising – and now invading forces have their eyes set on healthcare, finance, manufacturing, and education.

Will atoms ever be more valuable than bytes again?

2. The Evolution of Money

Money is arguably one of humanity’s most important inventions. From beaver pelts to gold bars, the form and function of money has constantly fluctuated throughout history.

In the modern world, the definition of money is blurrier than ever. Central banks have opted to create trillions of dollars of currency out of thin air since the financial crisis – and on the flipside, you can actually use blockchain technology to create your own competing cryptocurrency in just a few clicks.

Regardless of what is money and what is not, people are borrowing record amounts of it.

The world has now amassed $247 trillion in debt, including $63 trillion borrowed by central governments: 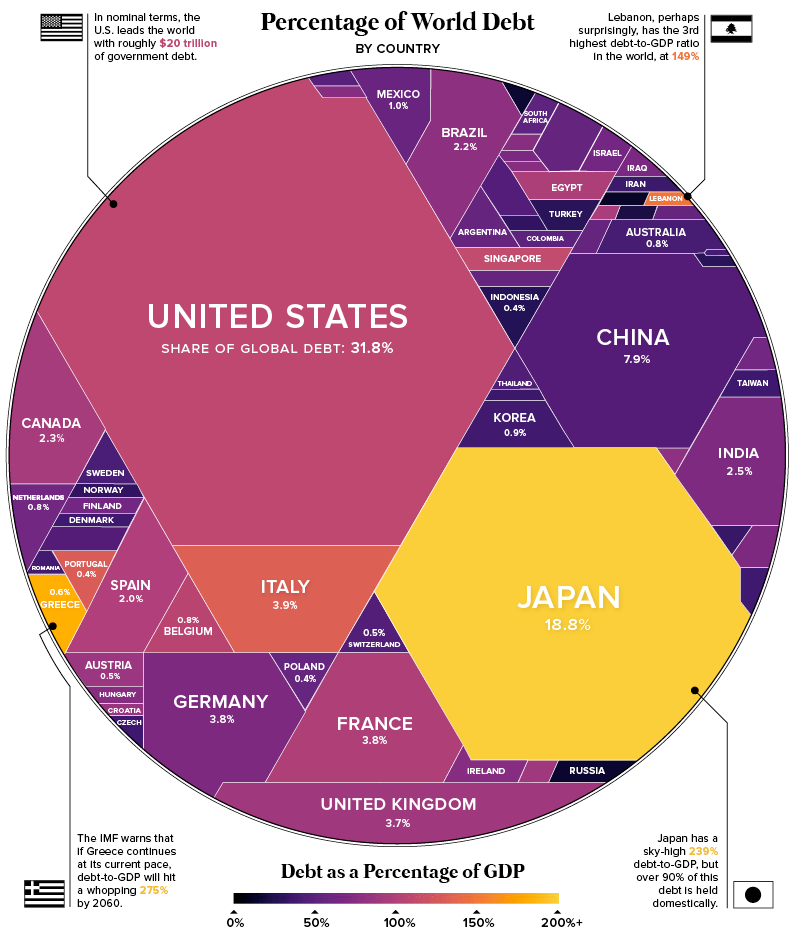 Here are other examples that illustrate the evolution of money: Venezuela has hyperinflated away almost all of its currency’s value, the “War on Cash” is raging on around the world, central banks are lending out money at negative interest rates (Sweden, Japan, Switzerland, etc.), and cryptocurrencies like Bitcoin are collectively worth over $200 billion.

How we view money – and how that perception evolves over time – is an underlying factor that influences our future.

Wealth is not stagnant – and so for those looking to make the most out of global opportunities, it’s imperative to get a sense of how the wealth landscape is changing.

The modern view is either extremely healthy or bubbly, depending on how you look at it: Amazon and Apple are worth over $1 trillion, Jeff Bezos has a $100+ billion fortune, and the current bull market is the longest in modern history at 10 years.

Will this growth continue, and where will it come from?

Here’s one look based on projections from the World Bank: 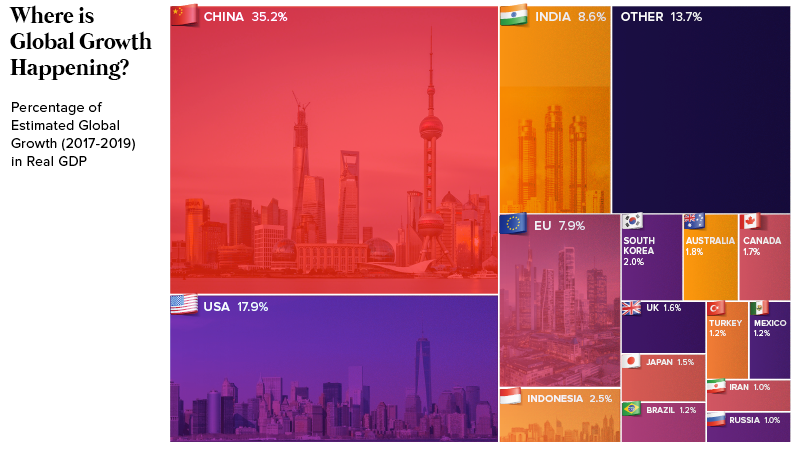 Despite these estimates, there is a laundry list of items that the ultra-wealthy are concerned about – everything from the expected comeback of inflation to a world where geopolitical black swans seem to be growing more common.

Here’s why those building and protecting wealth are rightly concerned about such events: 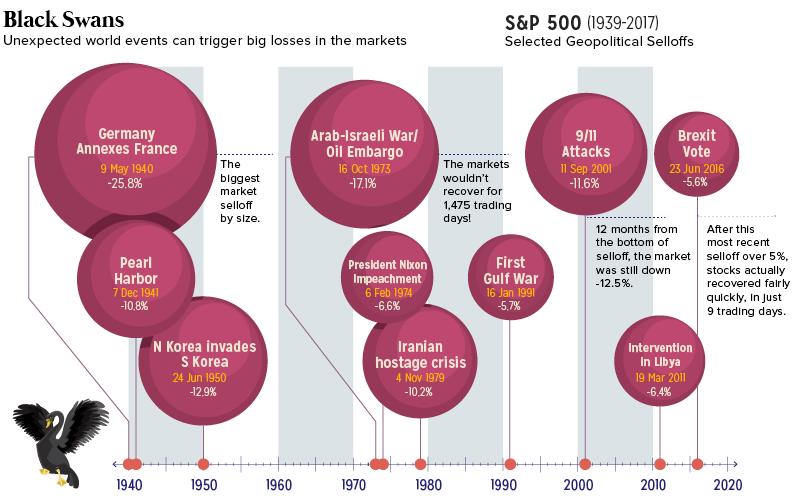 But the wealth landscape is not all just about billionaires and massive companies – it is changing in other interesting ways as well. For example, the definition of wealth itself is taking on a new meaning, with millennials leading a charge towards sustainable investing rather than being entirely focused on monetary return.

How will the wealth landscape look a decade from now?

The economic rise of China has been a compelling story for decades.

Up until recently, we’ve only been able to get a preview of what the Eastern superpower is capable of – and in the coming years, these promises will come to fruition at a scale that will still be baffling to many.

Understandably, the scope of China’s population and economy can still be quite difficult to put into perspective.

The following map may help, as it combines both elements together to show that China has countless cities each with a higher economic productivity than entire countries. 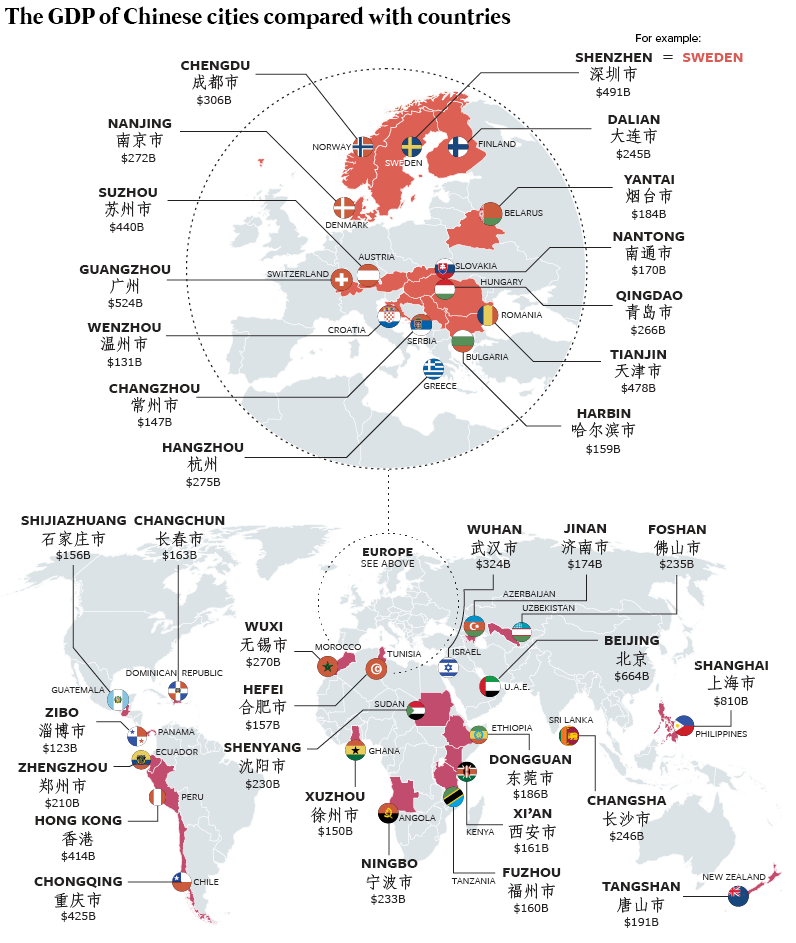 In fact, China has over 100 cities with more than 1,000,000 inhabitants. These cities, many of which fly below the radar on the global stage, each have impressive economies – whether they are built upon factories, natural resource production, or the information economy.

As one impressive example, the Yangtze River Delta – a single region which contains Shanghai, Suzhou, Hangzhou, Wuxi, Nantong, Ningbo, Nanjing, and Changzhou – has a GDP (PPP) of $2.6 trillion, which is more than Italy.

As we’ve already seen, there are many facets of change that will impact our shared future.

But here’s the kicker: when it comes to technological progress, the rate of change itself is actually getting faster and faster. Each year brings more technological advancements than the last, and once the exponential “hockey stick” kicks into overdrive, innovations could happen at a blindsiding pace.

This could be described as a function of Moore’s Law, and the law of accelerating returns is also something that futurists like Ray Kurzweil have talked about for decades.

Interestingly, there is another offshoot of accelerating change that applies more to the business and economic world. Not only is the speed of change getting faster, but for various reasons, markets are able to adopt new technologies faster:

New products can achieve millions of users in just months, and the game Pokémon Go serves as an interesting case study of this potential. The game amassed 50 million users in just 19 days, which is a blink of an eye in comparison to automobiles (62 years), the telephone (50 years), or credit cards (28 years).

As new technologies are created at a faster and faster pace – and as they are adopted at record speeds by markets – it’s fair to say that future could be coming at a breakneck speed.

It’s no secret that our civilization is in the middle of a seismic shift to more sustainable energy sources.

But to fully appreciate the significance of this change, you need to look at the big picture of energy over time. Below is a chart of U.S. energy consumption from 1776 until today, showing that the energy we use to power development is not permanent or static throughout history. 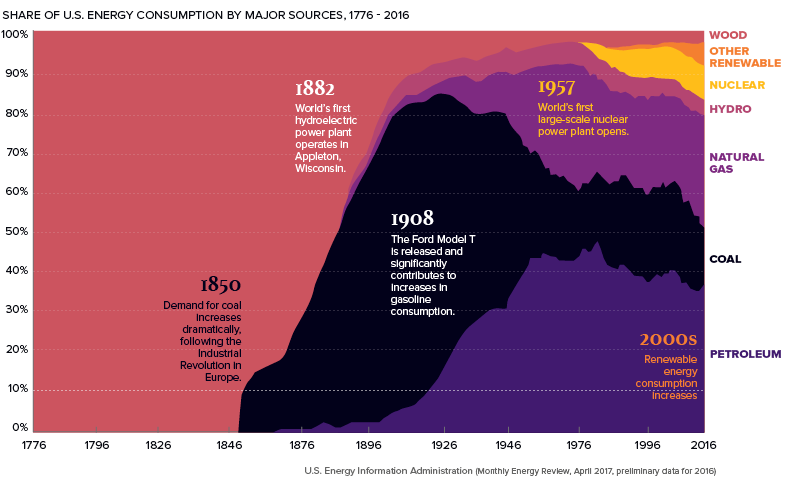 And with the speed at which technology now moves, expect our energy infrastructure and delivery systems to evolve at an even more blistering pace than we’ve experienced before.

Global demographics are always shifting, but the population tidal wave in the coming decades will completely reshape the global economy.

In Western countries and China, populations will stabilize due to fertility rates and demographic makeups. Meanwhile, on the African continent and across the rest of Asia, booming populations combined with rapid urbanization will translate into the growth of megacities, holding upwards of 50 million people.

By the end of the 21st century, this animation shows that Africa alone could contain at least 13 megacities that are bigger than New York:

By this time, it’s projected that North America, Europe, South America, and China will combine to hold zero of the world’s 20 most populous cities. What other game-changing shifts to human geography will occur during this stretch?

By definition, a consensual and rational trade between two parties is one that makes both parties better off.

Based on this microeconomic principle, and also on the consensus by economists that free trade is ultimately beneficial, countries around the world have consistently been working to remove trade barriers since World War II with great success.

But nothing is ever straightforward, and these long-held truths are now being challenged in both societal and political contexts. We now seem to be trapped in a trade paradox in which politicians give lip service to free trade, but often take action in the opposite direction.

To get a sense of how important trade can be between two nations, we previously documented the ongoing relationship between the U.S. and Canada, in which each country is the best customer of the other: 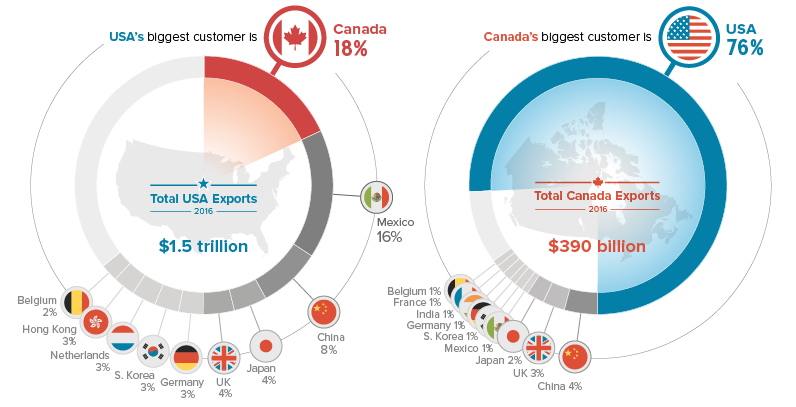 With the recent USMCA agreement, the two countries seem to have sorted their differences for now – but the trade paradox will continue to be an ongoing theme in economics and investing at a global level for many years to come, especially as the trade war against China rages on.