A decade ago Muhammed Bouazizi became the unlikely catalyst for bringing about political change in the Middle East. But a decade on the myriad of economic challenges and political polarisation means little has really changed in the birthplace of the Arab Spring

The temperature in the central Tunisian town of Sidi Bouzid reaches 50 degrees in the summer but a decade ago she was the place that lit the spark for the Arab Spring. On 17 December 2010 Muhammed Bouazizi immolated himself and he became the unlikely catalyst for bringing about one of the most profound changes of the 21st century. Today, Tunisia’s long-term dictator Zine El Abidine Ben Ali is dead, the country has a new constitution, it has reguler elections and has even won a Nobel Peace Prize. The country regularly receives praise from the global media and Western leaders for her transition to democracy. But a decade on, the country’s various governments have all been failures and have struggled to deal with the myriad of economic challenges the country faces. Political polarisation and the fact the old guard are back in power means little has really changed in the birthplace of the Arab Spring. 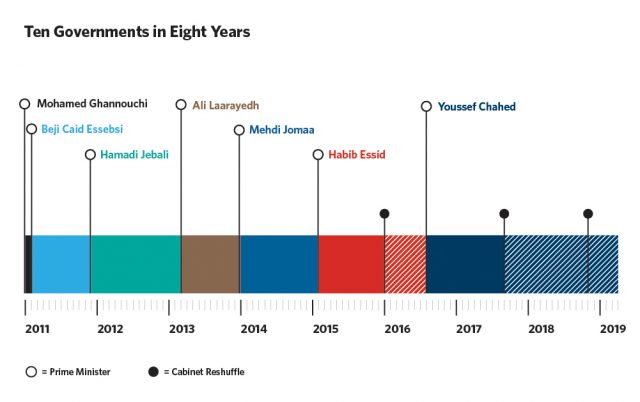 Tunisia was the first country to oust her long-term leader and set about having her first free elections. But in the last decade Tunisia has now had ten different governments, numerous prime ministers, and presidents as all have failed to tackle the problems the country faces. When Ennahdah won a stunning victory in October 2011 by a large margin, the secular forces set about undermining them by accusing them of having an Islamic agenda. Rather than using its position of strength, Ennahdah constantly compromised, but failed to make progress on a new constitution as disputes arose within the ruling coalition and then between modernists and pragmatic groups on the shape and form of the constitution. The previous ruling elite and secular groups on one side and Ennahdah and the new parties on the other, consistently bogged down the political process due to their differences. As a result, little progress was made on key issues. It took three years to agree to a new constitution which maintained much of the pre-Arab Spring system.

Whilst Tunisia gets much media attention for having elections and establishing a new constitution, for the people of Tunisia this means little when there are no jobs, inflation is rampant, and the country lacks security

Ennahdah has been a complete failure due to its pragmatic and short-term thinking as well as its  compromising mentality. Despite winning the elections in 2011 they refused to put forward a candidate for the country’s President, despite having the right to do so. One by one they compromised and then eventually abandoned all pretence to Islamic rule. Despite calling for Islam for decades and despite being propelled to power by the Tunisian people for this, Ennahdah compromised so much to keep all factions happy. It eventually declared it was no longer an Islamic party. Ennahda’s leader, Rachid Ghannouchi explained: “following the revolution of 2011 and the adoption of the new constitution in 2014, there is no reason for a party in Tunisia to refer to the term political Islam. The party would seek to define itself as a democratic and civil movement.”[1] Ennahdah was unable to deal with the country’s economic and security challenges and this saw them lose much of the goodwill they had achieved. By 2013 Ennahdah ceded power realising its days were numbered. Ennahdah presented the impracticality of Islam as a justification for their own failures.

Ennahdah was unable to deal with the country’s economic and security challenges and this saw them lose much of the goodwill they had achieved. By 2013 Ennahdah ceded power realising its days were numbered. Ennahdah presented the impracticality of Islam as a justification for their own failures

The secular parties were leaderless with the overthrow of Ben Ali and were marginalised with the victory of Ennahda. With the people of Tunisia growing frustrated with the delays in the formation of the new constitution, alongside the economic struggles that had persisted since Ben Ali’s presidency. Mat­ters reached boil­ing point in 2013 when Chokri Belaid, a promi­nent sec­u­lar oppo­si­tion leader and oppo­si­tion law­maker Mohammed Brahmi were both assas­si­nated. This trig­gered mass protests and riots across Tunisia. The ongoing demonstrations and public criticism by the secular opposition forced Ennahda to step down in October 2013. Beji Caid Essebsi, the 87-year-old protégé of Habib Bourguiba, and ally of Ben Ali, established the Nidaa Tounes, or “Call of Tunisia,” to gather the secular forces, he eventually became President of Tunisia in 2014, and shockingly Ennahda joined the ruling coalition. The Ben Ali secular forces were back in power.

The secular forces turned out to be as incompetent as Ennahdah. In a 2015 attack on the National Bardo Museum, 24 people were killed and on a separate attack 39 foreigners were killed on a beach resort in Sousse. These attacks eliminated the 15% contribution tourism made to the Tunisian economy. Whilst the secular government declared a state of emergency it had no strategy for dealing with the economic woes. The government did not implement promised reforms and stood by as unemployment continued to rise and inflation reached double digits. By January 2018, the people were back on the streets due to the situation. It was the economic situation that drove Muhammed Bouazizi’s self-immolation and a decade on, these same problems still persist.

A decade on, the birthplace of the Arab Spring presents a bleak picture. Ennahdah failed to lead the masses and the secular groups failed in similar vein. The country’s economic and security problems have worsened as the various factions bicker and accuse each other of having ulterior motives. Whilst Tunisia gets much media attention for having elections and establishing a new constitution, for the people of Tunisia this means little when there are no jobs, inflation is rampant, and the country lacks security. It was these factors that caused the Arab Spring in the first place. As these problems still persist it’s really just a matter of time before the people are back on the streets again, demanding their rights.

Reflections On The Arab Spring, A Decade On

PODCAST: A Decade Since The Arab Spring