Egypt’s President Abdel-Fatah al-Sisi orchestrated and announced the AfCFTA in 2019 when he was the head of the African Union (AU) – now led by South Africa’s President Cyril Ramaphosa. In a speech to his fellow African leaders, Sisi claimed that the AfCFTA “will reinforce our (Africa’s) negotiating position on the international stage. It will represent an important step.”[1] But Covid-19 has not only altered general trajectories but has also precipitated the arrival of a pending global economic crisis. Keeping in mind the heavy losses in advanced regions, Africa is naturally expected to be hit the hardest due to its underfunded, crumpled health care system and precarious economy: Africa’s free trade area may struggle to get off the ground.

The Africa’s Free Trade Area (AfCFTA) agreement aimed to bring all 54 the continent’s nations into the agreement. It is practically an attempt at replicating the European Union’s (EU) model where trade routes are freely roamed between its members. According to Brookings Institute, “By 2030, Africa will have a combined consumer and business spending of $6.7 trillion…,”[2] and the United Nations Economic Commission for Africa (UNECA) “estimates that the AfCFTA has the potential to boost intra-African trade by 52 percent by 2022.”[3] The World Bank believes “The pact has the potential to lift 30 million people out of extreme poverty, increase workers’ wages and generate gains for women.”[4] The deal will also reduces, or remove high tariffs to free the flow of goods and resources among African nations.

Touted as the world’s largest trade deal since the formation of the WTO, the AfCFTA was scheduled to kickstart on July 1st, 2020 but Covid-19 forced its postponement. It is expected to ramp up huge economic profits and lessen the impact of the pandemic on Africa’s fragile economy. This could just be the landmark structure Africa needs to accelerate progress in security, economy, and politics. In addition to growth, the agreement will mitigate GDP downturns from an estimated -7.9% to -4.3% – which is quite huge. The intra-continental trade deal could save the continent export-import costs by about 10% according to the trade’s modality of removing, or easing tariffs.[5] 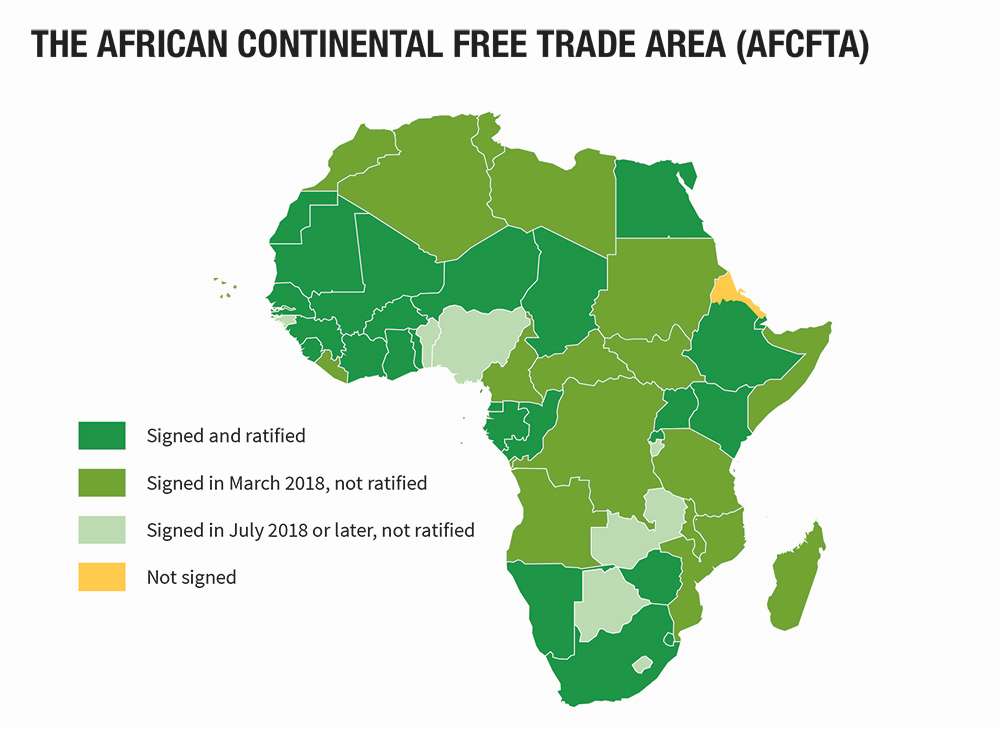 Before popping the cork for jovial celebrations, the success of this seemingly lucrative venture could be hampered by one overwhelming challenge; intrusion by foreign actors. The primary hurdle to every progressive African initiative has always been the continent’s inability to act independently. Over reliance on foreign financial and security aid has been a marked dent on Africa’s development. From the declaration of the ‘Scramble for Africa’ in 1881 to present, Western powers have looted the continent’s resources to their hearts’ content. A major source of the slaves that helped run the flamboyant industrial machinery; Africa has always been up for grasp among world powers. It has once again proven a power-grabbing hotspot now that China continuously makes significant economic strides in it.

Both China and the West, particularly the US, have vested economic interests in Africa and are keen on preserving them. China endeared itself to the continent as a key ally by dishing out low-interest loans, cheap goods and services/labor, and constant donations. A fifth of Africa’s foreign debt – around $55 billion – is said to have come from China5 and this pandemic saw it pour into the continent massive financial and material aid.

The US considers China’s economic success in Africa as a threat to its interests. Although, China has no apparent political ambition in Africa, its inroads and ardent quest for the continent’s natural resources strike at the very heart of US hegemony over both political and economic influence – since it needs the economic aspect as leverage for political bargains. With China stamping all over its vicinity, it is incumbent to quell, or at least contain it.

The continental agreement might very well be a counter-weight to China’s economic expanse in the continent. However, Africa’s textile and electronic industries are rife with Chinese products. The deal will more likely than not involve Chinese money. However, foreign powers can use the deal to influence political outcomes. This explains why Nigeria and others were reluctant to join, despite being one of the continents biggest economies comprising its largest population and city (Lagos).

Egypt’s President Abdel Fatah al-Sisi, the initiator of the pact is a loyal ally of the US, while Nigeria under Muhammadu Buhari is more inclined towards the British. Britain and the US have long ‘scrambled’ and struggled against each other for Africa’s resources. Despite being ‘closest’ allies, both powers are only in for their national interests. Unlike them, China is still a paper dragon and only has economic interest in Africa. The Western powers will surely exploit or sabotage the trade deal through their clients in accordance to their influence.

The million-dollar question is: can African leaders overcome this and pull off such a ground breaking undertaking to mark a positive turning point to their futures? Or will this ‘underlying challenge’ once again prove unsurmountable to the bane of the continent? In addition, how will the AfCFTA be sustained in a continent rife with foreign instigated civil wars and intrusions that mar its stability?

An Intro to Geopolitics

Is the China-Iran Strategic Deal A Game Changer?