By Nick Routley for Visual Capitalist

Billions of dollars routinely flow between countries for a number of reasons that go beyond simply helping people in less wealthy nations.

Extending foreign aid can be a tool to help strengthen relationships with allies, to help bolster a military presence in a key area, or even to project a positive image at home and abroad. Of course, aid also helps less wealthy nations do all kinds of things, from constructing new infrastructure to recovering from humanitarian crises or natural disasters.

Today’s infographic, from Wristband Resources, is a comprehensive look at the flow of foreign aid funds around the world in 2017.

The visualization raises a number of questions. For example:

Below we’ll answer key questions about foreign aid, while examining some of the more interesting relationships in detail.

In simple terms, foreign aid is the voluntary transfer of resources from one country to another country—typically capital. Here are the six types of foreign aid:

Similar to tied aid, but specific to weapons and military supplies

Note: The graphic above measures official development assistance (ODA), as defined by the OECD. ODA excludes military aid and the “promotion of donors’ security interests” as well as transactions that have primarily commercial objectives.

Which Countries Give the Most Foreign Aid?

Every country’s budget is different, and priorities can change as the economic and political cycles progress. As of 2018, here are the countries that contributed the most foreign aid as a portion of their Gross National Income (GNI). 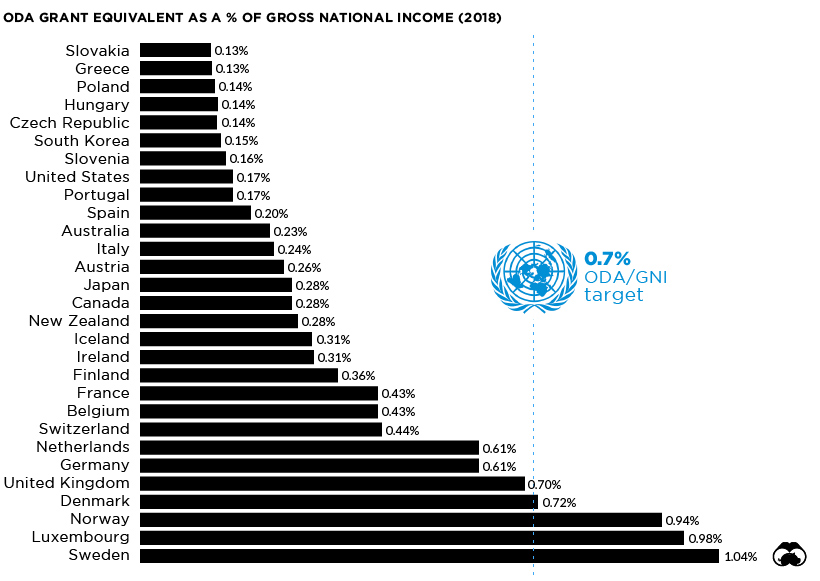 In a 1970 resolution, the UN challenged countries to spend 0.7% of their GNI on foreign aid. Today, only four countries—Sweden, Luxembourg, Norway, and Denmark—surpassed the United Nations’ official development assistance target.

Using this measure, all top 10 countries are located in Europe. That said, in absolute terms, countries like Japan and the United States are still major contributors of aid around the world.

Below are a few real world examples of foreign aid flow, and more context around why money is flowing between the countries.

India is the top recipient of foreign aid, with the majority of funds coming from Japan. The country received close to $2.4 billion from Japan in 2017.

In recent years, the growth of Japan-India relations is viewed as a counter to China’s expanding economic and political influence across the Asian continent. As China’s national banks continue to fund megaprojects around the world, Japan is helping to fill a similar role in India.

One major project currently under construction is the Mumbai–Ahmedabad High Speed Rail Corridor. To move the $22 billion project forward, Japan offered India a 50-year loan at a 0.1% interest rate, covering 80% of the project cost.

European institutions contributed nearly $2.6 billion to Turkey in 2017. On the surface this may seem confusing, as Turkey is more developed than most nations receiving foreign aid—however, much of this funding stems from the migration crisis. In 2016, the EU struck a deal with Turkey to reroute any migrant arriving in Europe via the Aegean Sea back to Turkey. In exchange, the EU agreed to fast-track Turkey’s EU membership bid.

Turkey has been bearing the brunt of caring for refugees, and the EU has contributed significant funds to the effort. For example, funding for the Emergency Social Safety Net (ESSN) program in Turkey has reached $1.2 billion.

In 2017, Ethiopia was under a state of emergency as the African country faced a third straight year of drought, and security forces and anti-government protesters clashed in the streets. Though the U.S. does provide plenty of military and security-oriented aid, this is an example of humanitarian aid in the face of a crisis.

The United States was also the top source by far for aid flowing into other countries in the region, including Kenya, Tanzania, and South Sudan.

Is the US-Turkey Relationship in Turmoil?