During a July 19th meeting, US president Donald Trump repeatedly suggested that Defense Secretary James Mattis and Chairman of the Joint Chiefs of Staff Gen. Joseph Dunford replace Gen. John Nicholson, the commander of US forces in Afghanistan, because he is not winning the war. Over nearly two hours in the situation room, according to officials, Trump complained about NATO allies, inquired about the United States getting a piece of Afghanistan’s mineral wealth and repeatedly...
15th August 20177 min

During a July 19th meeting, US president Donald Trump repeatedly suggested that Defense Secretary James Mattis and Chairman of the Joint Chiefs of Staff Gen. Joseph Dunford replace Gen. John Nicholson, the commander of US forces in Afghanistan, because he is not winning the war. Over nearly two hours in the situation room, according to officials, Trump complained about NATO allies, inquired about the United States getting a piece of Afghanistan’s mineral wealth and repeatedly said the top US general there should be fired. “We aren’t winning,” Trump complained, according to officials. “We are losing.”[1] Trump is now the third president to grapple with what is now officially America’s longest ever war — longer than WW1 and WW2 combined. Former presidents Barack Obama and George W. Bush went through multiple strategies over the course of their presidencies to try to stabilize Afghanistan, but Trumps team have struggled to come up with a strategy. The US is now the newest addition to a growing list of empires that faced and failed to overcome many of the same challenges that have repelled invaders for centuries in the country.

Afghanistan has a population of nearly 33 million. The country is made up of rugged mountainous terrain, with deep valleys. The country could really be described as having mountains in its centre, surrounded by countryside and desert. It is this terrain that previous empires always succumbed to. The US military, when it began its invasion in 2001 consisted of around 1.5 million active-duty personnel (plus 980,000 in the reserves), of whom more than 550,000 belonged to the Army and about 200,000 were part of the Marine Corps. Afghanistan on the other hand had no army, it had militias who had been at war with each other since the Soviets departed in 1989. The Taliban government possessed ageing Soviet tanks, as well as some aging soviet aircraft, at best on the eve of the US invasion the Taliban, who numbered somewhere between 20,000 — 30,000 personnel, possessed an amateur force, with little conventional capability. 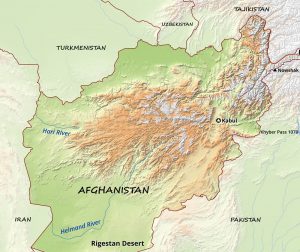 The odds were firmly stacked in America’s favour in 2001, but this was the first lesson the US overlooked in its invasion. Like all the empires before them who invaded Afghanistan, more troops in this case is not an advantage. Like all empires, the US strains to deploy large numbers of its military at any one time and in the last decade the US was fighting in two wars in Afghanistan and Iraq. To maintain such a large force, far from the US continent many of these troops were needed in support rather than combat roles. The same was true in Vietnam, where the US was challenged to field a maximum of 550,000 troops (in a country much more populous than Iraq or Afghanistan) despite conscription and a larger standing army. With the war in Afghanistan the US is fighting in the Eastern Hemisphere, this is a great distance from the US continent and the greater the distance, the greater the logistical cost. More ships are needed to deliver the same amount of material. This absorbs many troops. The logistical cost of fighting at a distance is that it diverts numbers of troops disproportionate to the size of the combat force. Regardless of the number of troops deployed, the US military is always vastly outnumbered by the populations of the countries to which it is deployed. If parts of these populations resist as guerrilla forces or employ guerrilla tactics, the enemy rapidly swells to a size that can outnumber US forces, as was the case in Vietnam. The Soviets maintained a force of around 115,000 troops in Afghanistan in their decade long war and failed to conquer the country.

The US, like its predecessors always had a disadvantage when it came to intelligence. The Afghan people have shown for over two centuries that it can be outnumbered and outgunned but still bleed empires dry. The US failed to realise the resistance is fighting at home. It understands the terrain. The US is fighting in an alien environment. It is constantly at an intelligence disadvantage. That means that the effectiveness of the native forces is multiplied by excellent intelligence, while the effectiveness of US forces is divided by lack of intelligence. The US, being the most technologically advanced military in history compensates for areas where it lacks the advantage with technology, from space-based reconnaissance and air power to counter-battery systems and advanced communications. But these require massive diversions of manpower from ground-combat operations. Having identified the enemy, the US can overwhelm it with firepower. The problem the US has in Afghanistan and in Iraq was finding the enemy and distinguishing it from the general population. As a result, the US is well-suited for the initial phases of combat, when the task is to defeat a conventional force. But after the conventional force has been defeated, the resistance use tactics difficult for American intelligence to deal with. The enemy can then control the tempo of operations by declining combat where it is at a disadvantage and initiating combat when it chooses. The Soviets struggled with the same reality and the US has fallen into the same quagmire. The US faces an insurgency in Afghanistan and this requires counter insurgency forces not the conventional army, who require bases and significant supply lines. Maintaining both fixed and rotary wing aircraft require dozens of ground-crew personnel, despite their appearance of power, these systems rely on extensive ground-support to just be in the air for short periods. If we add the need to train, relieve, rest and recuperate the ground-combat forces, you are left with a small percentage available to fight.

The US has fallen victim to the same reality both the Soviet Union and Britain befell previously and that is an invading force, in the long run will ruin itself in attempting to conquer Afghanistan

The capitulation of Germany and Japan in World War 2 are usually cited as examples of the US defeating and pacifying an opposing nation. Germany was not defeated by US forces. The back of the German ground forces and Wehrmacht was broken by the Soviets in the Eastern front i.e. on their own soil with the logistical advantages of short supply lines. Britain and numerous other countries were also involved. It is extremely unlikely the Germans would have capitulated to the Americans alone. The force the United States deployed was insufficient to defeat Germany. As for Japan, it was not ground forces but air power, submarine warfare that finished them as well as the emperor’s willingness to order a surrender. It was not land power that prevented resistance but air and sea power, plus a political compromise by MacArthur in retaining and using the emperor. Had the Japanese emperor been removed the occupation of Japan would have been much more costly. Neither Germany nor Japan are examples in which US land forces compelled capitulation and suppressed resistance. The problem the US has in the Eastern Hemisphere is that the size of the force needed to occupy a country initially is much smaller than the force needed to pacify the country. The force available for pacification is much smaller than needed because the force the United States can deploy without committing to total war is simply too small to do the job. As a nation with global aspirations it has too many issues to deal with and be prepared for — and the size needed to do the job is even beyond US capabilities.

The US has fallen victim to the same reality both the Soviet Union and Britain befell previously and that is an invading force, in the long run will ruin itself in attempting to conquer Afghanistan. If there were a solution to this, it would have been implemented long ago by US policy makers and we would not be writing about the 17th year of a US foreign military invasion. America has shown it can destroy regimes but its nation building capabilities are usually a failure. US president Donald Trump now needs to decide to continue pacifying Afghanistan and continue to lose troops in a war that cannot be won or cut its losses and pull out as it did in Vietnam. If it does this the government in Kabul would collapse and what would be left is civil war. This has usually been the case when the superpower invaded Afghanistan and eventually cut its loses and ran.

The Geopolitics of Egypt