By Dahnish Chowdry On Monday the 25th January 2016 the Egyptian revolution, that managed to oust long-serving, brutal dictator Hosni Mubarak, witnessed its fifth anniversary. Since then Egypt hosted its first democratic elections which brought into power the Muslim Brotherhood (MB), a political party which began as an Islamic revivalist movement in the late 1920’s under the tutelage of the charismatic figure of Hassan al Banna.[1] But today,  Egypt is once again on the cusp...
27th January 20164 min 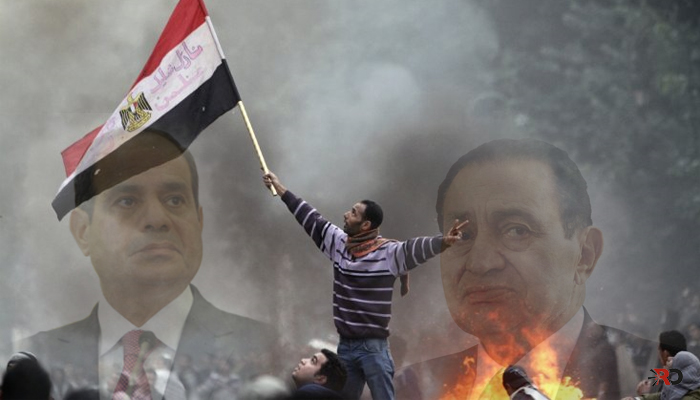 On Monday the 25th January 2016 the Egyptian revolution, that managed to oust long-serving, brutal dictator Hosni Mubarak, witnessed its fifth anniversary. Since then Egypt hosted its first democratic elections which brought into power the Muslim Brotherhood (MB), a political party which began as an Islamic revivalist movement in the late 1920’s under the tutelage of the charismatic figure of Hassan al Banna.[1] But today,  Egypt is once again on the cusp of chaos, with the Egyptian regime resorting to brutal methods to remain in power. Abdul Fattah Al-Sisi now finds himself in the same position as Morsi and Mubarak – unpopular and incompetent.

The MB under the leadership of Muhammed Morsi failed to solidify the divide between the people and the state that had existed during the period of Hosni Mubarak but predated him to the British colonial period. Instead the party focused on solidifying their political control rather than focusing on tackling the growing unemployment, inflation and poverty crisis, with poverty said to have risen from 40% to 50% (those living on less than $2 a day) post revolution.[2] The MB’s lack of political vision combined with economic mismanagement and constant demands for handouts from various regional states and the International Monetary Fund (IMF) in order to resuscitate the economy, ultimately defined their rule. The divide between the state and the people inevitably caused the Egyptian populace to return to the streets, this time calling for the removal of their democratically elected leader.

A coup d’état took place in July 2013, overthrew Muhammed Morsi. The leader of the coup, ironically was Abdul Fattah Al-Sisi, the man whom Morsi had placed in charge of the military a year earlier, in order to solidify his own position and political power. By March 2014, Sisi was inaugurated as the new Egyptian president with widespread international support and began following in the footsteps of Hosni Mubarak. With military rule effectively restored in Egypt, Sisi wasted no time in silencing his critics with the same brutality of Mubarak’s era, imprisoning, executing and torturing his political opponents, with the MB bearing the brunt of the new dictator’s tyranny. The Human Rights Watch estimated that between 2013 to 2015, 1250 MB supporters had been killed, with a further 547 being executed following a trial through a military court.[3] Sisi also issued new “anti-terror” laws, however these laws were specifically used to create an atmosphere of fear and to protect his own position by silencing his critics under the guise of terrorism.

But Sisi, despite having much support when he overthrew the MB, now finds himself in the same position as his predecessors. With an economy in crisis due to rising inflation and unemployment, youth unemployment is increasing; almost half of all youth are unemployed.[4] More Egyptian youth are entering the workforce each year then there are jobs for them. Although there has been an announcement of the Suez Canal expansion under Sisi’s tenure, it will do little to alter this fact but in the long term it could increase the dependency the Egyptian economy has on the revenues generated by the canal, making it more susceptible to external shocks. There has also been the announcement of the New Cairo Project in March 2015, a project where Egypt plans to build a new capital that will house almost five million people and cost around $30 billion,[5] with Egyptian authorities even claiming it will be built in just over half a decade. But this is all taking place with even the business class of Egypt losing faith in Sisi,[6] the announcement of the project is unsurprising and can be seen as an attempt to restore confidence in Sisi’s leadership, which is becoming increasingly fragile. Sisi himself announced his fears in December 2015 when he questioned the calls for protests, even stating that they will lead the country to ruin.[7]

Sisi has failed to win the confidence of the people, he has failed to revitalise the Egyptian economy and he has failed to solidify his political control despite utilising draconian policies.  With the return of military rule in Egypt, the future of the country is looking increasingly unstable. The Arab spring and then the ousting of Morsi has given the Egyptian people the belief that they can bring real change. Sisi has failed to bridge the divide between the state and the people much like his predecessor Morsi, as a result his grip is weakening and it looks likely that the Egyptian population will be out in the streets again in their thousands to protest against the military dictator. Throughout the post Sykes-Picot period, the Egyptian population has been continuously duped by its leaders.  However, they now realise the ability they have to remove those that fail the country. With Abdal Fattah Al-Sisi most likely to be in the line of an increasing number of ousted leaders in the short history of the Arab Spring. Perhaps then, it is more correct to view the Arab Spring as just a tremor before the actual earthquake to come.

The Arab Spring: 5 years on