Muhammed Ubaid On the 3rd December, the British parliament voted overwhelmingly to expand British airstrikes from Iraq into Syria.[1] The attacks in Paris and the potential threat to the UK were used as the primary justification. Within hours, British Typhoons began attacking targets and oil fields in Syria. Not to be left behind, the German parliament approved airstrikes against Syria on Friday 4th December.[2] With all the world powers and regional powers now involved in...
10th December 20156 min 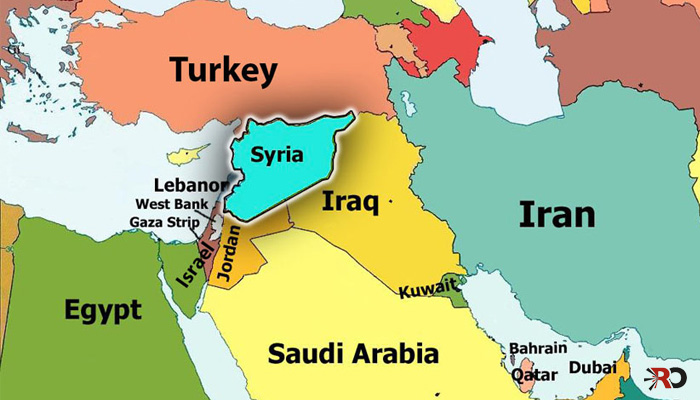 On the 3rd December, the British parliament voted overwhelmingly to expand British airstrikes from Iraq into Syria.[1] The attacks in Paris and the potential threat to the UK were used as the primary justification. Within hours, British Typhoons began attacking targets and oil fields in Syria. Not to be left behind, the German parliament approved airstrikes against Syria on Friday 4th December.[2] With all the world powers and regional powers now involved in Syria, anyone would be forgiven for believing World War Three was in full swing. It begs the question what is the importance of Syria that has attracted the world’s powers to it.

Throughout history, Syria was part of the Levant and the Levant has consistently played an important role from the medieval period to the current day.  For the Byzantines the Levant formed the area surrounding the political capital, Constantinople and became the gateway to other lands. The Levant was also the area where the Muslim world met the Christian world. Key encounters with the Byzantine Empire took place in the Levant. The Crusades, which came to define Muslim-Christian relations for centuries, saw the Levant as an important area and one that needed to be occupied due to it being the gateway to the rest of the Caliphate.[3] For Muslims, the Levant holds significant veneration as it was blessed in the Muslim scripture – the Qur’an. Therefore events that take place in this region have a profound effect on Muslims across the world.

[pullquote align=”left” color=”” class=”” cite=”Walid Al-Moallem, Syrian foreign minister” link=””]   We know that those who plan evil for Syria and those who demand the estab­lish­ment of the Islamic Khi­lafah state will not stop at the bor­ders of Syria. So what we are cur­rently doing is even defend­ing Jor­dan, Lebanon and Turkey.” [/pullquote] It was France with Britain that constructed the borders of the Middle East in the Sykes-Picot treaty during WW1. Syria was engineered by the French and organised on a sectarian basis to keep the people divided, so the French could maintain their grip on power. The French largely supported the minority populations within Syria, over the overwhelmingly Muslim population that constituted 78% of the total Syrian population. Most notably the Nusayris were brought to power as a minority that lived for centuries in obscurity in the mountains of Latakia. The French even changed their name to the ‘Alawis’ to give them legitimacy (in line with Imam Ali (RA), who was the fourth Caliph, the Prophet’s cousin and one of the first converts to Islam). It was such policies that allowed the Alawis to join the army, police and intelligence services. This domination set up the coup in 1963 when the Alawi dominated Baathists took power.  Despite Syria consisting of a population of 78% Muslims, the minority Alawis made up the ruling elite. The Alawi’s theoretical links with the Shi’ah led to Iran and Syria working closely to extend their influence within the region and ideas such as a Shi’ah crescent continue in the lexicon of the region.

The importance of Syria is not due to its resources, as is the case with much of the region, but due to its geopolitical importance i.e. its location. Relative to the region, Syria possesses few gas and oil fields and even fewer reserves of energy. Syria, in the Sykes-Picot agreement during WW1, was given borders much smaller than it previously had as Al-sham. However its central location in the Muslim world makes it the heart of the Middle East. This makes the Alawi minority in control of Syria even more significant. This is why the British and Americans fought over control of the country with multiple coups and counter coups. The Al-Sham region included Palestine and Lebanon and it was only after the end of the decline of the Caliphate that the French and British constructed what we see today in the region. Syria borders Israel, which is a key tool for the US in protecting its interests in the region. Syria being at war with Israel would expend considerable Israeli resources so having a regime in Damascus which is friendly with Israel would secure and protect the Zionist state.  The seizure of Lebanon in 1975 for 30 years by Syria shows it can influence the politics of another country which also shares a border with Israel. So due to being at the heart of the Middle East and the Arab world, having influence over Syria will help in securing dominance of the region.

As the Arab spring closes in on its fifth anniversary, the implications of what happens to Syria remains at the forefront of the regional and global powers. For the US, change means the overthrow of the Ba’athist regime and the emergence of an alternative government from the majority population to something in line with their values.  One need only read US news­pa­pers, which consistently cite anony­mous White House offi­cials objec­tively sup­port­ing Assad’s longevity. Syria has been a lynch­pin of pro­tect­ing US inter­ests in the region and the US would want to main­tain the regime in order for it to carry on in this role. Bashar and his father acted as a pro­tec­tive agent for Israel as it has pro­tected the Syrian-Israeli bor­der so well that numer­ous Israeli gen­er­als launched oper­a­tion “save the Assad regime.” This prompted Israeli gen­eral Azer Tsfrir, to explain that allow­ing the Assad regime to fall would mean turn­ing Syria into a “black hole” in which the bor­der areas could become launch pads for oper­a­tions against Israel.”[4] Walid Al-Moallem, the al-Assad regime’s foreign minister outlined in 2013 what was at stake in the coun­try and the region, he said: “We know that those who plan evil for Syria and those who demand the estab­lish­ment of the Islamic Khi­lafah state will not stop at the bor­ders of Syria. So what we are cur­rently doing is even defend­ing Jor­dan, Lebanon and Turkey.”[5] Real change in Syria would mean a new independent state at the heart of the Middle East, one that could reunify with the lands in all directions.

With many of the Arab spring nations going back to the pre-Arab spring systems or marred in civil war, the Syrian revolution is considered by all to be very different from all the other revolutions. Unlike countries like Egypt and Tunisia, who identified their rulers as the main problem, the people of Syria have identified the regime and the system in place as the fundamental problem. This is why any proposed solution such as negotiations with the Syrian National Coalition and Bashar al Assad himself has failed. The Syrian rebels instead continue to fight and continue to call for the collapse of the regime. This poses a number of problems for Western nations, as the regime in Damascus has been a lynchpin for them. This explains why Russia openly supports the regime in Damascus and the US, whose lack of action demonstrates its implicit support for the regime. The Russian foreign Minister, Sergei Lavrov confirmed what was at stake in Syria: “It’s dangerous. They want to build a caliphate from Portugal to Pakistan taking everything in between.”[6] It is this fear that makes the outcome of Syria so important.