In the early part of the twentieth century, Britain was at the forefront of Western efforts in moulding the Muslim world. Almost a century later, nothing has changed. The West has embarked upon a new campaign to remake the entire Middle East in its image. America is leading a pack of colonial powers in this endeavour and is spearheading efforts in the Middle East. The US campaign started with the separation of oil rich Southern...
19th July 20154 min

In the early part of the twentieth century, Britain was at the forefront of Western efforts in moulding the Muslim world. Almost a century later, nothing has changed. The West has embarked upon a new campaign to remake the entire Middle East in its image. America is leading a pack of colonial powers in this endeavour and is spearheading efforts in the Middle East.

The US campaign started with the separation of oil rich Southern Sudan in 2011. This model appears to be the strategy the US will pursue for the foreseeable future. The secession of South Sudan under American tutelage spurred Christians in Nigeria and Coptic Christians in Egypt to demand independence. The aspirations of the Coptic leaders were lucidly captured by a Jewish Journalist Oded Yinon in 1982. In his paper, “A strategy for Israel in the nineteen-eighties,” he stated: “Egypt is divided and torn apart into many foci of authority. If Egypt falls apart, countries like Libya, Sudan or even the more distant states will not continue to exist in their present form and will join the downfall and dissolution of Egypt. The vision of a Christian Coptic state in Upper Egypt, alongside a number of weak states, with very localized power and without a centralized government as to date, is the key to a historical development which was only setback by the peace agreement, but which seems inevitable in the long run.”[1] The idea of creating a sacred Coptic state within the contours of Egypt is similar to the one advocated by US Lieutenant-Colonel Ralph Peters concerning Makkah and Madinah. In June 2006, Peters published a map of the “New Middle East” in the June edition of the US Armed Forces Journal. The journal depicted amongst other mutilated Muslim countries the “Islamic Sacred State,” which consists of Mecca and Medina segregated from the rest of Saudi Arabia. 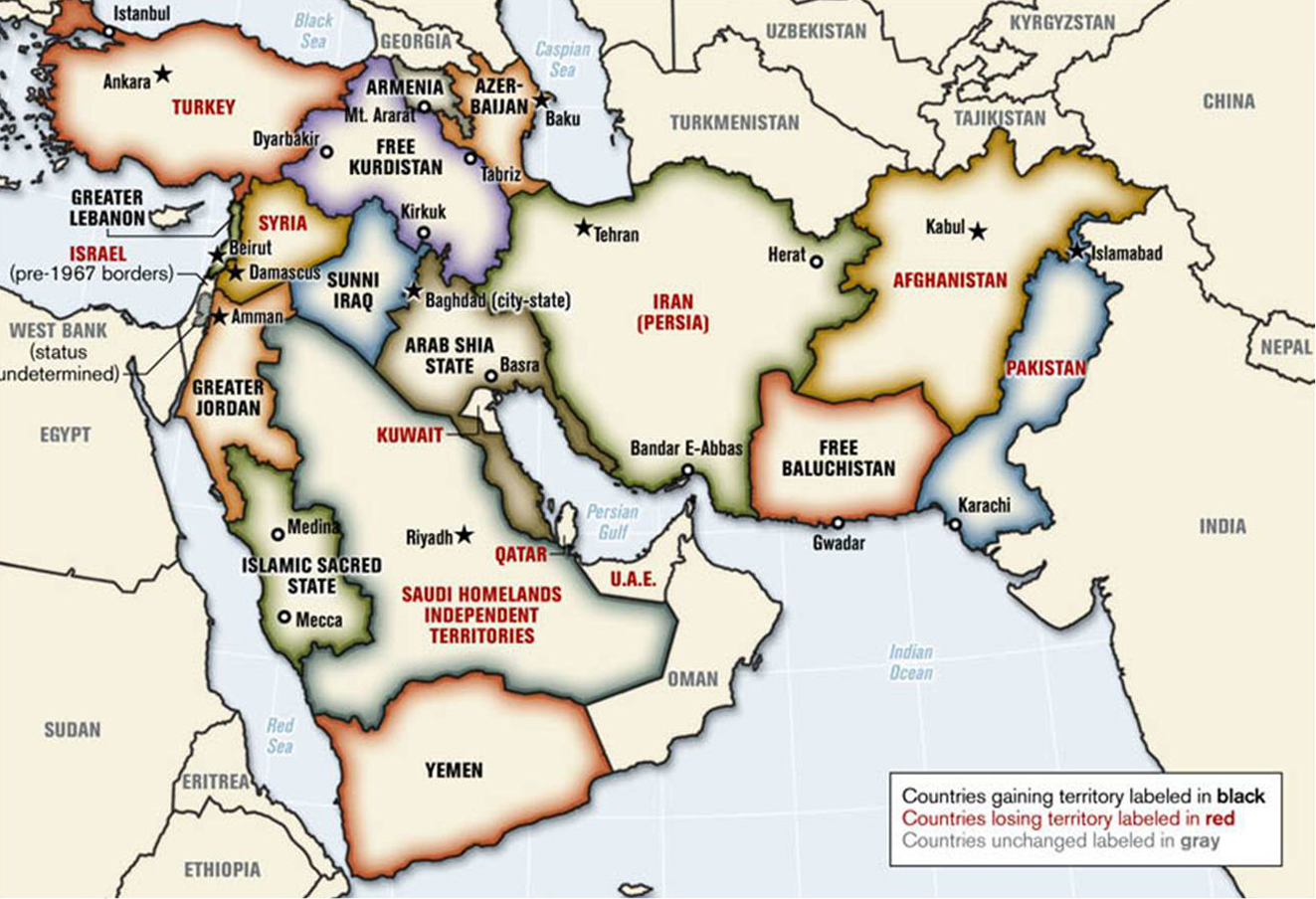 Even before, various US officials played upon sectarian and ethnic differences, and called for the creation of a super Shia state that stretches from Lebanon to Pakistan. With US-Iran relations as they are, the creation of such an entity would shift the control of oil away from Sunni domination into Shia hands. The American occupation in Iraq was viewed by some Middle Eastern leaders, as the first step towards Shia domination of the whole region. Jordan’s King Abdullah warned: “If pro-Iran parties or politicians dominate the new Iraqi government a new “crescent” of dominant Shiite movements or governments stretching from Iran into Iraq, Syria and Lebanon could emerge, alter the traditional balance of power between the two main Islamic sects and pose new challenges to US interests and allies.”[2] He further went to state that Iran was the main beneficiary from the chaos in Iraq. Ever since the Shia’s rose to power in Iraq, King Abdullah has oft repeated that America’s occupation of Iraq is bolstering Shia power across the region.

American officials have resurrected outdated plans to devour the Arab world once deemed too ambitious to accomplish and too dangerous to talk about in public. In January 2011, US Secretary of State Hillary Clinton could not hide her glee and used the events in Tunisia to fire a salvo at the pro-European Arab leaders. She said: “In too many places, in too many ways, the region’s foundations are sinking into the sand. The new and dynamic Middle East … needs firmer ground if it is to take root and grow everywhere. While some countries have made great strides in governance, in many others, people have grown tired of corrupt institutions and a stagnant political order. Those who cling to the status quo may be able to hold back the full impact of their countries’ problems for a little while, but not forever. If leaders don’t offer a positive vision and give young people meaningful ways to contribute, others will fill the vacuum.”[3]

The term employed by successive American administrations to describe the plight of the Middle East, such as “sinking in the sand,” “arc of crisis,” “balkanization,” or “Greater Middle East Initiative (GMEI),” was done in an attempt to move away from the Sykes–Picot Agreement, which protected old Europe’s supremacy and interests, a colonial legacy which still persists today—albeit in parts. The war in Iraq in 2003 was a desperate bid by Bush and his cabal of neoconservatives to refashion the Middle East through force. Whilst the US campaigns against the Sykes-Picot borders, it has its own grand plans to further divide the region and create newer, artificial and unviable states, which will require external help for their survival, something the US is more than willing to provide.

The Future of the Middle East: Social Cohesion

The Future of the Middle East: Demographics