By Adnan Khan Two recent announcements by US officials regarding operations in both Iraq and Syria suggest significant inroads are being made to reverse the gains ISIS has made. The US and Turkey signed an agreement 19th Feb to train and equip Syrian opposition fighters. The US embassy in Ankara confirmed that both countries would train and equip rebels, after they have been vetted using information from government databases and the intelligence of regional powers.[1]...
4th March 20156 min 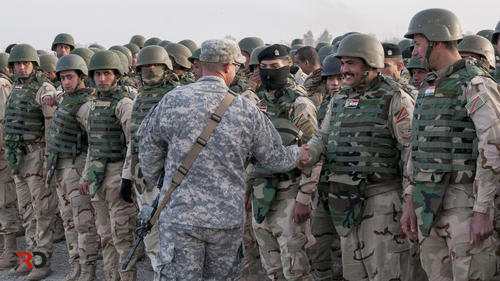 Two recent announcements by US officials regarding operations in both Iraq and Syria suggest significant inroads are being made to reverse the gains ISIS has made. The US and Turkey signed an agreement 19th Feb to train and equip Syrian opposition fighters. The US embassy in Ankara confirmed that both countries would train and equip rebels, after they have been vetted using information from government databases and the intelligence of regional powers.[1] On the same day the US Central Command, which is responsible for military operations in the Middle East, unusually, gave details of the US led plans to take back Mosul. In the briefing a military official confirmed the launching of an offensive by April or May 2015, with an Iraqi security force consisting of 20,000-25,000 troops.[2] Considering how Iraqi forces capitulated against ISIS in June 2014 this is a significant development, made even more significant as the Iraqi government launched a huge 27,000 troop assault on 1st March to take back Tikrit, in its largest operation yet.[3] But on closer inspection most of this is mere noise as serious problems exist in the capabilities of both Iraq and Syria.

The US central command highlighted a force consisting of 20,000-25,000 troops to advance from the

south to retake Mosul while Kurdish peshmerga forces contain the city from the west, north and east. But all the factions who will be part of the invasion have raised doubts about their own capabilities. Iraqi commanders, soldiers and police officers who would play a central role in any offensive have stated the Iraqi army has struggled to recapture even smaller towns that pose less of a challenge than Mosul. Bayan Sami Abdul Rahman, the Kurdish representative to the US confirmed: “The Iraqi Kurds were “surprised” by US Central Command announcement that an attack on Mosul could take place in April or May,” she cautioned that the Iraqi army wouldn’t be ready and that Sunni tribes weren’t united in how to deal with the aftermath if Iraqi forces do manage to take back Iraq’s second largest city.[4] The Kurdish Prime Minister Nechirvan Barzani said he did not think the Iraqi army would be ready before May to take back Mosul. In an interview with Reuters, he said the two best Iraqi divisions are currently protecting the capital and there were not sufficient sources to replace them should a Mosul offensive begin.[5] Such skepticism resulted in US officials admitting it is unlikely to be able to train enough troops in time.[6]

The US-Turkey deal is also precarious. The deal is actually an expansion of the CIA-led training of Syrian rebels, which the US began covertly in March 2013 in Jordan. In October 2014, it was announced that the project would be escalated and a parallel Pentagon programme established.[7] The Turkey deal formalises plans for one of four known sites to be used in a broader program to train Syrian rebels alongside locations in Saudi Arabia, Qatar and Jordan. The plan is to train about 5,000 Syrian fighters a year for three years under the programme. Turkey, Saudi Arabia, Jordan and Qatar will select the Syrian rebels following its own vetting process to train 1,500-2,000 rebels per year for three years. This is not the first time that the US has involved itself in the training of Syrian rebels. The US and the regions rulers have already carried out smaller train and equip programs through the CIA. The results, however, have been poor. The rebel groups the US backed were overrun by or decided to join the Islamic fighters who dominate the conflict. The groups the US, Turkey, Saudi, Qatar and Jordan have supported have either been eclipsed by the firepower of Bashar al Assad’s forces or Jabhat al-Nusra. The new Pentagon programme aims to redress this.

The Iraqi government offensive to take Tikrit is in reality an Iranian operation. Most of the troops involved are Iraqi Shia militia – organised, trained, armed and advised and mostly led by Iranian officers. Gen Qasem Soleimani, commander of the Iranian Revolutionary Guards’ (officially an international terrorist organization that organizes pro-Iran armed groups outside Iran) is overseeing the operation.[8] The attack on Tikrit began March 1st when 27,000 troops and militia advanced in three columns. After three days the attack force moved into the suburbs of Tikrit and recaptured some villages. The main battle will be in Tikrit itself, for which the Iraqi army is no in position to handle due to large-scale urban warfare. The Iranian militias are mostly trained for guerrilla warfare that means taking a lot more casualties to advance. These militias are trained to view this war as a Sunni-Shi’ah war in which martyrdom is victory. As ISIS are also trained in the same way an epic bloodbath will most likely take place, made even more horrific by mass murder of civilians.

The way the US constructed the architecture of Iraq after the overthrow of Saddam Hussain means that the differences between the Sunni, Shi’ah and Kurds constantly threaten it. The Iraqi government which is dominated by Shi’ah factions fears that the Kurds plan to take control of Mosul once ISIS is driven out. The Baghdad governments paranoia has resulted in it withholding the Kurdish share of oil income and weapons the government is receiving to help fight ISIS. It should be remembered that the tribes in Anbar province supported ISIS initially against the Malaki government, due to the oppression they faced. The Abadi government is trying to win them over, but little progress has been made. Like the US prepared the Sunni awakening councils to destroy Al Qaeda in 2006, it will need a similar strategy this time and this announcement of taking back Mosul was in all likelihood the first aspect of this strategy.

Despite some success in the northern Kurdish areas and around Baghdad the Iraqi forces, be they the nation’s army or the Kurdish forces, have no ability to launch large scale conventional operations. The Kurdish forces are a mere 24 kilometres north of Mosul but and do not want to advance further, recognising their limited capabilities. The situation of the nation’s army is far worse. Too often the Kurds have seen the army flee when fighting ISIS leaving nearby Kurds to take care of the mess. Add to this corruption, insufficient training and incompetent commanders and you have a mess that will take years to fix. This explains why the US has not invested more real estate in both Syria and Iraq and maintained largely an air presence. Any capitulation of ISIS would result in a bigger mess as each faction attempts to pick up the pieces. In the end despite these grandiose announcements a war involving so many different factions will take years to resolve; battlefield capabilities delay and cancel any potential push in both Syria and Iraq.

Who's who in Libya

The Arab Spring - 4 Years on