This special report from RO analyses the background and emerging trends from the uprising in Iraq. Part 1 looks at the background and conditions that have led to the uprising. By Idrees Devries Since the beginning of 2014 the central government of Iraq has slowly but steadily lost control over substantial parts of the country. On the 4th of January 2014 rebels took control of Fallujah and parts of Ramadi. The Iraqi army fought back,...
23rd June 201492 min 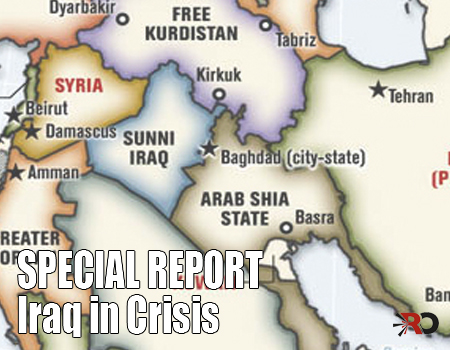 Since the beginning of 2014 the central government of Iraq has slowly but steadily lost control over substantial parts of the country.

On the 4th of January 2014 rebels took control of Fallujah and parts of Ramadi. The Iraqi army fought back, but the rebellion nevertheless spread both northwards and westwards, until on the 10th of June the Iraqi army abandoned its bases in and around Mosul and Tikrit in the north of the country and had to begin preparations to defend the capital Baghdad against an approaching rebel army.

In the international media the Al Qaeda spin-off “Islamic State of Iraq and Syria (ISIS)” is portrayed as the driving force behind this rebellion. While the analyses of the events are multiple, there is no agreed upon conclusion. Some analysts see the events in Iraq as an American victory, believing the rebels are “on the payroll of America”. [1] Others believe the events indicate a failure on the side of America to execute its plans for Iraq, or in other words an American defeat against its arch-enemy for the last 13 years Al Qaeda. [2] Again others see the events as a proxy war between regional players, i.e. something America has no relationship with. [3]

Since events are still developing and facts are relatively scarce, it is almost impossible to determine if there really is an “invisible hand” behind what is commonly called the “ISIS Revolt” in Iraq, let alone who this “hand” belongs to (assuming it exists…).

The background to the current uprising

Anbar province, where the current revolt began, has been a centre of conflict since the Americans invaded Iraq back in 2003.

Much of the resistance against the American presence in Iraq found its origin amongst the Sunni tribes that inhabit Anbar.

Partly because of this, when Al Qaeda began to organize in Iraq to fight the Americans, it also set up base in Anbar. [4] With the help of Syrian intelligence Al Qaeda fighters from all over the world travelled first to Syria and from there across the border into Anbar to launch a devastating offensive against the Americans. [5]

This lead to the Americans launching a number of major military operations in the province. Both in 2004 and again in 2006 there were major assaults on the cities of Fallujah and Ramadi. [6] None of these operations had the success America had hoped for, however, as they failed to bring full American control over the province. As things turned out, it would take an Al Qaeda defeat to achieve this goal rather than an American victory.

At a certain stage during the Iraq War a rift developed between the global leadership of Al Qaeda, Osama bin Laden en Ayman al Zawahiri, and the local leader of Al Qaeda in Iraq Abu Musab Al Zarqawi. Basically, Bin Laden and Al Zawahiri ordered Al Zarqawi to stop attacking Shi’a shrines and cultural centers. The focus of Al Qaeda in Iraq was to be on fighting the Americans and their agents in Iraq, whether Sunni or Shi’a, with the aim of expelling them from Iraq such that the Muslim there could take control over their own destiny. The war was not to be a sectarian pitching Sunni Muslims against Shi’a Muslims. Al Zarqawi, however, had his own plans and the difference of opinion between the global and regional leadership of Al Qaeda lead to Al Qaeda in Iraq breaking off from the global Al Qaeda organization. Al Qaeda in Iraq then rebranded itself into the “Islamic State of Iraq (ISI)”. [7]

The ISI made a major tactical mistake when it began to focus on controlling parts of Anbar province, and running it like a fiefdom, rather than fighting the American occupiers and the illegitimate government it had established in Baghdad. It extracted taxes from local businesses to fund their operations and began to fight whomever would submit to them, including other groups resisting the American presence. In addition, when ISI did fight the occupation, more often than not large numbers of innocent civilians got killed. These behaviors lead the Sunni tribes of Anbar to turn against ISI. They united in what eventually became known as the “Sahwa Movement” to remove Al Qaeda from Anbar. Based on the idea that the “enemy of my enemy is my friend”, the Sahwa Movement collaborated with the Americans and the government they had established in Baghdad for this purpose. By 2009, the partnership had essentially removed the influence of ISI in Anbar province, after which the Americans withdrew their army from the area and the Iraqi army and police took over the responsibility for controlling the area. [8]

Shortly after the power transition, however, new troubles began to emerge in Anbar. During the uprising against ISI the fighters of the Sahwa Movement had been paid by the American military. Part of the deal behind the cooperation between the Sahwa Movement, the Americans and the government they had established in Baghdad, was a promise that after the defeat of Al Qaeda the Sahwa fighters would be absorbed into the Iraqi army and policy such that the payments to them would be continued. However, after victory was achieved America and the government they had established in Baghdad reneged on their part of the deal. Only a fraction of the Sahwa fighters were actually given positions in the Iraqi security apparatus, but without exception at lower levels of these organizations as the positions of leadership were handed out to people from the Shi’a community that were more close to the Iraqi government in Bagdad.

Obviously this was seen as betrayal by the tribal leaders in Anbar. The Iraqi government in Bagdad then executed a comprehensive policy of marginalization of Sunnis, including arrest and murder of their political leaders, claiming that the dissatisfaction on the side of the Sunnis from Anbar province showed they were not loyal to the new Iraqi state. [9]

It is not correct to see the expulsion of the central government from the town of Mosul on the 10th of June as the start of the current situation of unrest in Anbar province. Mosul would more accurately be described as a chain in a series of events, the origin of which can be traced back to December of 2012.

During that month, namely, the policy of marginalization and oppression of the Sunnis in Anbar by the Iraqi government in Baghdad lead to mass protests in all major cities in the province. The trigger for these protests was the arrest of a prominent Sunni politicians from Anbar province named Rafi al Issawi, the finance minister in the Maliki government. [10]

The Iraqi government in Baghdad responded to the gathering of thousands of people on the streets of Anbar by sending in both hired thugs and the national army. During the course of January and February 2013 these thugs supported by the army attacked the demonstrators on numerous occasions, with multiple casualties as a result. The Iraqi government in justified this heavy handed approach by claiming Al Qaeda in Iraq was behind the protests and was using them to strengthen its position. It even claimed the headquarters of the protest movement in Ramadi was in fact the Al Qaeda in Iraq headquarters. Under this cover it sent the army into Ramadi during December of 2013 to arrest one of the leaders of the protest movement, an MP from Anbar province named Ahmed al Alwani. [11] During the arrest some of Al Alwani’s bodyguards were killed, in response to which Islamic leaders in Anbar province called upon all Sunnis to take up arms against the Iraqi government in Baghdad. Just a few days later, on the 4th of January 2014, armed rebels took control of Fallujah and parts of Ramadi. From there the armed uprising spread until on the 10th of June Mosul was taken. [12]

The objective of the current uprising and the role of ISIS

In an interview on Al Arabiyya one of the tribal leaders in Anbar, Sheikh Ali Hatem al Suleiman, stated that the rebellion in Anbar was due to three key complaints by the people of Anbar:

Firstly, the breaking of promises to the Sahwa Movement by America and the Iraqi government in Baghdad.

Secondly, the policy of marginalization and oppression of the Sunnis in Anbar by the Iraqi government in Baghdad.

Thirdly, the ignoring by the international community – lead by America – of the complaints of the Sunni Muslims in response to the first two points.

Sheikh Ali clarified that the objective of the uprising was not to take over Baghdad, or to wage a sectarian war against the Shi’a and Kurds in Iraq. The actions taken had been chosen to put pressure on the Iraqi government in Baghdad, to force Prime Minister Nouri Al Maliki to step down and to form a new unity government in the place of the sectarian government he had established.

When asked about the role of Al Qaeda in the uprising, in particular the “Islamic State of Iraq and Syria (ISIS)” (following the start of the revolution in Syria the Islamic State in Iraq moved across the border into Syria and added “and Syria” to its name) Sheikh Ali made three important points.

Firstly, he said that Nouri Al Maliki had a history of shouting “Al Qaeda, Al Qaeda” whenever people rose up against his oppressive sectarian policies, with the aim of gathering international support for his policies. Secondly, the Sheikh said that ISIS was only a very small minority amongst the rebels in Anbar of maximum five to seven percent of all armed fighters. To prove his point the Sheikh referred to the speed at which the representative of the Iraqi government had been removed from Anbar province and the limited amount of fighting that had been require to achieve this. Clearly, he said, these facts showed that the tribes of Anbar were at the heart of the rebellion since no other party or movement could have had so much success, so fast, with so little effort. Thirdly, he said that the tribes of Anbar had always resisted terrorism and he referenced the support of the Anbar tribes in rooting out Al Qaeda during 2007 – 2009. This stance of the tribes vis-à-vis terrorism had not changed, he said. When asked why then the tribes allowed ISIS to be a part of the uprising, the Sheikh explained that the first priority of the uprising in Anbar was to stop the oppressive policies of the Iraqi government in Baghdad and that as soon as the Iraqi government in Baghdad gives in to the demands of the tribes, the tribes would deal with the remnants of Al Qaeda in their midst. [13]

Part 2 will look at the objective of the uprising and the role the ISIS is playing. It will also asses who benefits form the crisis and who potentially loses out

[1] “The Engineered Destruction and Political Fragmentation of Iraq. Towards the Creation of a US Sponsored Islamist Caliphate”, Professor Michael Chossudovsky, www.globalresearch.ca/the-destruction-and-political-fragmentation-of-iraq-towards-the-creation-of-a-us-sponsored-islamist-caliphate/5386998

[10] “Tensions Rise in Baghdad with Raid on Official”, The New York Times, www.nytimes.com/2012/12/21/world/middleeast/tensions-rise-in-baghdad-with-raid-on-sunni-official.html

Who Benefits from Zarb-e-Azab (Waziristan)?