In part 1 of RO’s Arab spring anniversary series, we covered Libya in its second anniversary which continues to face immense challenges. In part 2 the birthplace of the Arab spring – Tunisia – was analysed and with the conclusion that the country remains in political gridlock as Ennahda abandoned Islam once in power. In Part 3 we analyse where the Arab spring stands in Yemen. By Adnan Khan The uprising in Yemen...
28th December 20136 min 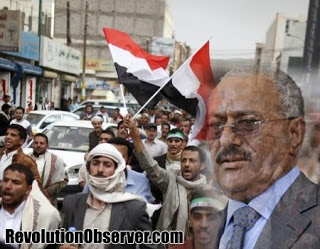 In part 1 of RO’s Arab spring anniversary series, we covered Libya in its second anniversary which continues to face immense challenges. In part 2 the birthplace of the Arab spring – Tunisia – was analysed and with the conclusion that the country remains in political gridlock as Ennahda abandoned Islam once in power. In Part 3 we analyse where the Arab spring stands in Yemen.
By Adnan Khan
The uprising in Yemen erupted simultaneously with Tunisia and Egypt. The uprising had one message only and that was Ali Abdullah Saleh must go. Saleh had been in power for 33 years and he either detained or killed many of his political adversaries ensuring he maintained complete hegemony over the country. Even a near-successful assassination attempt in June 2011, when an improvised explosive device (IED) exploded in the Presidential Compound Mosque, couldn’t force Saleh from power.[1] Despite burns covering 40% of his body, Saleh returned to Yemen after spending 16 weeks in a Saudi Hospital. With intense pressure from the US [2] to step down and transfer power, an agreement was carved out between the EU, US, Gulf Cooperation Council (GCC) and Saleh in February 2012 and power was transferred to Vice President Abd Rabboh Mansour Hadi.
Even though Saleh formally stepped down as President and elections took place in February 2012 (Hadi – was the only candidate) the political transition in Yemen in no way constituted regime change. The deal between the US, EU, GCC and Saleh merely gave Saleh a dignified exit. Ever since the power-transfer agreement was signed, and despite regular protests demanding that Saleh be stripped of his immunity and that he and his family face trial, Saleh’s family continues to hold many high-level positions throughout the government, business community and security forces. In fact, Saleh himself is still the head of the ruling General People’s Congress (GPC) Party. Despite this fact, the transfer of power in the country has been turned into a ‘model’ and Obama even proposed the ‘Yemen model’ as a solution for the uprising in Syria.[3]
Abd Rabboh Mansur Hadi struggled to consolidate his grip on power. After being elected as President in February 2012, Hadi began efforts to weaken Saleh’s and his family’s grip on power. Hadi removed various military leaders loyal to Saleh, but the former President’s eldest son, Ahmed Ali Saleh, continues to serve as commander of the elite Republican Guard. Hadi attempted to unite the military and set up a 14-member military council to reform the armed forces. In August 2012 President Hadi announced a military restructuring designed to alter the balance of military power more in his favour.[4] This battle with army factions is leading to Yemen’s tribes taking advantage of the power struggle by striking deals with competing interests in order to get the autonomy they have wanted. Today President Hadi is still a long way from meaningfully consolidating power. Without a clear, centralized power base in Sanaa, neither President Hadi nor anyone else has been able to meaningfully address security problems all over the country.
In this context a UN-backed reconciliation process began in November 2012 aimed at drafting a new constitution and preparing for full elections in February 2014. The National Dialogue Conference (NDC) was convened with representations from various political parties, major tribes, youth movements and delegates representing South and North Yemen. 565 delegates were tasked with developing recommendations on how to address nine issues ranging from future relations between the feuding north and south, to state-building to the future role of the army to rights and welfare — all of which were meant to go into the writing of a new constitution. September 2013 was recognized as the deadline for the major tasks to have been accomplished, but that date passed with little progress. Deep divisions began showing between all parties involved. Initially, the dialogue attempted to explore commonalities between delegates representing the ruling General People’s Congress (GPC) and the Joint Meeting Parties (JMP), representing the opposition. However, conflict soon ensued between members of the JMP themselves.
The biggest problem in Yemen is foreign interference. The US used the war on terror to undermine Ali Abdullah Saleh by accusing Yemen of being a hub for Al Qaeda. Ali Abdullah Saleh attempted to appease the US with a host of security guarantees which allowed the US to carry out drone attacks in the country. The uprising gave the US the opportunity to remove Saleh, who however dug in his heels in the face of demands by his own people to leave. He eventually agreed to a transition deal – led by the Gulf Cooperation council (GCC) – another US tool. However Saleh with foreign help continues to undermine US interference.
The people of Yemen rose up to remove a brutal dictator.  The uprising saw the collapse of government institutions and the army as many defected. However real change did not take place in Yemen; only a transfer of power within the ruling elite occurred. The difference is the current crony has little power. Abd Rabboh Mansour Hadi has struggled to deliver on any of his promises. In the Al-Shari’ newspaper, in its 634th edition issued on 8th October 2013, the paper published details of President Hadi’s discussions in two important military and security meetings held in September and October 2013. The newspaper mentioned a source who attended the meeting quoting Hadi, speaking to the military and security leaders that attended the meeting: “We all agree that the state has lost the ability to control and lost the ability to create security while it is infiltrated from within.” These remarks came amid Yemen suffering from the loss of security and an increase in murders and suicide cases due to the poor living and economic conditions. 3 years since the initial uprising, Yemen remains marred in chaos.